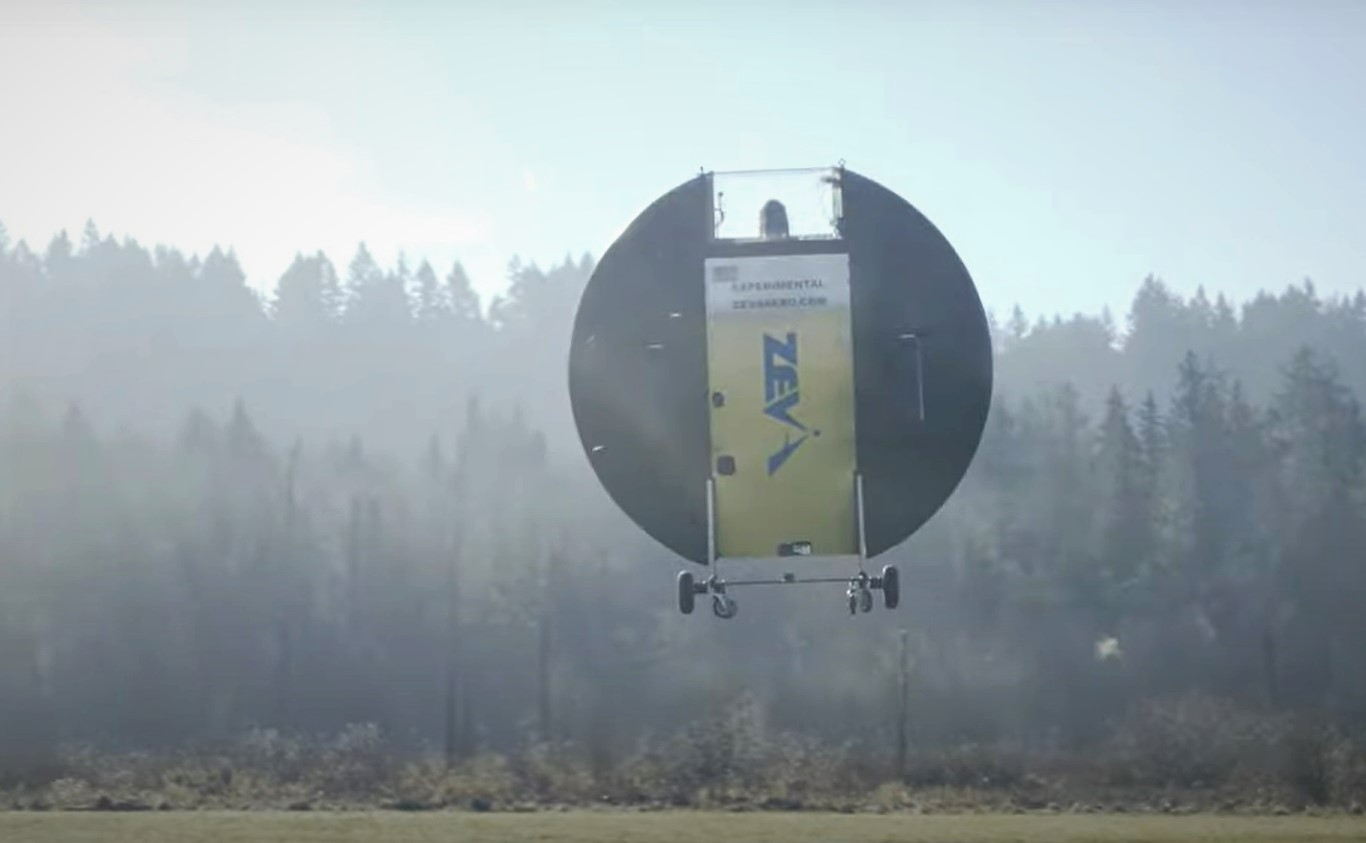 After years of effort, Tacoma, Wash.-based Zeva has executed the first untethered, controlled flight test of its full-scale flying machine — a contraption that looks like a flying saucer.

The demonstration was conducted Jan. 9 in a pasture in rural Pierce County, not far from Zeva’s HQ. During four separate sorties, the Zero aircraft added up to more than four minutes of controlled hovering, simulated taxiing maneuvers at slow speeds, and limited vertical-climb maneuvers.

Zeva’s flying saucer is an electric vertical-takeoff-and-landing craft, or eVTOL, that’s powered by four pairs of rotors. It’s designed to lift off vertically with a single pilot, and then transition to a horizontal orientation to fly at speeds of up to 160 mph with a range of up to 50 miles.

“This is a huge inflection point for Zeva as we join an exclusive set of proven flying eVTOL platforms, and a testament to the relentless hard work and ingenuity of our entire team over the past two and a half years,” Stephen Tibbitts, Zeva’s CEO and chairman, said today in a news release.

The company traces its origins back even further — to the Boeing-backed $2 million GoFly Prize competition, which got off the ground in 2017. Zeva was one of the teams vying for the $1 million grand prize, which went unwon in 2020.

Despite setbacks, Tibbitts and his team continued to work on the Zero aircraft. Over the past year, the company made some key hires, completed more than 50 successful tethered flights, showcased Zero at November’s Dubai Airshow, and won a grant from Washington’s Joint Center for Aerospace Technology Innovation.

“The Zeva team has done an incredible job with the design and manufacturing of this aircraft, which was evidenced in this exceptionally smooth and successful first flight,” said flight control engineer Gus Meyer, who guided Zero through the test via a remote radio link.

A mannequin was placed inside the cockpit to stand in for a human pilot.

During a phone interview, Tibbitts told GeekWire that the success of this week’s test sparked “huge elation” among team members.

“We’ve been trying to take this hill for a long time,” Tibbitts said. “Part of what I’ve been this week is saying, ‘Jeez, what’s next?’ Specifically, how to take the next hill.”

Once Tibbitts and his teammates are finished assessing the results of the first flight test, they’ll aim to expand the envelope for further hover flight tests, and move on to transition-flight testing as early as this spring.

Zeva is in the midst of a equity crowdfunding campaign that’s being conducted on the StartEngine platform. Eventually, the company plans to take pre-orders of the Zero for a $5,000 deposit, with a target price tag of $250,000 or less for the first production units.

“Our long-range goal is the consumer, but there are a lot of pieces that have to be put into place before that happens,” Tibbitts said. Getting the flying saucer certified by the Federal Aviation Administration will be a crucial step.

The first customers may well be first responders and emergency workers in areas where getting around is particularly challenging. “Where there is no infrastructure, those kinds of vehicles are perfect,” Tibbitts said.