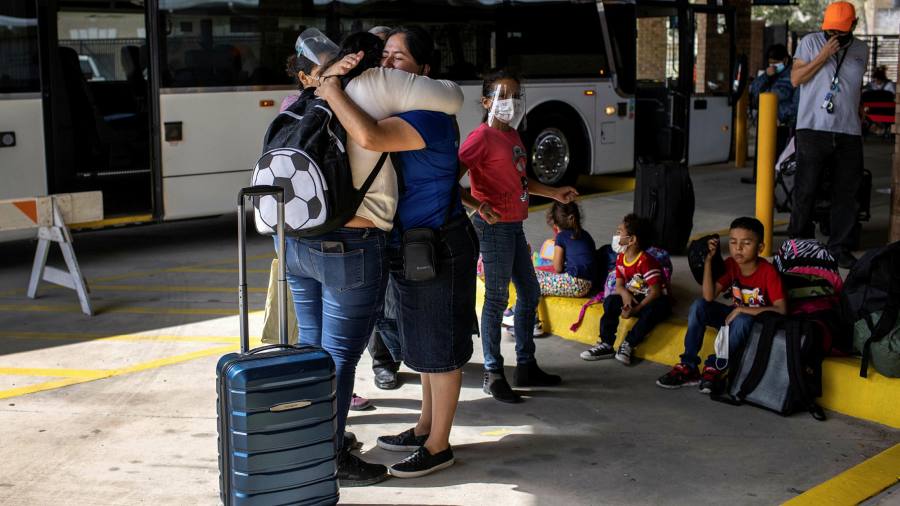 Alberto, a 22-year-old factory worker in northern Honduras, is trying to save up the equivalent of a year’s salary so he can leave the country.

He is not the only one: of 20 or so classmates from his school, half have already left for the US, and three lost their lives on the journey, he said.

“Here it’s about getting out of the country as fast as you can,” said Alberto, who lives outside the city of San Pedro Sula. “Honestly I don’t foresee anything productive from being here.”

For decades, Central Americans have left home for the US for a host of reasons, from civil war to lack of job opportunities. In recent years, some have opted to travel in larger groups known as caravans that can make the trip safer and cheaper but have also grabbed political attention in the US.

Their numbers are growing. US border patrols encountered more than 1.7m migrants at the south-western land border in the 2021 fiscal year, the highest annual total in recent years. Almost 320,000 of those were from Honduras — equivalent to 3 per cent of the country’s population.

The rise in the number of Hondurans leaving coincided with more than a decade of political instability, experts said, including a military coup in 2009, allegations of electoral fraud and a crackdown on protests in 2017, and a deterioration in the rule of law in recent years.

The country has the second-highest poverty rate in Latin America and the Caribbean, according to the World Bank, with unemployment, underemployment, and low wages widespread.

More than half of high-school students hope to leave the country, according to researchers at the Observatory of International Migrations at Flacso Honduras.

“Fundamentally they see migration as the only way to improve their economic situation, or the way to get out of insecurity,” said Rolando Sierra, director of Flacso Honduras. “The sociopolitical situation in the last 10 years is what has generated more migration.”

The departure of so many people, especially younger ones, will present a huge challenge for the country’s next president, Xiomara Castro, who takes office this month after winning in a high-turnout landslide in November. On migration she has promised to create job opportunities, reduce commissions charged for remittances and work to protect migrants who leave the country.

The US has said it wants to address the root causes of migration in Honduras, El Salvador and Guatemala, known by the US collectively as the Northern Triangle. Kamala Harris, US vice-president, published a 20-page plan in July that laid out a vision for the strategy, which focuses on tackling corruption, inequality and lack of rule of law.

But little new US funding has materialised, and reducing migration means addressing deep structural issues at a local level in a way that may not fit political timelines, according to experts.

“No matter how much money you invest, no matter who is president in Honduras or in the United States it will take years to actually address irregular migration from Honduras,” said Ariel Ruiz Soto, a policy analyst with the Migration Policy Institute. “We need to set realistic goals to get things done.”

The US government recently said it would work with Mexico to extend President Andrés Manuel López Obrador’s key social programmes into the Central American countries. The programmes give scholarships for young people to work or for farmers to plant trees, but have been criticised at home for being badly designed and even causing deforestation.

Economic factors are consistently cited by migrants as their main motivation for leaving, including in a recent survey by a group of institutions including the UN World Food Programme and MPI.

Those economic factors are often also intertwined with problems of violence, corruption and, increasingly, climate change, which can lead to crop failure or severe hurricanes. The loss of so many young Hondurans also weighs on the local economy. By 2030 the economically active population would be shrinking, instead of growing, if current migration trends continued, said Sierra of Flacso Honduras.

Maria, 24, who asked not to use her real name, was internally displaced within Honduras after her husband was murdered by gangs for not making extortion payments for the bus they operated.

“Everything you earn is for them [the gangs],” she said. “You maybe get to keep a little of it . . . these people don’t have a heart.”

Even if she sold the bus, the gang said it would take the money. She decided to flee her neighbourhood in the industrial city of San Pedro Sula and lost her source of income to support two children.

For several months, Maria has been receiving financial aid from a Mexican programme called Young People Building The Future. The initiative is meant to get young people into work, though she said she used the funds to study and take care of her kids. The aid was temporary, and leaving for the US was still an option, Maria added.

The quicker the US, Mexico and Castro’s new government took up the issue and other structural problems such as corruption, experts said, the more likely it was to succeed.

“We’ll . . . have to see how the new administration manages expectations of change and transformation,” said Sierra. “It has to give answers relatively quickly and depending on that there will or won’t be more caravans.”

But Alberto, the factory worker, doesn’t think it’s worth waiting around for Castro or the US’s plans to materialise, underscoring how hard it will be to change things.

“To take back the country, seeing how it is right now, I don’t think she can take it back that quickly,” he said. “The situation is worse every day . . . energy, water, everything is sky-high and honestly the minimum wage doesn’t cover it.”