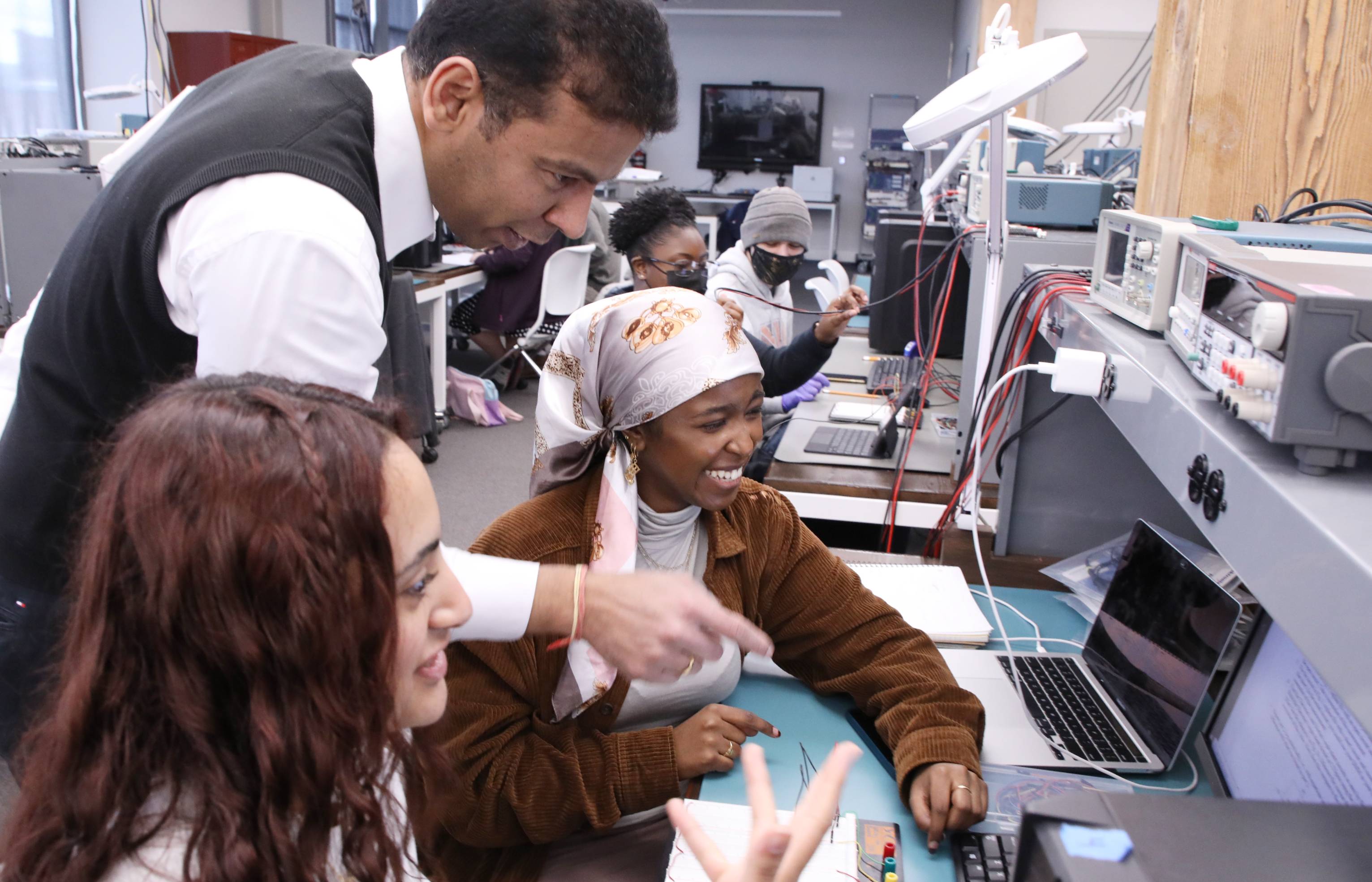 You’re young, you’re ambitious, you love tech. Your heart is set on the nationally ranked Paul G. Allen School of Computer Science & Engineering at the University of Washington. Except, like 93% of your fellow freshman direct applicants, you don’t get in.

“Just be open. There are other options,” said Tatiana Linardopoulou, who last year earned her computer science degree from UW Tacoma. A UW education is a quality education, she added, regardless of campus location. “The UW is the UW. The satellite campuses are still really good.”

Educators and students from the other institutions acknowledge they don’t have the Allen School’s prestige factor and some of its resources. But, they counter, their programs offer benefits that UW Seattle often cannot. That includes smaller classes and easier access to professors.

Linardopoulou first earned a psychology degree from the UW’s main campus, home to 42,000 undergraduates. When she later decided to study computer science, she recalled feeling overwhelmed and unconnected at the Seattle location. Visiting UW Tacoma, the smaller setting felt right. Plus, its faculty included two accomplished professors in cryptography, a specialty that interested her.

“It felt really welcoming,” Linardopoulou said. So she enrolled. She got involved, serving as president of the entrepreneur’s club. “Because of the smaller size of the community and the clubs, I felt more comfortable putting myself out there.”

Her younger sister and brother, however, set their sights on the Allen School, applying as transfer students after attending two-year colleges, her brother with a 4.0 GPA. Neither got in. But the odds were against them.

As GeekWire recently reported, soaring application numbers have made the UW’s elite Allen School even more competitive. Roughly 16% of transfer students are accepted into the program. Allen School officials are lobbying for more funding to keep growing their program and regret their limited space.

RELATED: ‘It is not acceptable’: UW computer science program can’t keep up with record demand from undergrads

“We are heartbroken at the large number of outstanding Washington students that we are unable to accommodate,” said Ed Lazowska, an Allen School professor.

After some tears over the rejection, Linardopoulou’s sister found success in UW Tacoma’s computer science program. Her brother switched to UW Seattle’s atmospheric sciences. He now works in software development.

Linardopoulou herself is a technical program manager at Namatad, a startup launched by one of her professors that provides technology for emergency responders and the military.

The UW Tacoma and UW Bothell computer science programs date back more than two decades. Even in the late 1990s there was recognition that the state’s schools weren’t meeting the demand for workers in an increasingly hot tech economy. Now the two UW programs combined have nearly 1,100 undergraduates enrolled. They’re outpaced by the Allen School’s 2,000 undergrads, but make a significant contribution to the workforce.

“Computer science and software engineering is a superpower,” said Bill Erdly, division chair for the Computing & Software Systems program at UW Bothell. For graduates, “it’s your job to go out there and do something good with this.”

So where can students develop this superpower?

All of the schools also offer related technology and engineering programs in addition to computer science.

In 2016, Bellevue College received permission to become the first community college in the state to offer a bachelor’s degree in computer science. Five students signed up for the initial cohort. The college is now admitting 84 students a year spread over three quarters. Some of the state’s other colleges are looking to follow Bellevue’s lead and create similar programs.

While it has grown quickly, Bellevue College still has a relatively small program — which means it can be nimble like a tech startup.

“We can adjust very quickly,” said Fatma Cemile Serçe, Computer Science program chair at Bellevue College. “We want our students to be ready for the current industrial needs.”

The program, for example, is collaborating with Amazon to bolster its cloud computing instruction and also offers instruction in machine learning.

With its proximity to Amazon and Microsoft, Bellevue draws on talent from the tech giants for its educators. Faculty, who are still required to have either a master’s degree or Ph.D., often include current or former tech professionals. Once students are admitted to the program, they’re assigned a faculty advisor who can help with career planning, resume building, and collaborating with other faculty.

Since Bellevue College doesn’t have advanced computer science degrees, there are no graduate student teaching assistants providing instruction. “There is not a layer between students and faculty,” Serçe said.

Erdly founded the computer science program at the UW Bothell campus back in 1996. It now has about 640 undergrads.

The university offers a bachelor’s degree in Computer Science & Software engineering, which Erdly said incorporates management of people and products. That can include learning about the cost implications, customization, risk management and legal aspects of software development. The program strives to help students develop software that serves sectors such as healthcare and aerospace.

“Writing code sometimes is the easy part,” Erdly said. “If you build wonderful software that programmers like but people don’t want to use it, you have a problem.”

“Once our students are in the door, they advance pretty quickly because they have these other elements that are less technical and more human elements,” he said. “People see that in our students and they really like them. They’re innovative and creative and know how to write.”

Other areas of technical focus at UW Bothell include cybersecurity and the university is creating a data science minor.

The program is working to expand its enrollment of underrepresented students in computer science and is developing faculty and industry mentors to connect with pre-majors who’ve had less exposure to the tech sector.

Andrew Fry is director of Industry Partnerships and a lecturer with UW Tacoma’s School of Engineering and Technology. The program has transformed lives and the surrounding community, he said, creating a tech economy in the region south of Seattle. As the program has grown, it has retained smaller classes.

“I think our programs are exceptional because we have the class size of a private institution for a public university,” Fry said. Courses top out at around 35 to 40 students. About 430 undergrads are currently enrolled.

Grads are going on to work at tech giants like Microsoft and Amazon, as well as startups — some that they’re launching themselves.

The department hosts research showcases where faculty give two-minute pitches on their research. Students can pick an instructor to work with while earning credit towards their degree. Each year, about 100 students are teamed up with faculty members for research projects.

The Bellingham, Wash.-based computer science program has seen significant growth, doubling to 28 faculty members since 2015. Some 477 undergrads are enrolled in the degree program, with an additional 330 pre-majors.

“The demand is just ridiculous and we’re doing our best,” Jagodzinski said. While the department grows, they’re keeping smaller class sizes, including for intro courses.

One effort to make sure students aren’t lost in the shuffle, and particularly underrepresented students in tech, is Western’s mentoring initiative. It pairs older students with undeclared undergrads who are curious about computer sciences.

It can be a powerful message “when a student who is just a year older than you says, ‘Come join this major,’ Jagodzinski said.

“This is a different kind of STEM graduate,” said Amit Shukla, dean of Seattle University’s College of Science and Engineering. “They come with a sense of purpose.”

Seattle University is a Jesuit school with about 330 undergraduates in its computer science program.

The Jesuit paradigm “is not about the scriptures,” Shukla said. “It is about the morality and ethics, and discernment and reflection.”

RELATED: Seattle U students tackle real-world computer and engineering projects for Amazon, F5 and others

When students tackle a challenge, he said, “they are not only thinking about what is the fastest way to get to a solution.” They are considering whether it’s environmentally sustainable, equitable and right for the community.

The university is not research-focused, but driven primarily by its teaching mission. Faculty come more from academia than industry.

Like all of the schools, Seattle University has been scaling up to meet increasing numbers of tech-focused applicants. In the last three years, enrollment in computer science has doubled.

Editor’s note: This story has been updated to correct the tuition for Bellevue College. The original figured provided by the college included transportation and other costs.