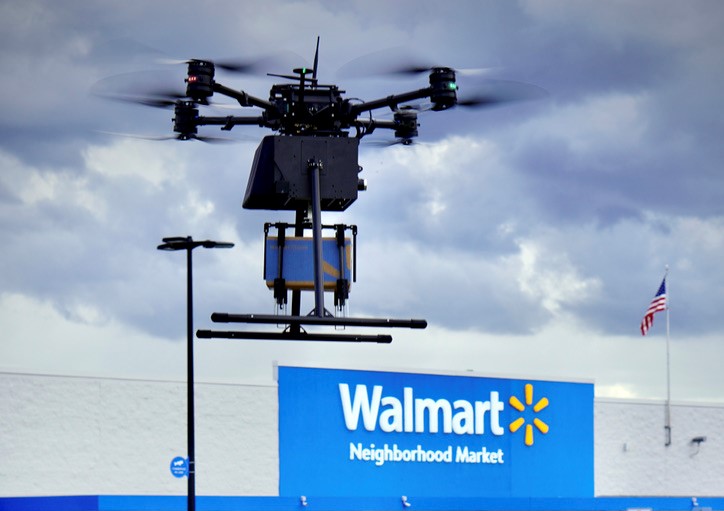 Walmart is partnering with Virginia-based DroneUp on a network of drone delivery hubs, starting with a neighborhood market in Farmington, Ark.

The move appears to put Walmart ahead of its retail rival, Amazon, in expanding the frontier for aerial deliveries. Amazon announced its drone development program back in 2013, and two years ago, the company said regular drone deliveries were mere months away. Recent reports, however, have hinted that Amazon Prime Air’s progress has slowed down significantly.

We’ve reached out to Amazon and will update this report with any response.

Today’s announcement about the first delivery hubs in Arkansas comes five months after Walmart made a strategic investment in DroneUp and signed a contract that expanded the companies’ pilot project for drone deliveries. (The amount of investment was undisclosed.)

“When we invested in DroneUp earlier this year, we envisioned a drone delivery operation that could be quickly executed and replicated across multiple stores,” Tom Ward, senior vice president of last mile at Walmart U.S., said in a news release. “Opening our first hub within months of our initial concept showcases DroneUp’s ability to safely execute drone delivery options with speed.”

The first hub is based at a Walmart Neighborhood Market in Farmington, which is part of a larger metropolitan area in the northwest corner of Arkansas. The next two hubs are planned nearby at Walmart stores in Rogers and Bentonville.

DroneUp is at least as visible as Walmart in the delivery operation: Customers first check their eligibility on the DroneUpDelivery.com website, based on their street address. If they live in the vicinity of the drone hub, they can shop online for a limited selection of deliverable goods on the website, then pay a shipping charge on the order of $10 to get the goods delivered via an airdrop.

The shipments — limited to a total of 5 pounds each — are packed up in boxes and sent out from the DroneUp hub located next to the Walmart store. A flight operator monitors the camera-equipped drone’s progress from a control tower erected at the hub. That avoids the tangled regulatory issues that would be raised by flying a drone beyond the operator’s line of sight. Deliveries can be made in as little as 30 minutes, and the hub’s operations are designed to support multiple flights per hour.

DroneUp says it’s working closely with the Federal Aviation Administration to ensure the safe operation of drones in the national airspace, and has more than 190 active waivers and authorizations to support its flights across the U.S.

The company says its system provides “a safe, fun and convenient way for Walmart shoppers to get smaller packages delivered by drone directly to their homes as quickly as 30 minutes from the time of order.”

In the years ahead, Walmart aims to become the leader in drone deliveries, thanks to its network of more than 4,700 U.S. stores. Theoretically, each store could host a hub for neighborhood airdrops. But to be competitive, the per-delivery price will almost certainly have to be less than $10, and the restrictions governing remote drone operations will almost certainly have to be relaxed.

The FAA is still working with industry partners, including Amazon, on the technological capabilities and regulatory requirements that will have to be in place for widescale operations involving autonomous delivery drones.

Over the past several years, Amazon has tested drones in Washington state and just across the U.S.-Canadian border in British Columbia, and it established drone development teams in Britain, France, Israel and Austria. In 2016, Amazon revealed that it was doing trial deliveries in an area around Cambridge in England; and in 2019, Amazon’s Jeff Wilke unveiled a go-cart-sized drone that he said would be “delivering packages to customers in months.” (Since then, Wilke has left Amazon.)

That timeline never came to pass. Amazon Prime Air did manage to win the FAA’s official certification as an air carrier last year, and Amazon insists that it’s still committed to turning its drone delivery dream into reality. The company currently lists more than 100 open positions at Amazon Prime Air, with most of them based in the Seattle area. But there are also signs that Amazon has downscaled its plans for drone deliveries.

Even before the FAA certification, the Amazon lab that was working on drone development was repurposed to focus on innovations to fight the COVID-19 pandemic. In August, Wired UK reported that Amazon’s British drone team was being downsized after struggling with managerial and technical challenges. And this month, Bloomberg News reported that employees at Amazon’s Paris-based drone R&D center have been reassigned to other projects.

Meanwhile, other companies including UPS (which is partnering with the CVS pharmacy chain), Wing (the Alphabet drone venture pioneered by Google), SkyDrop (formerly known as Flirtey) and Zipline (which is also partnering with Walmart in Arkansas) are racing to widen their trials of drone delivery services. Thanks to the partnership with Walmart, you can now add DroneUp to the list of front-runners.