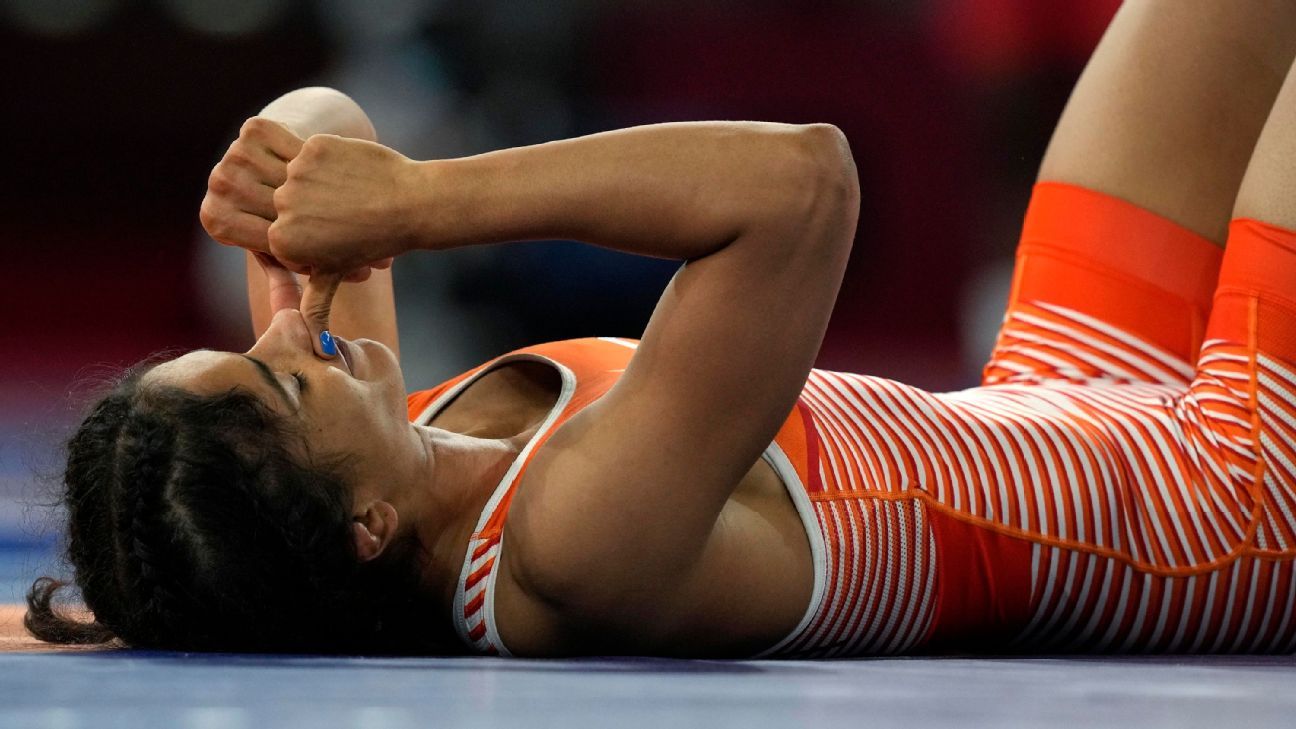 With several big-ticket sporting events lined up in 2022, including the Asian and Commonwealth Games, we look at athletes for whom this could be a big year. First up: Wrestler Vinesh Phogat, who aims to bounce back from Olympics setback and the physical and mental troubles that followed thereafter.

Vinesh Phogat has slightly morbid souvenir of a surgery she underwent in September last year. The tiny, razor-sharp shards of loose bone fragments that once sent shocking bolts of pain through her right elbow are now extracted and sit in a small box at her home in Kharkhoda. Or at least what’s left of them. As the weeks have gone, those fragments have disintegrated further. “Some time back when Neeraj (javelin thrower Neeraj Chopra had a similar surgery in 2019) had his elbow surgery, he told me the same bone fragments disappear due to exposure. I didn’t think it was possible but it’s true. They are almost disappeared completely now. You can hardly see them,” she says.

Phogat’s memories of a harrowing 2021 will probably take slightly longer to fade away though. The 27-year-old had started the year as one of India’s best medal prospect at the Tokyo Olympics. After a shock defeat, she would end up being hounded by Wrestling Federation of India officials. Threatened with suspension over unsubstantiated charges of indiscipline. Admitting to suffering from depression. An attempted return to the sport at the selection trials for the World Championships ending after conceding a match because of blurred vision – a recurring condition that stemmed from a concussion in 2017 that she’d kept hidden for years. And then to wrap it all, there was the surgery on the right elbow.

The last was perhaps the hardest to deal with for it meant that she wasn’t allowed to train at all for several months. In the past she’d probably have shrugged off the surgeons’ advice but a horror story from Olympic champion Neeraj Chopra had scared her. “He called me after the surgery and told me that he had tried to return too quickly and the sweat ended up dissolving his stitches and he had to wait even longer to return,” she says.

It was an enforced break – the first she’d had in many years. Husband Somveer would do his best to cheer her up. Vinesh says she’d smile but only seethed inside. “More than anything I loved to be on the mat. Even before I won any medals or even thought I would go to the Olympics one day. To be told I couldn’t do that was almost like torture. You don’t feel like eating or sleeping. You start wondering just where your life is going. You see that you are getting up and going to sleep and not really doing anything else. It was just mentally very stressful. There’s so much anger and frustration inside me and it can’t even go through training. Training helps me get rid of that stress. When you are fully fit and take a break it’s different. When you do it because there isn’t any option, it’s a problem,” she says.

Over the last few days though, Vinesh has started finding her happy place once again. Allowed to return to the mat a month ago, she’s started training but at a lower intensity. “I don’t go a hundred percent. I’ll give up a position rather than fight too hard for it. I’m a very competitive person but I’m grateful I can be on the mat once again. I’ve been told I’m really boring. But I’m happiest is when I can go to train. Give me a small room and food and allow me to train twice a day. I don’t need vacations or anything,” she says.

In the absence of full training, she found some pleasure in helping out younger girls at the Sports School in Kharkhoda. “They’ll come up to me and say didi teach us something. I think I can explain things well. They’ll make very basic errors, they might not keep their neck up and that if I point out, they’ll learn a lot,” she says.

That recognition is something Phogat says she values far more than her achievements. “If two kids can say we learned from you, that’s more rewarding than anything I’ve achieved so far. I’ve won some medals and I’m sure others will have great performances in the future as well. But being someone people look up to would give me more happiness. When I was competing in the trials, there were girls who I was competing with who told me that and it felt nice,” she says.

It seems strange for Phogat to say she doesn’t find any of her achievements – bronze medal at the World Championships, gold medal at the Asian Games and the only Indian woman wrestler to compete at two Olympics – worthy of much pride. Some of that is due to expectations she has of herself. “What’s the big deal about a world bronze? There are girls from Japan who have ten of them. Where am I compared to that? Sushil Kumar has two Olympic medals. I don’t even have one. I think I’m unsatisfied because I believe I have the potential to get it. I’m not satisfied because that hunger hasn’t been met,” she says.

That’s why 2021 still rankles. “I spent more time coming to terms with challenges last year than doing anything. It’s been hard but that’s what has been written for me,” she says.

If there’s any positive she can take from that train wreck of a season, it would be the support she got when she least expected it. “There was a time when I was looking at suspension, when I thought that I was finished with the game. At that time I got so many letters from people who wanted me to know that they were hoping for me to do well. They didn’t have my address so they sent it to my marketing agency. Initially I thought there would be 10 people at most who would care but I got hundreds of letters and emails. That’s what picked me up at my lowest point,” she says.

Phogat says she owes it not just to herself but to all those who believed in her to fulfil her potential. “I’ve printed out all those letters and I’ve read them. One day I’ll let those people know how much they supported me emotionally at that time. Even though I didn’t have a medal, at least I’ve had that much support from people,” she says.

Much like how Vinesh now looks to guide younger wrestlers, she remembers something two-time Olympic medallist – and now disgraced wrestler – Sushil Kumar once told her. “During the 2014 Commonwealth Games, he told me ‘beta never take a defeat to heart. Always remember hard work never goes to waste. It might not pay off immediately but it never goes to waste’,'” she recalls. “You have to accept that something has happened and work towards not repeating it. The faster you come to terms with it, the faster you can start figuring things out,” she says.

Phogat knows she’s not the only one who had to deal with despair. A day before her Olympic campaign started and ended, the same happened with three-time World medallist Odunayo Adekueroye. The Nigerian was expected to coast to the final but was pinned in the first round in a bout she was dominating until that point. “Later on people would tell me that she spent the rest of the day crying. I of course knew what she was going through and I thought to myself if crying solved anything, I would know,” she says.

India’s top wrestling prospect this time last year, Phogat knows she’ll have to start from scratch once again this new Olympic cycle. It’s something she’s looking forward to. “All the hype that I got before the Olympics and all the curses I got after are done now. Gaaliya (abuse) and tareef (praise) are finished. Now If I do something, I’ll get gaali or tareef after another three years,” she says.

But this time Phogat is making some changes as she prepares for another Olympic bid – she will focus on her mental well-being as much as her physical training. “Until last year I used to think that if I train hard enough, my mind will automatically follow as well. That combination is important. You have to give your mind as much priority as your mind. I sometimes wouldn’t do that. When you are winning, you ignore any warning signs. But when you lose, you can think of all the little mistakes you made that added up. Of course there’s a chance you might doubt everything you do but it’s important to talk to the people who you trust. It means talking to a psychologist. I write my thoughts constantly now. I’m listening more to people I trust,” she says.

Phogat plans to make her 2022 return at the Rome Ranking series early next month. While she knows she won’t be completely fit just yet, she’s itching to get back to competitive action. She’ll be doing so without a coach after Hungarian Woller Akos returned home after the Olympics. While husband Somveer is supervising her training sessions these days, she knows it isn’t a long term plan.

Her biggest concern though is a recurrence of the disorientation and blurred vision she’s suffered from periodically following a concussion in training back in 2017. It’s an issue that flares up with no warning sometimes in the most inopportune times – like at Tokyo. “In the past I assumed it was because of a bad weight cut but now I know it’s because of a concussion. Doctors have done tests and they think that sometimes my blood vessels aren’t carrying enough blood. It’s almost as if there’s an internet supply to my brain and it starts hanging. I’m now taking medications for it and I’ve been told it will be a year till I have an idea whether it’s working or not,” she says.

Phogat isn’t the first wrestler to deal with the after effects of a concussion. Rio Olympic champion Helen Maroulis too struggled with a similar condition before eventually recovering and winning a bronze in Tokyo. For Phogat though there’s no certainity of a similar happy ending. “Concussions affects different people differently. No one really knows why my condition affects me in some competitions and not in others. I might make a leg attack and there will be times, my head will hit the opponent’s legs and immediately my vision will get blurry. And at other times, I’d not have any symptoms immediately but a month later, I’ll have the same problem. For now it’s my permanent companion,” she says.

For now Phogat is simply glad to be on the mat. As her injuries continue to heal and the bone fragments fade away to slivers, Phogat will continue to pursue what the fulfillment of her Olympic destiny. But she’s looking forward to every little competition along the way. “Just because I’ve won the Commonwealth Games or the Asian Games in the past doesn’t mean they don’t have any value to me anymore. In fact as I’ve started training once again, that same excitement is building up for those competitions. Every wrestler lives for competition and the chance to win. It’s the same for me. I’ll start off small and get to the top once again,” she says.