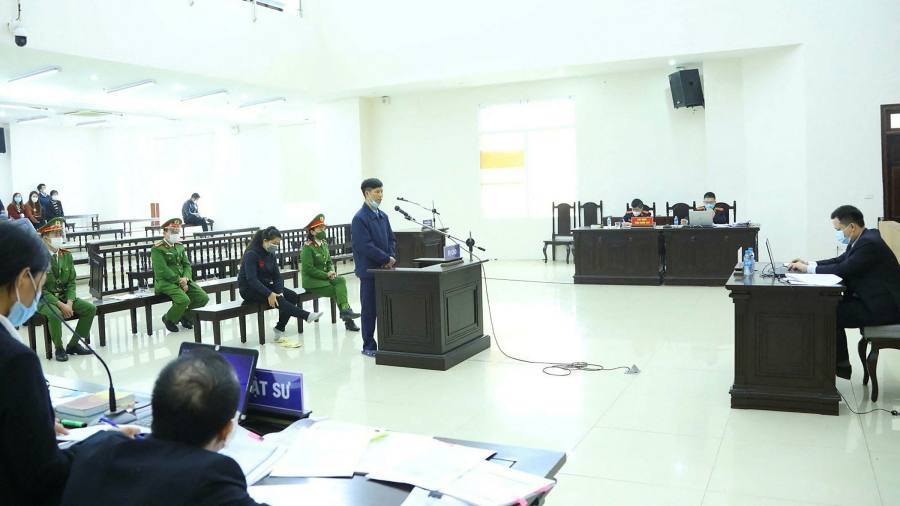 A Vietnamese court on Thursday jailed a human-rights activist for 10 years, the fourth dissident to have been given a stiff prison sentence in three days in what campaigners said was an intensifying crackdown by communist authorities on peaceful dissent.

Do Nam Trung, 40, was found guilty by a court in Nam Dinh province, northern Vietnam, of disseminating anti-state propaganda. After his prison sentence he will be given four years’ probation confining him to his home area.

Over the past two decades, Trung has taken part in pro-environment and anti-China protests, and posted online criticism of government corruption and suspected fraud at tollbooths on Vietnamese highways.

He was previously jailed for 14 months after being arrested in 2014 while photographing and filming a protest critical of China, a politically sensitive issue in Vietnam. The countries’ ruling communist parties have friendly ties but suspicion of China is widespread among ordinary Vietnamese and has sparked protests and unrest.

On Tuesday, a court in the capital Hanoi sentenced Pham Doan Trang, one of Vietnam’s most prominent activists, to nine years in prison — more than prosecutors requested — for spreading anti-state propaganda.

Trang, who is 43, had taken part in peaceful protests against government policies, led pro-environmental activists, and attended the trials of fellow activists. Authorities accused her of “defaming” the government by speaking to foreign journalists. The US condemned her imprisonment.

On Wednesday, Trinh Ba Phuong, 36, and Nguyen Thi Tam, 39, were sentenced to 10 and six years respectively in Hanoi for circulating anti-state content. The pair had taken part in protests over land rights.

“They think that when they arrest all the high-profile activists like these four, they can silence all activists,” Nguyen Quang A, a prominent activist, told the Financial Times. “They are sending a very clear message that we, the police, can arrest anybody.”

Vietnam’s government did not respond to a request for comment.

The Communist party of Vietnam in January reshuffled its leadership, naming Pham Minh Chinh as prime minister and endorsed Nguyen Phu Trong for a second five-year term as CPV general secretary. Trong has led a high-profile anti-corruption campaign and clamped down on political dissent.

A human rights campaigner described this week’s guilty verdicts as part of a concerted push by Vietnam’s government to silence dissent at a time when the international community was focused on the pandemic.

“We think that the Vietnamese government is trying to eradicate the dissident movement as it exists now,” said Phil Robertson, deputy Asia director with Human Rights Watch.

“They are trying to lock away remaining activists so that when the world awakes from its Covid-19 preoccupation, they will see the slate has been swept clean.”

Le Trong Hung, another arrested dissident, is due to be sentenced on December 31.