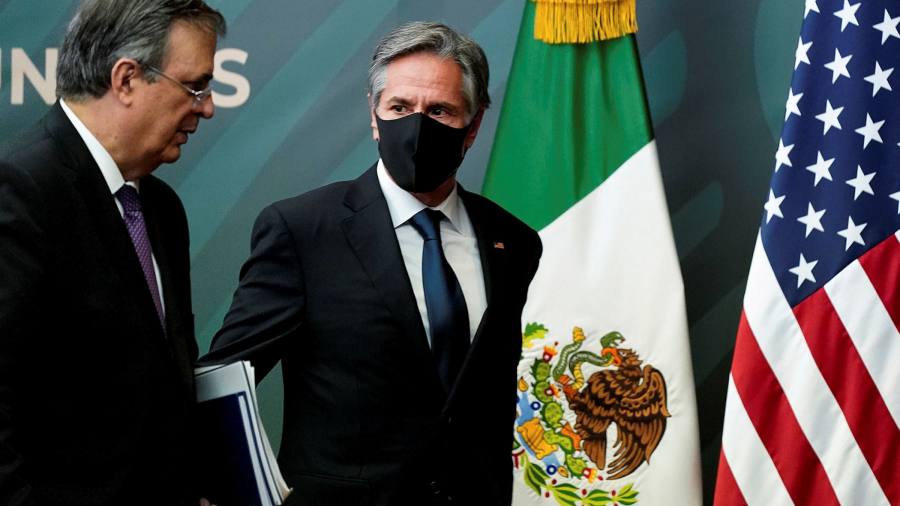 Top US and Mexican officials met on Friday to try revitalise a bilateral security relationship that has been blighted by the high-profile arrest of a former Mexican defence minister last year.

Having just sought to patch up relations with France after the fallout from the Aukus submarine deal, Antony Blinken, US secretary of state, met Andrés Manuel López Obrador, Mexico’s president, to discuss migration, drug trafficking and criminal justice.

The two sides outlined a broader framework for security co-operation including work on substance abuse, social programmes and port controls to block passage of chemicals used to make synthetic drugs.

“It’s time for a comprehensive new approach to our security co-operation,” Blinken said in Mexico City on Friday.

The US state department said on Thursday that it hoped to have a detailed plan by the end of January 2022. Some see the mere existence of high-level talks as a step forward for the rocky relationship between the countries, which share a border that is nearly 2,000 miles long.

“The fact that we’re talking again is enormously important,” said Pamela Starr, a professor at the University of Southern California who has advised both the Mexican and US governments on foreign affairs. “Talking and collaborating is the first step to getting stuff done.”

In response, Mexico’s government launched a campaign to have him released, calling the allegations baseless, and passed a law limiting the activities of foreign agents on Mexican soil.

The US ultimately relented and dropped the charges, citing “sensitive and important foreign policy considerations”. But when Mexico later published hundreds of pages of evidence from the case, Washington threatened to end criminal co-operation.

A cornerstone of the bilateral security relationship has been the Mérida Initiative, a US funding stream that became synonymous with military equipment for Mexico’s war on drugs. Mexico had asked for it to be replaced.

Blinken said on Friday that after 13 years of Mérida, it was time for something new to tackle to root causes of the countries’ security problems.

Alejandro Mayorkas, US homeland security chief, also attended the meeting. Immigration through Mexico has become a political problem for president Joe Biden, with the US authorities’ handling of the arrival in September of thousands of Haitian migrants at the border drawing widespread condemnation.

In recent years, the US has pushed Mexico to step up enforcement against migrants, including the use of the National Guard and deportation flights. That reliance has made Washington reluctant to criticise López Obrador publicly about other policies, experts said.

“There’s no question in my mind the Biden administration is trying to be as quiet and as diplomatic as they possibly can with López Obrador,” said Starr from the University of Southern California. “They just don’t have the political space in the United States to lose Mexico’s co-operation on migration.”

The US-Mexico security relationship has long been focused on drug trafficking and related violence. Since 2007, Mexico has seen a surge in its homicide rate, with organised crime infiltrating government, almost 100,000 people missing, and hundreds of thousands displaced from their homes.

López Obrador has taken a less confrontational approach to the country’s drug cartels than his predecessors, in what he calls a “hugs not bullets” strategy. In a seminal moment in 2019, his government released the son of notorious drug trafficker Joaquin “El Chapo” Guzmán not long after capture to avoid civilian deaths.

“There is a strategy to avoid confrontation,” said Romain Le Cour, co-ordinator of the security and violence reduction programme at think-tank México Evalúa. “In terms of figures, it’s apparently not working — homicide rates are not dropping.”

In addition to rising violence, the US has become increasingly concerned over the booming trade for Mexican cartels in synthetic drugs like fentanyl, which kills tens of thousands of people a year in the US.

Le Cour hopes that the dialogue will acknowledge the past failures and look for ways to build public institutions rather than just react to threats.

“There have been billions of dollars poured into the US-Mexico security co-operation, and the situation is not improving in objective terms,” he said. “On the ground, it’s a total failure honestly.”