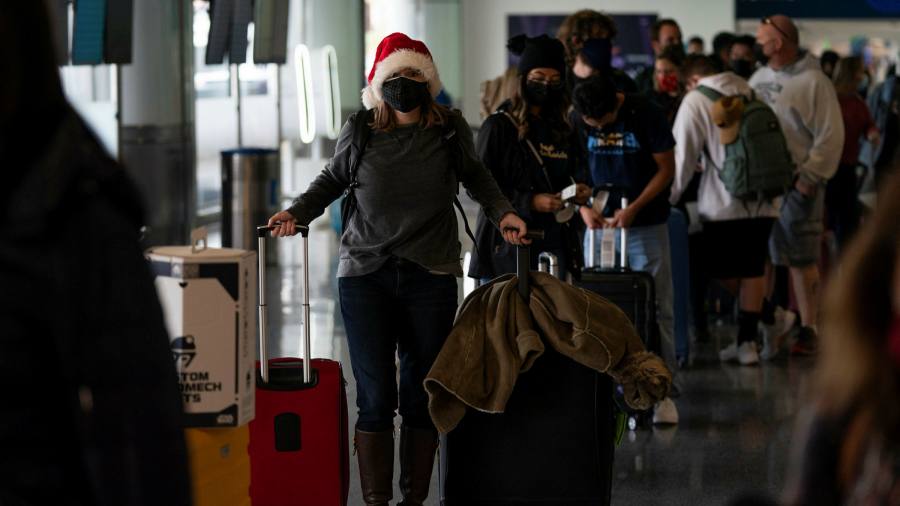 Airlines in the US and Australia have cancelled hundreds of flights on Christmas Eve, as staff shortages linked to coronavirus disrupt last-minute holiday travel.

United Airlines said it had been forced to cancel 120 flights on Friday, while about 135 flights on rival Delta Air Lines were also grounded.

The coronavirus-related disruption accounted for a small part of sprawling festive flight schedules as more than 1,900 flights were cancelled by airlines globally on Friday, mostly due to non-pandemic related issues, according to aviation tracking website FlightAware.

The United and Delta cancellations nevertheless illustrate the effect of spiking coronavirus case numbers linked to the Omicron variant.

Delta said it had “exhausted all options and resources”, including rerouting some aircraft, to try to avoid cancellations.

“The nationwide spike in Omicron cases this week has had a direct impact on our flight crews and the people who run our operation,” United said.

The disruption has come during one of the busiest travel periods of the year in the US, as passengers rush to fly home in time for Christmas.

More than 2m people passed through US airports on Wednesday, more than the number who travelled in 2019, the US Transportation Security Administration said.

There was also disruption in Australia on Christmas Eve, including 80 cancellations out of the roughly 500 domestic services at Sydney Airport.

Jetstar, a low-cost airline based in Melbourne, was forced to cancel some flights after a large number of its staff had to isolate and test for Covid-19 as part of contact tracing rules.

“We have worked to minimise any delays and have accommodated the vast majority of passengers within a few hours of their original departure time so they can get to their destination in time for Christmas,” the airline said in a statement.

UK and European airlines did not report significant disruption on Christmas Eve, although easyJet has increased its standby cabin crew and pilots across the UK and Europe as a precaution.

Rail passengers in the UK have also been warned to expect last-minute delays and alterations over the festive period, as the industry struggles with staff shortages.

Avanti West Coast, ScotRail and Southern were among the train operators warning of potential disruption on Friday.

Nearly 9 per cent of rail staff in the UK were absent due to illness or the need to self-isolate, the Rail Delivery Group said earlier this week.