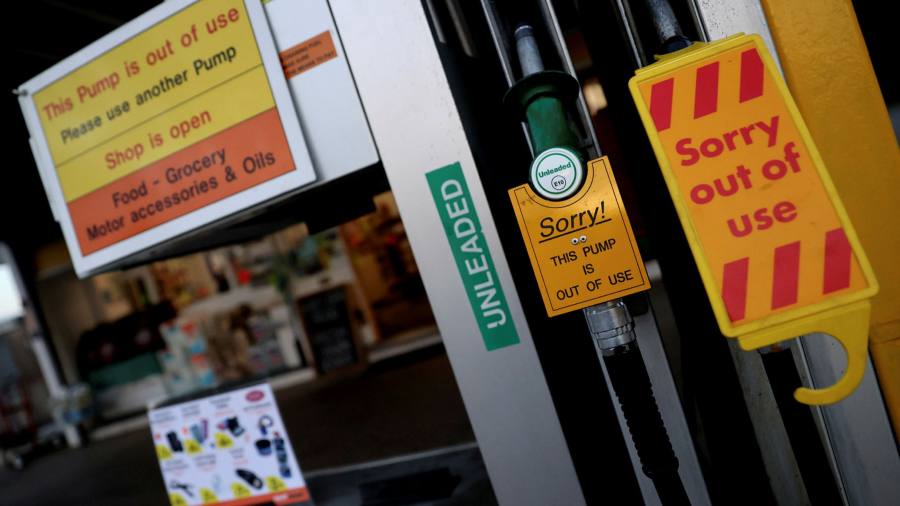 Ministers bowed to business pressure and announced a package of measures on Saturday to deal with a shortage of heavy goods vehicle drivers and food-processing workers caused partly by the Covid-19 pandemic and Brexit.

But some business leaders responded by calling on ministers to relax immigration restrictions much further to prevent chaos in the run-up to Christmas.

Ruby McGregor-Smith, president of the British Chambers of Commerce, compared the Department for Transport’s announcement to “throwing a thimble of water on a bonfire”.

She said the “low number” of visas offered to foreign HGV drivers and workers in the food industry under the government’s scheme was “insufficient”.

“Even if these short-term opportunities attract the maximum amount of people allowed under the scheme, it will not be enough to address the scale of the problem that has now developed in our supply chains,” she added.

Supermarkets alone have estimated they need at least 15,000 HGV drivers for their businesses to be able to operate at full capacity ahead of Christmas and avoid disruption or availability issues

The lack of HGV drivers in recent months, also prompted by UK workers leaving the industry, has led to gaps on supermarket shelves and warnings from retailers there could be shortages in the run-up to Christmas.

After BP last week said some of its petrol stations had closed because of a shortage of tanker drivers, there has been panic buying of fuel that has resulted in many sites running dry.

In its announcement on Saturday, the transport department said 5,000 foreign HGV drivers would qualify for temporary visas valid until December 24 to help the fuel and food industries during the current “exceptional circumstances”.

A further 5,500 visas for poultry workers will also be made available “to avoid any further potential pressures on the food industry”, added the department.

Grant Shapps, transport secretary, said: “After a very difficult 18 months, I know how important this Christmas is for all of us and that’s why we’re taking these steps at the earliest opportunity to ensure preparations remain on track.”

Other policy changes designed to ease the crisis include the training of up to 4,000 Britons as new HGV drivers.

This involves the Department for Education investing up to £10m to create “skills boot camps” to instruct up to 3,000 of the new HGV drivers.

The other 1,000 would be trained through local courses funded by the government’s adult education budget.

Almost 1m letters will be sent out to all UK drivers who hold an HGV driving license, encouraging those who have left to return to the industry.

Examiners from the Ministry of Defence will be deployed to help increase testing capacity for HGV drivers over the next 12 weeks.

The government has argued for weeks that the long-term solution to the crisis lies in training more UK-based lorry drivers, and it has previously resisted business calls for temporary visas for foreign workers.

But Boris Johnson last week ordered ministers to move swiftly to resolve the issue after panic buying of petrol took hold and amid repeated warnings from business that Christmas supplies could be disrupted.

Logistics UK, a trade body, told ministers last month that the UK had a shortage of 90,000 HGV drivers, and it welcomed the transport department’s announcement.

Elizabeth de Jong, policy director at Logistics UK, said it now wanted to work with the government to address the long-term causes of the HGV driver shortages.

Ian Wright, chief executive of the Food and Drink Federation, another trade body, also welcomed what he called the government’s “pragmatic” decision” on visas.

“This is something UK food and drink manufacturers have asked for during the past few months . . . to alleviate some of the pressure labour shortages have placed on the food supply chain,” he added.

But Labour leader Sir Keir Starmer on Sunday said the government should issue 100,000 visas for HGV drivers, rather than 5,000.

“We’re going to have to bring in more drivers . . . we knew when we exited the EU we would need a back-up plan, there is no plan from this government,” he told the BBC.

Rod McKenzie, director of policy at the Road Haulage Association, a trade body, said the offer of 5,000 visas with only 12-week validity would “barely scratch the surface” of the problems facing the logistics industry.

“So although it is good that the government has listened to RHA about the need for short-term visas, we are still very worried about the details and the short duration of them,” he said.

Andrew Opie, director of food and sustainability at the British Retail Consortium, another trade body, also said the number of additional visas for foreign HGV drivers was not enough.

“Supermarkets alone have estimated they need at least 15,000 HGV drivers for their businesses to be able to operate at full capacity ahead of Christmas and avoid disruption or availability issues,” he added.

The National Farmers Union welcomed the additional visas but called for collaboration between industry and the government on longer-term solutions to the crisis.

“We will also continue to work with government to find solutions for the wider labour needs, including trained and able butchers for pork production to deal with the increasingly serious build-up of pigs on farm and the risk of welfare issues,” said Tom Bradshaw, NFU vice-president.