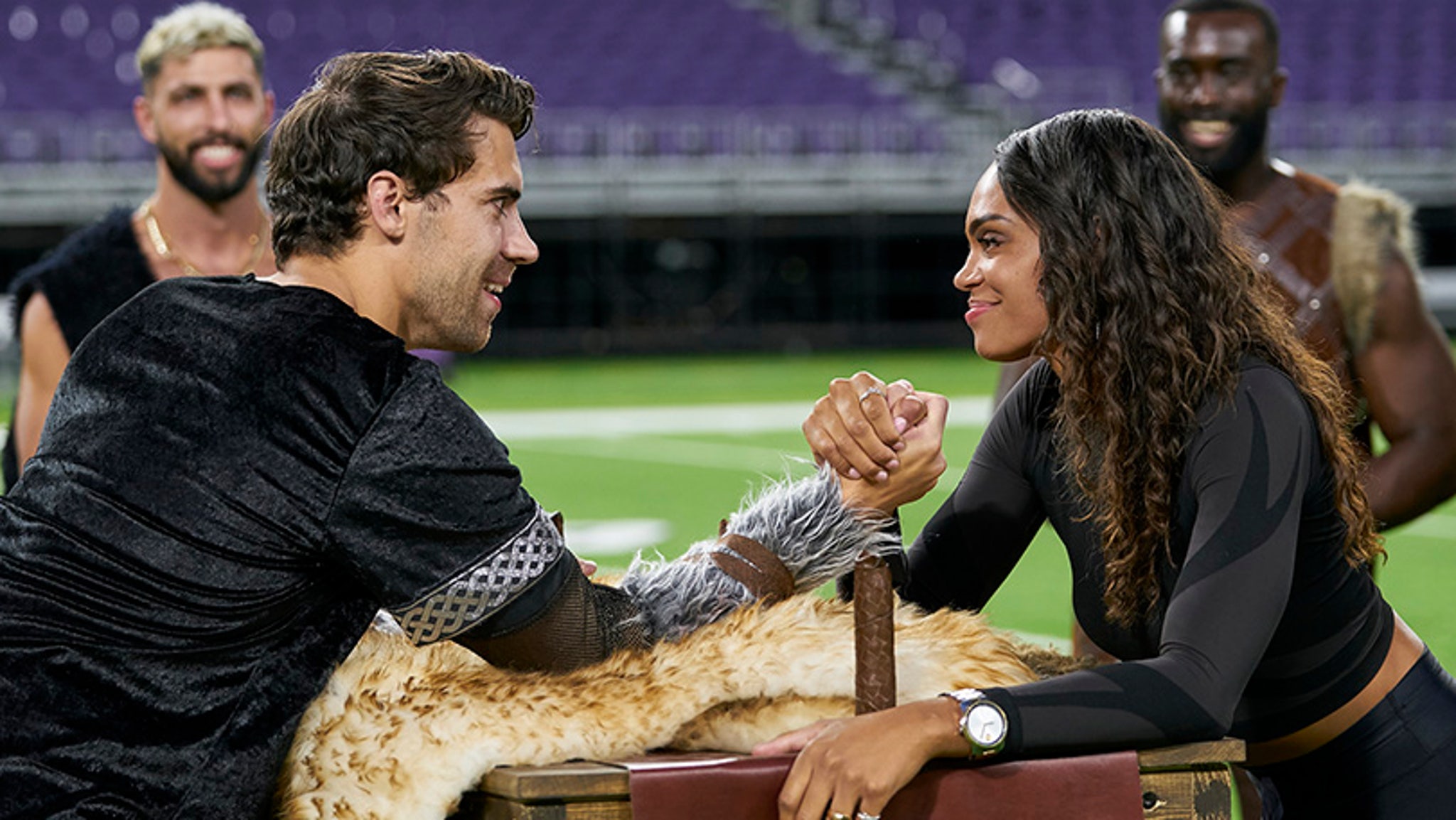 One guy crashes someone else’s One-on-One to tell Michelle she really should be listening to him more, and then another tries to explain what makes “females” “high maintenance” — Yikes!

Open mouth, insert foot. Now repeat. As much as “The Bachelorette” wants these guys to open up and reveal their true selves, maybe hold it back if your true self is hugely problematic.

This week, Michelle Young brought her remaining 11 suitors with her to Minneapolis, where they’re apparently going to spend a lot of time (the rest of the season?). She was also ready to see if they took her words to heart about being seen for the next group date.

We also got some context for that, after there was some backlash online with people interpreting it as Michelle demanding that she be the center of attention at all times. As it turns out, what’s happening is a perhaps triggering emotional response to genuine trauma.

It was a night of powerful revelations, with Michelle opening up about a serious health struggle stemming from a bad relationship, and Joe sharing when he found himself in an extremely dark place following a series of injuries.

This first week in Minneapolis featured to One-on-One dates, and a Group Date. Joe, who also hails from Minneapolis, scored the first one so that the two could connect over their shared hometown.

It was also an opportunity for Michelle to see if stoic Joe could let his walls down and maybe show some emotion or vulnerability with her. Let’s just say, he definitely did that. And in doing so, he opened the door on a world that’s often not really talked about.

Athletes are known for being hard and tough, as it’s kind of trained into them to be that way. But it doesn’t leave a lot of room for them to be emotional. It also can become their entire lives, which often is precariously balanced on a beam.

If you make something your whole identity, it can leave you in a pretty fragile place as a human. Check in on any elite athlete who suffers a career-ending injury, and it leaves them feeling empty.

That’s what Joe opened up about, after a serious injury and a botched surgery (followed by a more intensive surgery) left him feeling out of sorts as a basketball player. And since that was his whole life, he basically suffered a full-on identity crisis that spiraled into depression and suicidal thoughts.

This is the side of athletics that isn’t talked about, that all-in attitude is great when things are firing on all cylinders, but it doesn’t leave room for an identity outside of the sport to develop so that the person is ready to live outside of the sport, either through injury, aging out or even just choice.

We also can’t overstate how cool it was that she and Joe (earlier in the date) got to go to the baseball stadium where Michelle threw out a pretty respectable first pitch before a Twins game. Talk about a power move on the first date!

For the Group Date, she shifted over to football, inviting the boys to the stadium, but not to see the Vikings they were expecting. Instead, it was three guys who basically bellow and scream in Viking cosplay.

The boys were challenged to take on some challenging dishes, to modern Western palettes for sure, that are apparently traditional Viking dishes, like pickled herring. Chris S, who last week told Michelle that Nayte thought he had it in the bag, was not down for any of it.

We’re not at all sure why all the guys got to dress up like Vikings, and Chris S had to wear a cheap Halloween costume like he was a centaur. Olu later said there was a reason he was dressed like a donkey (use your imagination, kids!), but we want to know why producers did it? Was it because they already knew he was a little fired up?

Later, during the evening portion of it, we saw guys one by one interrupting each other for time with Michelle. Meanwhile, Chris S was off drinking by the bar and talking to the guys about how he needed to talk to her, but he clearly thought she was supposed to come find him.

You’d think it was his first time on this show. That’s never how this works. He even pouted about it later, though there was a certain irony to it. Michelle lamented that she didn’t feel seen, and Chris S felt that as he was clearly sullen and not himself, Michelle should have seen him and checked in on him.

Well, she didn’t. Instead, she talked to everyone else and had a wonderful time — probably because she didn’t talk to him — ultimately giving the Group Date Rose to Clayton, who talked about his family and openly admired her confidence as a person (something he’s still working on).

Honestly, it looked like a lot of the guys were having real meaningful conversations, which are so important at this stage of the game with the numbers dwindling week by week, but Chris S didn’t. At least, he didn’t that night.

Why It Took Kieran Culkin 7 Weeks to Name His Newborn

Nayte on the Lake

The other One-on-One date was scored by Nayte, coming just after Chris S had warned her that he was too confident and really phoning it in. In confessionals, though, to Nayte’s credit he says that he heard Michelle calling him out on not putting in the effort on the last group date and was determined to do so.

If he’s being sincere, he seems to have gotten the message loud and clear. And to his credit, when challenged by two of Michelle’s friends, who joined him on the date, he owned up to what he said and the fallout of that conversation.

Honesty is almost always the best choice, and certainly owning your stuff is admirable as it shows self-awareness and humility. And it was in owning his own failure to give Michele those “small moments” that she wanted that he got her to open up.

This isn’t just a matter of Michelle being needy, but rather a reaction to a three-year relationship that was so toxic, it made her physically ill in a way doctors couldn’t diagnose. She said she got to where she couldn’t hold food down and they were considering feeding tubes just to get nutrition into her.

It was at this point that her boyfriend decided it was all too much for him and bailed. And that was how she learned that her physical ailments were all a response to the deep levels of anxiety and torment she’d felt in that relationship where she never felt important or seen.

Unfortunately, within moments of this conversation, she began to perhaps feel more seen than she wanted when suddenly Chris S showed up, crashing her One-on-One. You gotta love the producers who drove him to where the date was so they could have this drama.

Chris S pulled her aside to tell her that he basically felt bamboozled, cheated, betrayed by her choosing Nayte for a One-on-One right after he’d told her that Nayte is bad dude numero uno. Did his words fall on deaf ears? Did he not hear what she said!

Well, that’s the problem. She’s more than capable of taking in information, making her own decisions and speaking for herself. He talked over her at a previous Cocktail Party, and now he’s crashing a date to take up more of her time. So she corrected the clear error she made last week and escorted him out (dude was totally flummoxed).

First of all, be careful when you start lumping women together, and especially if you’re going to call them “females.” If we were stunned that Chris S got a rose last week, we were even more surprised that Martin survived his own foot-in-mouth moment.

We feel confident that he was coming from a place of good intention, but it was also a place of what appeared to be deeply rooted prejudices and stereotypes about women. It’s not blatant sexism, but certainly tinged with passive sexism.

It started when he told her during the Cocktail Party that he was glad she wasn’t high maintenance, because, you know, all the ladies in Miami are. Well, Michelle’s radar went up and she challenged him to define a high maintenance woman.

His definition was a woman who expects a man to do everything for her. At first, she didn’t think that was an answer to her question, but we think it was — maybe not one she liked, but it was. Then, she asked how it differed from a high maintenance man.

It was at this point that Martin started swallowing his shoe, saying that men aren’t out here looking for a woman to take care of them and do everything for them. My man, have you seen how many men are out here looking for a mom to pay their bills (if not financially, do the work), cook their meals, do their laundry, clean their house, raise their kids?

Martin will be a cautionary tale about how talking too much can get you in trouble#Bachelorette #BacheloretteABC pic.twitter.com/IQzw0OdyQT

Martin: men don’t expect females to take care of them

Michelle’s face spoke volumes, so we were stunned that Martin actually got a rose. Maybe she marinated over what he said fully and understood it wasn’t coming from a genuinely misogynistic place. He said plainly that he didn’t think men or women should be like that in a relationship.

Instead, Michelle made the easiest trim of the season, cutting the only two guys who’d yet to receive either a Group or One-on-One rose from her. That meant following Chris S out the door were Leroy and Dax Shepard lookalike Casey.

From here, though, things are only going to get tougher. These are the eight guys she has created a strong enough connection with to award a rose on one date or another. These are the relationships that matter. In the end, there can be only one! Will it be the right one?

“The Bachelorette” continues Tuesdays at 8 p.m. ET on ABC.