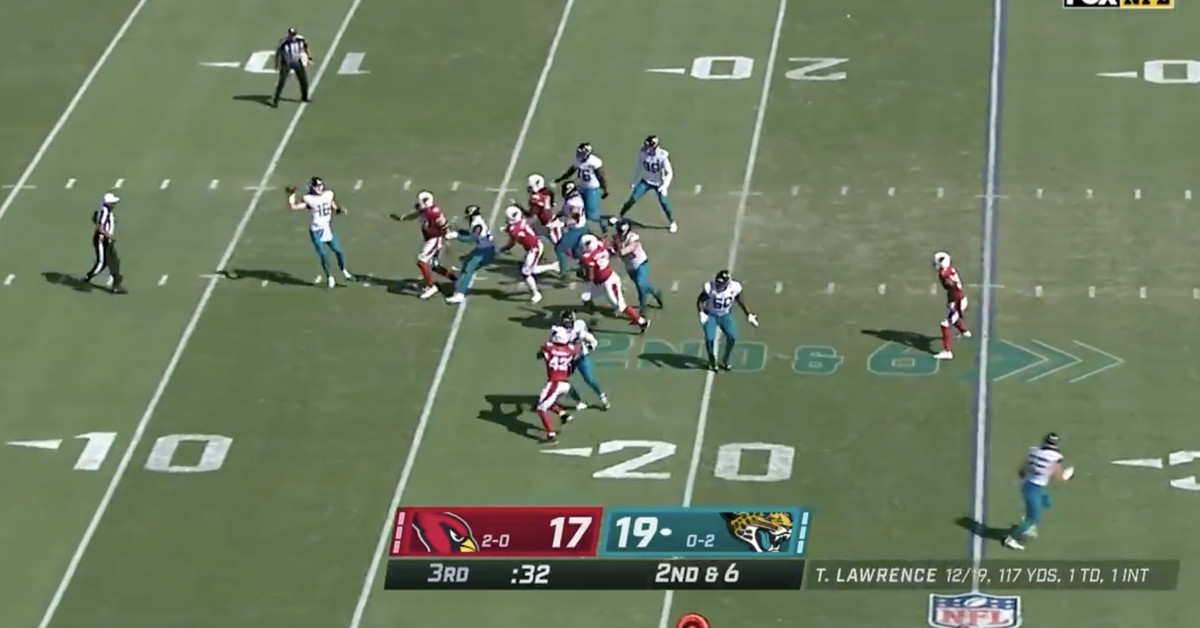 Trevor Lawrence has had several “welcome to the NFL” moments during the start of his rookie season with the Jacksonville Jaguars. The No. 1 overall pick is finding out that life with a Jags team that remains one of the very worst in the NFL is quite a bit more challenging than what he experienced at Clemson.

The Jaguars faced the undefeated Arizona Cardinals on Sunday, and for a moment it felt like Lawrence finally got the good luck he needed to secure his first NFL win. The Jags scored a ridiculous 109-yard touchdown on a missed field goal by Arizona to take the lead at the halftime buzzer. Jacksonville held onto the lead late into the third quarter until it all fell apart.

With under a minute remaining the third and holding a two-point lead, Jacksonville went for a flea flicker. Lawrence got the ball back from his running back and heaved it downfield to avoid the oncoming pass rush. It landed the hands of Cardinals defensive back Byron Murphy, who took it back to the house for a touchdown.

You can watch the play here:

The Jags never led again, and eventually fell to the Cardinals, 31-19. Jacksonville is 0-3 in the Urban Meyer and Trevor Lawrence era.

This is an ugly play for Lawrence to be sure. He’s now throw multiple interceptions in all three games he’s started in the NFL. The good news for Lawrence is that Peyton Manning and Troy Aikman each threw multiple picks in their first three NFL games, too. Jacksonville fans can be encouraged that Lawrence continues to throw downfield, and keeps testing the limits of what he can get away with in the NFL.

Lawrence was considered one of the strongest quarterback prospects in the recent history of the NFL Draft, but it was always too much to expect him to turnaround the franchise in year one. So far, the Jags’ decision to hire Meyer looks like a disaster, and it’s clear the rest of the team needs to be built up to put Lawrence in a position to succeed.

There will be better days ahead of Lawrence because he’s too talented for there not to be, but the start of his rookie season has been a sobering reminder that even elite QB prospects take time to develop, especially when they are on terrible teams. For as rough as Lawrence has looked, fellow rookies Justin Fields and Zach Wilson didn’t look any better in Week 3 during their starts.

Lawrence ended the game 22-of-34 for 219 yards, one touchdown, two interceptions, and two fumbles lost. It can only go up from here.