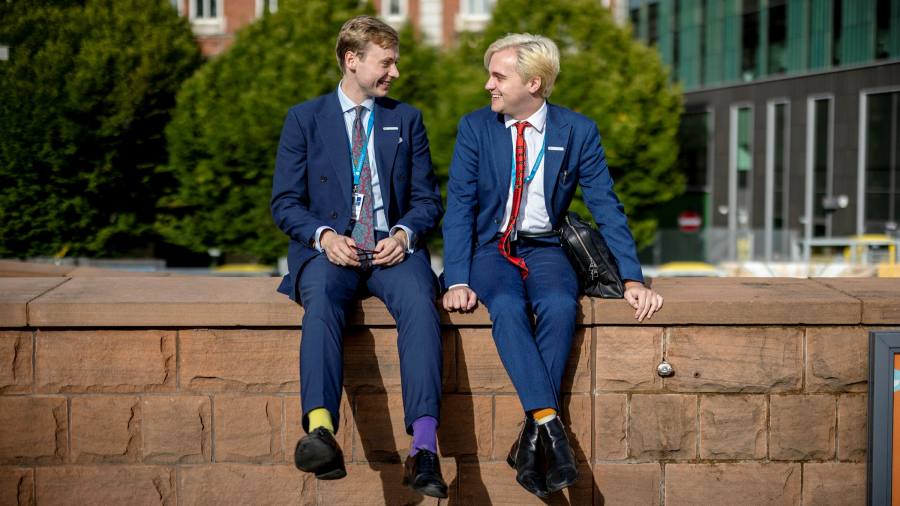 Few places on Earth are less Covid-secure than the bear pit of Manchester’s marbled Midland Hotel bar at 2am. After three days of immersing themselves in rightwing politics, Conservative activists lost all semblance of pandemic protocols. The gin and tonics sloshed around in vast goblets as bearhugs were exchanged. Sweat oozed from every orifice.

Yet one thing did not yield among the Tory faithful this week: the ties were never lowered from the top buttons. The marked change in these Conservative jamborees over the past decade is the merging of activists and corporates, so it is now impossible to discern who is there for fun or work (only the crumpled journalists mark out their purpose on first glance). As the party left behind the “blue-rinse brigade” of kindly ladies from England’s Home Counties, the dress code has become homogenous.

From arms dealers to activists, the uniform is business and certainly not casual. That is particularly true for the young men — the Tory conference is still overwhelmingly male — who were a sea of trim suits, mostly blue, with shirts, ties and cufflinks. Waistcoats and bow ties denoted the especially enthusiastic ones. Britain may have relaxed into athleisure over the past 18 months, but the Tory party has gone in the opposite direction.

The typical outfit was captured in a Twitter meme of three activists who appeared to be variants of the same person. All had ruffled blond hair, seemingly inspired by the prime minister, encased in well-appointed suits and clutching empty glasses. They were ready for a big night touring the fringe sessions to debate the optimal tax point on the Laffer curve.

The outside world may ponder: “Why on Earth are these young men dressed like that?” Inside the venue, it was a sign they were “one of us”, in the words of Margaret Thatcher, and up for the time of their lives. Their patriotism is displayed proudly: Union Jacks festoon ties, socks and cardigans. But are they trying to ape their political heroes — more Rishi Sunak than Boris Johnson, based on their cut — or is it an aspiration towards a grander life? Or is it a symbol of freedom and self-expression?

For Christian Calgie, a reporter with the Guido Fawkes blog and a former Tory activist, his conference confusingly began when the man in front of him was blocked by security for taking a cigar cutter through the detectors. He mused that these young men reflect the changing nature of the party. “Most of those I meet at conference have fairly ordinary backgrounds twinned with a fierce social and political aspiration. In this vein, a smart, simple, business-oriented suit is the ideal conference garb for young male Tories.”

Calgie added that this uniform handily fits with the late-night socialising requirements. “Given the repeated hangovers at party conferences, it also helps not having to think too much in the morning about your choice of clothing, bar checking your shirt choice hasn’t sustained red wine damage the night before.” Red trousers and brown Hush Puppies, as often seen in the 1990s, were noticeably lacking.

Smart dress is not wholly confined to Tory conferences. At this year’s Labour gathering in Brighton, the number of suits had dramatically increased from the Jeremy Corbyn years, when T-shirts, beards and Converse were the most typical outfit. But with Sir Keir Starmer’s arrival to the party leadership, the dark grey suits and skinny red ties of the New Labour era have returned. The emasculated leftwingers stand out not only for their policy differences.

While the 2021 Tory conference was significantly smaller than usual, the number of women had shrunk noticeably. Yet those who were present made it known through bright outfits with some serious blow-dry action. Liz Truss, the new foreign secretary, leaned into an updated version of Margaret Thatcher’s voracious look. One of her aides privately confessed to me they were experimenting with a number of darker and more serious dress hues to level up to her exalted position.

Dehenna Davison, the first Tory MP for Bishop Auckland, had similarly bouffant hair, teamed with bright pink or orange trouser suits and a “Tory Scum” badge. Anne-Marie Trevelyan, who re-entered the Cabinet as trade secretary last month, found a serious dark blue jacket for the main stage, before swapping into sky-blue attire to mill among the activists. Another day, she was spotted with knee-high bright red boots.

Yet some Tories bucked the buttoned-up trend. The night before conference began, Cameron Brown, an aide to the business secretary Kwasi Kwarteng, was holding court in the Midland bar in a sockless outfit that one observer said “would put Harry Styles to shame”. Brown, who formerly worked for the Tees Valley mayor Ben Houchen, always wears casual garb whether in Westminster or Teesside. Or, as one fellow journalist summed it up, he is “sartorial Houchenism”.

Political conferences naturally attract curios, including those who don the same outfits each year. There’s the one transported from the 1950s, complete with green velvet suit and wide open shirt. And the tall man dressed in a long purple coat, straight out of a minor 1980s marketing agency. And no one can forget the fellow dressed up as Sir Winston Churchill, who attempted to do an impersonation for the TV crews through his broad West Midlands accent. Even if the businessmen were not fully enjoying themselves, these oddities certainly did.

The image that sums up the aesthetic of this year’s conference was of a young Tory at Boris Johnson’s rally, outfitted in a perfect uniform of blue lightly checked suit, flowered tie, pocket square, well-coiffed hair and smart glasses. He was eager for the prime minister’s keynote moment, with a “Build Back Better” sign hoisted above his head upside down. Was he a normal Tory? Or a party apparatchik? Or a confused lobbyist? At a conference where everyone looks and acts the same, it scarcely matters.