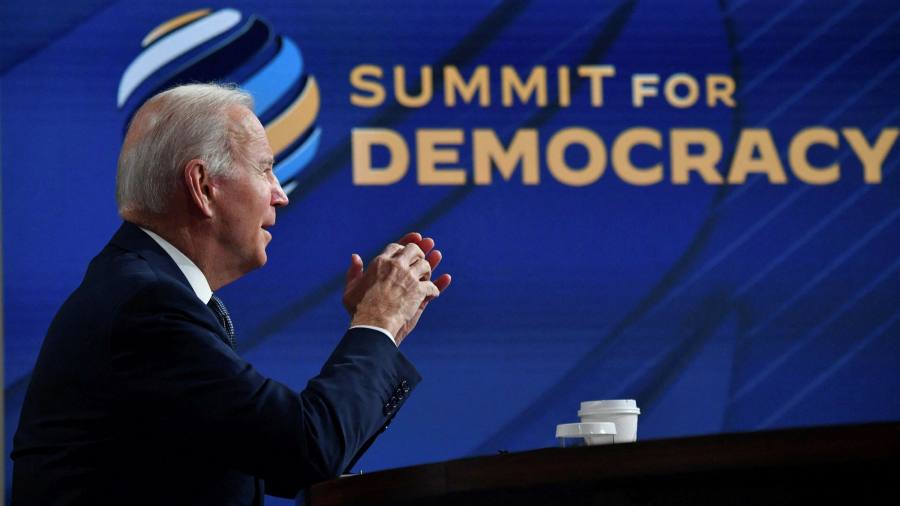 The writer is an FT contributing editor and author of ‘Renewal: From Crisis to Transformation in Our Lives, Work, and Politics’

At President Joe Biden’s democracy summit last week, the US ambassador to the UN, Linda Thomas-Greenfield, reflected on Ralph Bunche, “an African-American diplomat, civil rights activist, and above all, a fighter for freedom”.

She told the story of a commencement address that Bunche gave at Kentucky State College, a historically Black university, in 1950, in which he sought to answer the question: How can we defend democracy and expand it to all peoples? “Underlying that question,” she said, “was a clear conundrum: how could we defend and spread democracy and freedom to the world when black Americans were not experiencing it at home?”

For decades after the second world war, as the international human rights movement gathered steam, American lawyers and politicians drew a sharp distinction between human rights abroad and civil rights at home. When I was a student and faculty member at Harvard Law School in the 1980s and 1990s, the struggle of African Americans for equal rights was taught in constitutional law classes; the torture and oppression of Chileans, Cambodians, Chinese and so many others was taught to a much smaller group of students studying international law. As recently as 2007, the historian Kevin Gaines wrote that the American civil rights movement “remains a nation-based account of the response of presidential administrations to southern racial upheavals”.

That is changing, albeit slowly. Historians have brought to light the many ways in which the leaders of the civil rights movement identified with struggles against colonial powers in many other nations, far beyond Martin Luther King Jr’s well-known adoption of Mahatma Gandhi’s techniques of non-violent protest. In her book Caste, Isabel Wilkerson has directly linked the experience of African Americans to that of Indians — not simply at the hands of the British but in their own society. In A Colony in a Nation, Chris Hayes argues that black Americans are a colony of the unfree within “the land of the free”.

As African Americans have gradually and haltingly joined the ranks of the powerful in the US, all the way up to the presidency, they have connected human rights and democracy at home to their worldwide equivalents.

As secretary of state, Condoleezza Rice made the case for democracy in the Middle East by invoking the segregated world in which she grew up in the American South. In a speech at the University of Alabama in 2005, she proclaimed: “Across the empire of Jim Crow, from upper Dixie to the lower Delta, the descendants of slaves shamed our nation with the power of righteousness, and redeemed America at last from its original sin of slavery.” As a result, she added, the US could rightfully champion democracy beyond its shores.

Many others are less certain that sin has been fully redeemed. After decades of reviewing the human rights practices of other countries, the US state department under President Barack Obama undertook for the first time ever to report on the state of human rights inside the US. The National Law Center on Homelessness and Poverty now talks about the “domestic human rights movement” as it advises other organisations to invoke international human rights standards in domestic advocacy.

This daily work of holding our own governments to account lies at the core of how Bunche and Thomas-Greenfield, an African American who grew up in Louisiana, think about democracy. Bunche told the Kentucky State graduates that democratic progress was slow and hard-fought: the result of peaceful protest, standing up for rights, elections, a free press reporting on injustices, institutional accountability and the rule of law. Ultimately, he said, “the greatest defence for democracy is its practice”. Thomas-Greenfield built on that: “All democracies are inherently flawed. We are imperfect. But the way we improve is practising democracy.”

What a refreshing antidote to traditional American exceptionalism. If the US is exceptional, it must be in recognising and redressing its ubiquitous imperfection. At their best, democratic nations engage in a constant dance between honest acknowledgment of flaws and failures and ambitious self-improvement.

That recognition should lie at the core of any American effort to champion and support democracy in the wider world. The Biden administration should consider making evidence of honest engagement with the darker sides of any nation’s history one of the criteria for invitation to next year’s summit. It is certainly a critical marker for the US’s own democratic progress.