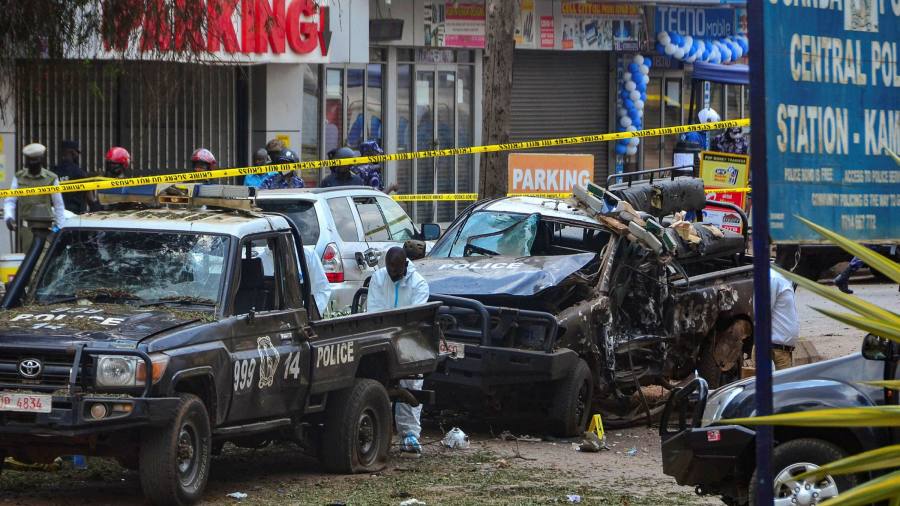 At least three people were killed in twin blasts that rocked central Kampala on Tuesday in what Ugandan police described as co-ordinated attacks by a “radicalised” group believed to be linked to jihadi Isis.

More than 30 people have been injured, including five people in critical condition, according to police spokesman Fred Enanga, who added that three alleged suicide bombers also died in the blasts.

The twin explosions, one near a police station and another close to the parliament building, happened within minutes of each other, while an attack on a third target was foiled by the police.

Ugandan police blamed the blasts on groups tied to the Allied Democratic Forces, or ADF, an Islamic extremist group that operates from the Democratic Republic of Congo, originated in Uganda and opposes longstanding president Yoweri Museveni.

Late on Tuesday Museveni called the attackers “pigs” and said they were part of the “ADF group that attacked” a Ugandan government minister, General Katumba Wamala, in an attempted assassination in June, wounding him and killing his daughter and driver.

“They have exposed themselves when we are more ready for urban terrorism. They will perish,” Museveni said.

The threat posed by Isis-linked groups is on the rise across parts of east and central Africa, analysts warn. In northern Mozambique a group known to locals as Shabaab has loose ties with Isis and has over the past four years terrorised the northern province of Cabo Delgado.

“With today’s attacks in Kampala we are starting to see signs of the development of a regional financial, recruitment and explosive device proliferation network connected to Isis-affiliated individuals who are operating in both the ADF camps in eastern Congo and among northern militants in Mozambique,” said Dino Mahtani, deputy director of Africa at Crisis Group. “What has happened in Kampala is going to be just one dimension of an overall regional terror threat that is emerging.”

“In years gone by the ADF’s leadership was pulled mainly from those who had the agenda of overturning the Ugandan state. In more recent years its main faction has sworn allegiance to Isis,” said Mahtani.

On Tuesday, eyewitnesses described body parts scattered in the street and people evacuating the parliamentary building, as many rushed to leave the city. “We are seeing a lot of bodies shattered. Legs have been scattered and there’s a skull which we believe are for the suicide bomber,” Enanga added.

Tuesday’s attacks follows a string of explosions in October. One person was killed and at least seven others wounded in an explosion at a pork restaurant in a suburb of Kampala, and two days later a blast on a passenger bus killed only a suicide bomber. ADF claimed responsibility for the attack on the eatery.

The most lethal attack in Uganda’s recent history was staged during the 2010 football World Cup, when the Somali Islamist group al-Shabaab — unrelated to the one in Mozambique and mainly linked to al-Qaeda — bombed several bars in Kampala, killing over 70 people. Uganda is a major supplier of troops to Somalia to fight al-Shabaab.