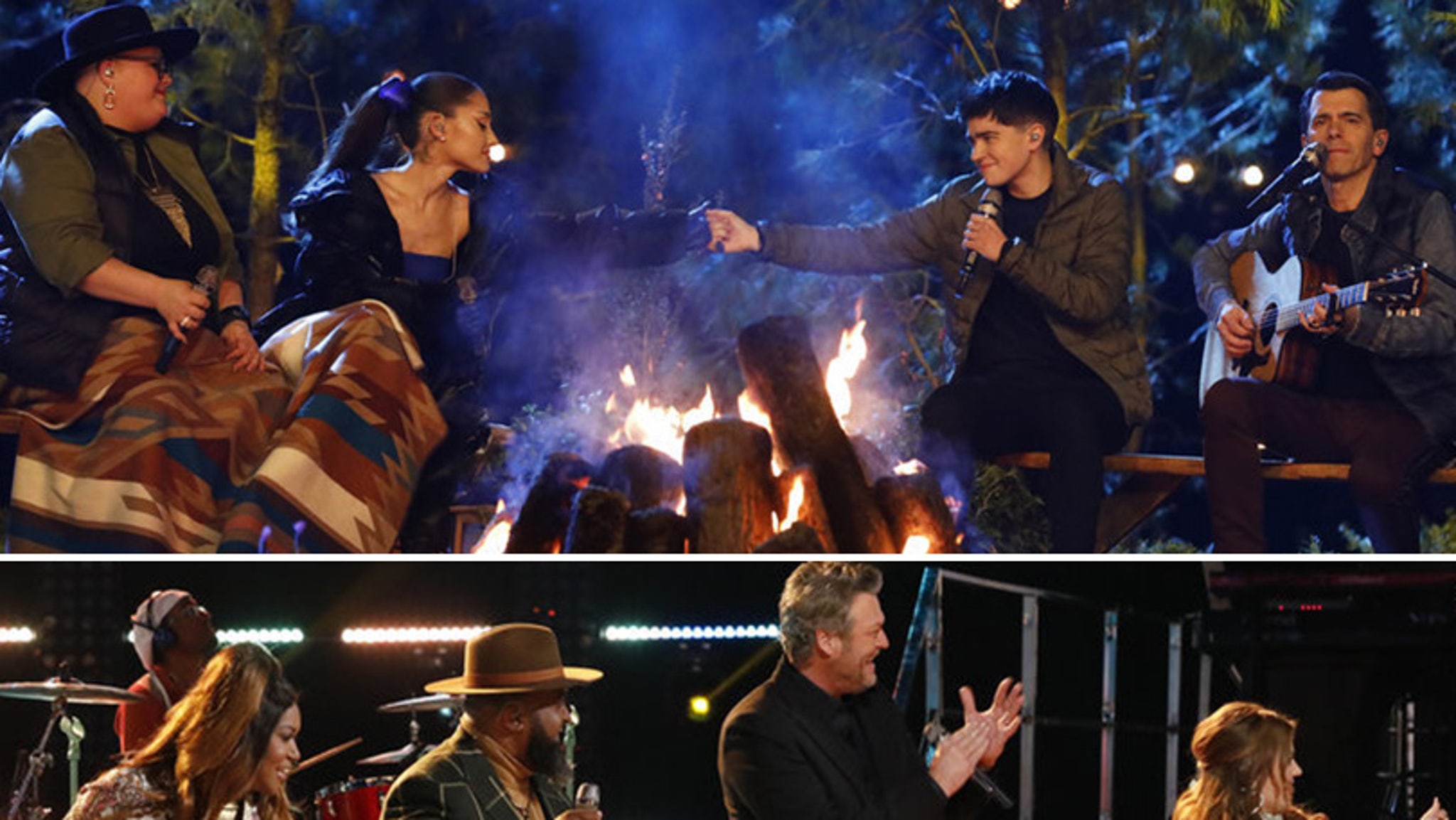 The entire show comes to a halt as one contestant takes a bad fall on stage and Carson Daly anxiously awaits word on how they are.

The entire show stopped as they were not quickly back to their feet, prompting a rush to the stage for assistance, a long silence and then an agonizing wait all the way through the next commercial break to see how they were doing.

And all of this before we found out which of the Top 11 was eliminated. If you’ve followed our coverage this week, we talked about how worried we were with such a tight night of competition on Monday that we could be in for a shock result.

We could be and we were! Only two artists fell into the Instant-Save this week, and both of them were a bit of a shock — but the act that went home was definitely among the best of the night on Monday, and all season long!

And just for fun, I’m going to rank the performances from worst to first for the Insta-Save to see who my favorite was, and then see how close you were to getting it right with your votes (i.e., agreeing with me).

(“FourFiveSeconds,” Rihanna f. Kanye West & Paul McCartney) The contestants voted out last week might feel a little cheated they didn’t get to perform with Ariana this week, but we actually really appreciated the stripped down performance featuring two male and two female vocalists. There was a very nice symmetry in the harmonies that carried through, with Ariana and Holly sitting on one log and Jim & Sasha on the other, creating a campfire singalong vibe. The whole experience was very pleasant, with everyone sounding in fine voice, but no one really stepping too far outside the melody to try and have an individual moment at the expense of the whole.

Blake and Ariana have forged one of the cuter relationships on the show, highlighted by their cheers every time Kelly talks about “navigating” anything. Both are genuinely funny people in their own right, too, which played very well to this pre-taped bit about them deciding to drive in to work together. All of Ariana’s nitpicking at Blake’s driving, his truck, his autographed pictures, was pretty funny, particularly how dramatically she played it when she declared she had a headache.

(“Can’t Help Myself (Sugar Pie, Honey Bunch),” The Four Tops) Team Blake had an opportunity to create something really unique in this moment. After all, they had two R&B singers (one male, one female) on the one side and two country singers (one female, one male) on the other. There are so many duets out there where this could have been very cool to hear, but instead we got an old-school Motown track that didn’t sit well on Lana’s voice at all. Blake was a little more solid in it, but still not great.

In a scary moment after the number ended, it looked like Wendy took a hard fall over a monitor on the ground in front of the band’s setup and was slow getting up. Blake rushed to help her, alongside some stagehands, make her way slowly off the stage. Carson could only hope that she was doing okay as he awaited word, but had to carry on with the show.

Thankfully, after the next commercial break, we returned to see Wendy next to Carson assuring everyone that she’s just fine. At the end of the night, though, Wendy was not a part of the promotional picture Blake took with his remaining team members, though hopefully that’s just a matter of her perhaps getting check out medically at the time to be sure she’s okay.

The best night of competition for the whole season was a real treat for fans, but created a heightened sense of tension for these results.

Yes, only one person would be going home at the end of the night, but when the entire competition is neck-and-neck in talent and commitment, that also means everyone is in danger of being that one. After all, there were no easy choices to go home. Everyone was electrifying.

As a reminder, we’ll share our rankings of all Top 11 acts from the performance show below:

What we predicted for an actual Bottom 3 were Jeremy, Wendy and Holly, as we suspect Jim & Sasha’s fanbase is larger than what they delivered Monday night. For the same reason, we didn’t think Jeremy was in any real danger of going, despite ranking dead last for us. Instead, we were worried for Holly.

Right away, it was good news for Joshua Vacanti and another easy week for Hailey Mia, who avoids the Instant Save for the second week in a row. The next pair to safety were Paris Winningham and Holly Forbes, so clearly our thought that she might be in danger was unfounded.

Would America then line up with our rankings? Apparently not, as Wendy Moten was the next declared safe. Now, she’s arguably the best singer in the competition, we just felt she had a somewhat boring night on Monday. But even the song was America’s choice, so they were clearly into it.

Girl Named Tom was an obvious choice into safety as they have a huge fanbase right now on the show, followed by Lana Scott, who finally showed who she could be on the current country charts.

As we anticipated, the fan support for Jeremy’s story was enough to carry him into safety, which suddenly had us worried about Jershika and Gymani. We still were feeling confident that Jim & Sasha had the fan support to carry through. But what if they didn’t?

The last artist guaranteed into safety was last week’s top performer, Jershika Maple. While she wasn’t the strongest this week, she definitely earned the chance to continue. But that meant it was the danger zone for both Gymani and Jim & Sasha Allen.

We worried that the coffeehouse take on a rock classic left JIm & Sasha vulnerable, but we had Gymani our second-favorite act of the night. We’ve also suspected that the father-son duo has a strong following, but that may not be the case.

Coming into the night, Team Kelly dominated in total numbers, not just because she has a trio but because she had four artists left. Meanwhile, Team Ariana was down to two, making this a pretty pivotal Instant-Save vote. After this moment, either Ariana will be down to just one artist, with Kelly remaining dominant, or there’s a little more parity with total acts per Coach.

It’s also important to note that Gymani was in this exact same position last week, having to fight for America’s vote. That had to be hard on her confidence and her nerves. It worked last week, but would America save her again? We weren’t so sure, considering who she was up against.

(“I Won’t Give Up,” Jason Mraz – 57/19, Newtown, CT) Sasha slipped in a “trans rights” statement at the end of this performance, but before that we heard way may have been the weakest harmonies from the duo all season. In particular, Sasha sounded a bit off-key during the opening lines of the song. He finally got into gear with the chorus, but it seemed pretty clear that being here shook his confidence a bit. It was nice to see Jim without the crutch of an instrument, as it allowed the pair to really just be in the moment together, interacting and loving what may be their last time together on this stage.

(“Tell Me Something Good,” Rufus & Chaka Khan – 23, East Point, GA) Gymani struggled a bit in the opening bars, at one point even sounding as if she lost her place or lost the words. Once we finally made our way into the chorus, she got into what she does. That scratch in her voice is so compelling, we could listen to her scat up and down her range for hours, which is good because that’s what a lot of this was. It was high-energy and a lot of fun.

Based on the performances we just saw, we’d have to say that Gymani won this battle. She’s also been a consistently strong presence on the show all season, while Jim & Sasha have been mostly great, but with a few off nights (like this one) along the way.

While it could be argued that Gymani’s sound and style is already represented on the show by other artists, and that would be fair, one could also argue that Girl Named Tom is in a similar lane as Jim & Sasha, only with a little more vocal consistency in their performances. Sasha has been so dynamic in the past, but this wasn’t it.

Still, as we noted before, Gymani has been here before and it’s not uncommon for America to reject the idea of saving someone two weeks in a row. If they can’t get enough support to rebound and just make it through, as Hailey Mia has done, then why take the time to save them if you’re just going to have to probably do it all over again next week?

Based on audience reaction alone, we’d say that Jim & Sasha probably had this one. But it’s not the studio audience voting, so would America get in line and echo the sentiment we saw on television?

That’s exactly what they did. While we may never fully know the reasons, Gymani was not given a second chance at America’s Save as it was Jim & Sasha Allen who scored enough votes to stay alive in the competition.

Let this be a cautionary tale for them and everyone, though. You’d better follow up a near-miss like this with the best performance of your career because you can’t count on America to save you more than once!

“The Voice” continues Mondays and Tuesdays at 8 p.m. ET on NBC.