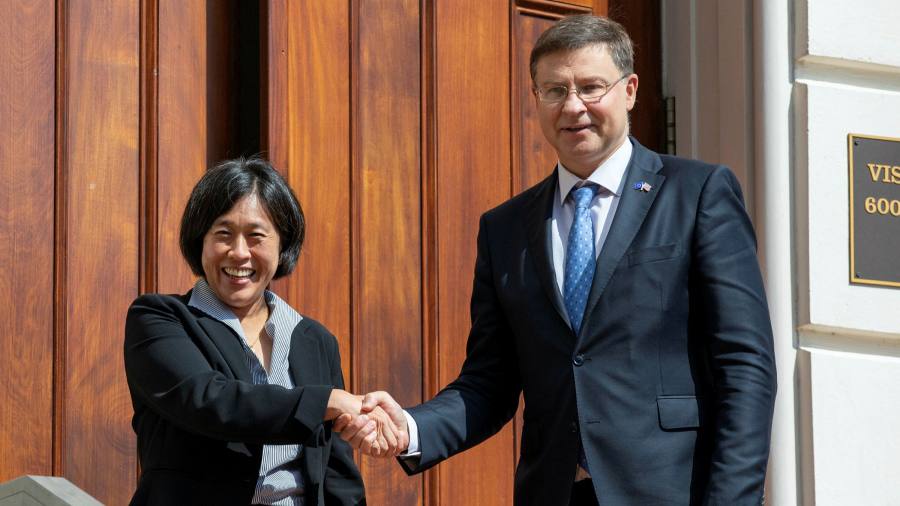 This article is an on-site version of our Trade Secrets newsletter. Sign up here to get the newsletter sent straight to your inbox every Monday to Thursday

Hello from Pittsburgh, where your intrepid reporter has bravely trekked (well, caught a plane) to bring you all the latest news from the inaugural trade and technology summit being held by top US and EU officials.

I’m pleased to report that the early evening flight out of DC had seemingly half the staff of the US Trade Representative’s office (USTR) and commerce department on it, along with commerce secretary Gina Raimondo and US trade chief Katherine Tai. The EU delegation, including EU trade chief Valdis Dombrovskis, was also in full force — all of which had the slightly comical effect of making our jaunt to Pittsburgh seem a bit redundant, given the relevant characters were all in situ in DC. Perhaps it’s part of the Biden administration’s effort to make the rustbelt feel part of the beating heart trade policy. Whatever the reason, it’s lovely to be in Pittsburgh and good to leave one heaving metropolis for another from time to time. I’ll certainly be trying very hard to see some of the sights of this great Pennsylvanian city.

Our note today takes in a little bit of the summit, which at the time of writing has yet to start, but is mainly focused on steel (speaking of Pittsburgh) and aluminium, the subjects of an outstanding bit of Trump-era trade beef between the two sides.

Charted waters, meanwhile, looks at the rise in price for the humble pea.

We want to hear from you. Send any thoughts to trade.secrets@ft.com or email me at aime.williams@ft.com

Is Europe heading down the quota route?

So here we are in Pittsburgh (can you tell I’m excited to leave DC?) for the inaugural trade and technology council to be held between the US and EU. For a moment, it looked as if the French might derail it. We’ve written quite a bit about the TTC (as it’s called) already, and we expect any joint statements made today to be, based on drafts seen by Trade Secrets, quite dull.

As my Brussels-based colleague Alan Beattie has pointed out, some of the most pressing items on the agenda are really going to be better dealt with at a member state level (see his note on the state of play on export controls here). The US knows this, although it hasn’t stopped Raimondo telling us that she hopes to make progress on the issue this week (“it’s a big priority”). There will of course be some more commitments to “tackling non-market economies” and all of that jazz, and European diplomats insist that the meeting is still a good thing because it creates a new forum in which to chat going forward.

Still, there’s an item that is not on the agenda which is actually really quite pressing — Trump-era US tariffs on European steel and aluminium. Back in 2018, Trump imposed hefty duties on imports of steel and aluminium from Europe and other countries based controversially on national security grounds (so-called Section 232 tariffs), and while a solution has been reached with Canada and Mexico, there isn’t one with Europe.

In May, the two sides reached a detente when Europe agreed to delay the ratcheting up of its retaliatory tariffs on clothing, bourbon, and motorcycles until December 1. But the clock is ticking. Visiting Washington on Tuesday, EU trade chief Valdis Dombrovskis said that Brussels actually needs to decide what it’s doing — whether it’s putting those tariffs back on or not — closer to early November, meaning an agreement effectively needs to be reached in little over a month. Dombrovskis was set to have some serious meetings on the tariffs with both Raimondo (the Section 232 tariffs fall under the jurisdiction of commerce) and Tai before leaving for Pittsburgh.

So what’s the way forward? Various ideas have been floated by learned trade watchers, including beefed up monitoring mechanisms to stop trans-shipment (whereby steel from countries known to be overproducing dodges tariffs by being processed via a third country) and quotas, with a tariff triggered when imports rise above historical norms. This is usually roughly calculated as the average of the previous three years.

Herein, I suspect, lies some of the wrangling between the EU and US. You’ll remember that Canada was pretty angry when Bob Lighthizer removed their aluminium tariffs and then reimposed them based on what he said was a “surge” of imports. Opponents of the tariffs argued that yes, there was more Canadian aluminium entering the US than when they were subject to tariffs, but the volume was at a similar level to 2017 and earlier.

There’s also some trickiness on WTO-compliance if the S232 tariffs were converted to “safeguards” designed to handle a sudden flood of imports. Yesterday, Dombrovskis was very careful not to be drawn on whether he thought US deals with Canada and Mexico, or the tariffs, were WTO compliant. But he did say that any deal with Europe would be WTO compliant, and that it would “respect historical trade flows pre-Trump tariffs”. Which sounds a lot to us as if Europe is heading down the quota route, but we really couldn’t get any more out of Dombrovskis ahead of his meetings with Tai and Raimondo.

A broader point: the legality of the S232 tariffs has been challenged by several countries. Both Europe and Washington will want to avoid an embarrassing fight at the WTO, which in this case would be forced to rule on the legitimacy of what is a trade response to a national security issue. This would not be good for the WTO’s reputation among its many sceptics in Washington: it doesn’t need to hand more ammunition to its enemies over here.

To finish, it’s important to remember that the steel industry in particular, is a powerful political constituent, with mills in states president Biden will want to try and win including Indiana, Ohio and Pennsylvania. United Steelworkers, the union, supports the tariffs, as does the AFL-CIO, the largest federation of US unions. And if we know one thing about Biden’s trade policy, we know that it’s “worker-centric”, so the backing of the unions seems significant. There are, however, plenty of US corporations who’ve complained about the tariffs on both steel and aluminium, including companies who process raw ally into things like cans and big sheet or plate form.

Anyway, the Biden administration, which is trying to run a trade policy that wins back the votes of manufacturing workers is going to have to tread carefully. Simply removing the tariffs won’t cut it — it wouldn’t go down well, for example, in Pittsburgh. The name of their mighty football team? The Steelers.

They may not be the most glamorous global commodity, but the humble pea is seeing something of a price surge. Prices of Canadian peas, often used by producers of meat substitutes, have soared of late.

This is not only about rising demand for alternative non-meat forms of protein, it also reflects a supply shortage that is down to a drought in Canada this summer. Claire Jones

Gina Raimondo has said that the Biden administration will push for American companies to trade with China even as Washington takes an increasingly tough posture on Beijing over human rights and national security. “As the president has said, we have no interest in a cold war with China. It’s too big of an economy — we want access to their economy, they want access to our economy,” Raimondo said.

Meanwhile, the EU commissioner for internal market Thierry Breton is in Asia to court Tokyo and Seoul as partners for the European Chips Act, pitching Europe as a buffer amid US-China trade tensions. (Nikkei, $).

Staying with China, new research suggests that its Belt and Road Initiative has left scores of lower and middle-income countries saddled with “hidden debts” totalling $385bn. The findings imply that many countries’ financial liabilities linked to President Xi Jinping’s hallmark foreign policy initiative have been systematically under-reported for years.

Sahil Bloom has an excellent Twitter thread explaining the problems with global supply chains. And finally, in the latest issue of the Trade Talks podcast, hosts Soumaya Keynes and Chad P. Bown discuss Europe’s trade policy and why the EU is developing a host of new policy tools to address concerns over bullying by trading partners.

Brexit Briefing — Our essential weekly guide to the world, post-Brexit. Sign up here

Scoreboard — Key news and analysis behind the business decisions in sport. Sign up here