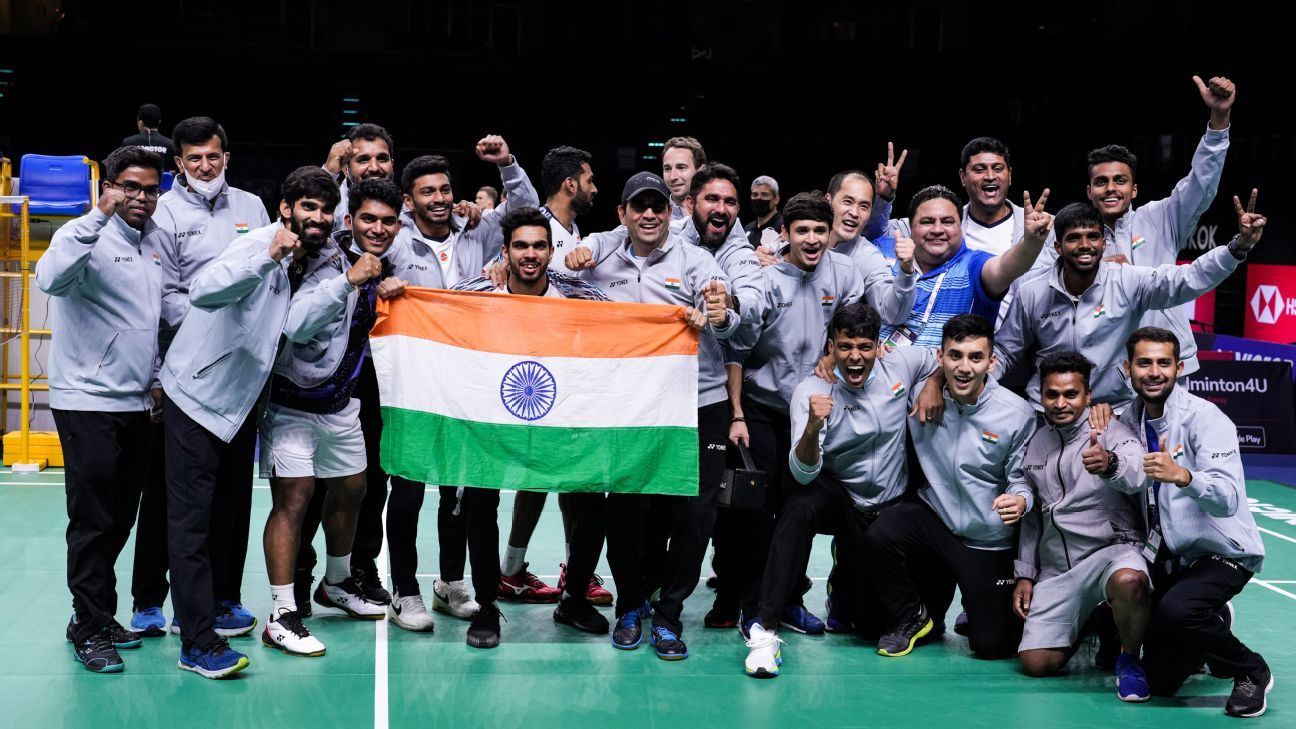 First-time finalists take on defending Thomas Cup champions (who are also the most successful team in tournament history) – the India vs Indonesia final fits the classic sports trope of underdog vs giant.

Indonesia are 14-time champions with two top-10 singles players as well as the world’s best doubles players, even with the legendary ‘Daddies’ and ‘Minions’ pairs split. They were favourites even before the tournament began and have beaten heavyweights China and Japan in the knockouts.

But when unprecedented national team sporting glory is there for the taking, do the numbers on paper count?

Realistically, in a best-of-five match format (three singles, two doubles) with almost all players playing to their potential, a first-ever gold medal is not beyond reach for India. Individually, the Indian players have the wherewithal, and some positive previous experience, of beating the Indonesians. Add to that the uplifting team atmosphere and the confidence boost of thrilling back-to-back wins, and the young side appears to have the right mix of skill and self-belief.

What do the numbers say?

In the Thomas Cup, the match draws are based on BWF rankings, which means the top-ranked players face off in first, and so on. This will then be the likely playing order:

World no. 9 Lakshya Sen will be up against world no. 5 Anthony Sinisuka Ginting to start off. Sen has been a bit off-colour in the big matches so far, having lost his last three opening ties to higher ranked players Chou Tien Chen, Lee Zii Jia and Viktor Axelsen. Ginting himself didn’t have the best of starts, losing all three matches in the group stage, before bouncing back with three-game wins in the quarters and semis.

Indonesia ���� and Japan ���� push each other to the limits in a pulsating Thomas Cup semifinal.#ThomasUberCups #Bangkok2022 pic.twitter.com/ZrrjxzpTH4

Sen, though, will have the slight advantage of knowing he has a 1-0 record against Ginting: he beat him in straight games at German Open in March, part of the string of big results that made him the top-ranked Indian. He stretched Jia in the first game of the quarters and looked to be hitting his stride against Axelsen in the semis. If the 20-year-old Sen can find his peak from the early part of this season, there is a very good chance he can hand India the early advantage.

Even if Sen doesn’t, the underrated advantage of having the youngest member upfront means India has the two singles veterans in Kidambi Srikanth and HS Prannoy to come later.

For India to win the final, for Prannoy to have a chance at clinching a thrilling fifth match for the third straight tie, Srikanth’s performance bang in the middle of the tie will be crucial. World No 11 Srikanth has had a 100% record (5/5) this week and will be up against world no. 8 Jonatan Christie, who has lost just one match in Bangkok so far. Christie has been in good form in 2022, with a title at the Swiss Open and runners-up finishes at the Korea Open and the Asian Championships, beating Srikanth – who has a 4-5 record against Christie – in two of those. But Srikanth is playing at good mental level and would look to tie the record to keep India alive in the final.

If the final goes to the wire, world No 23 Prannoy will likely play world No 24 Shesar Hiren Rhustavito. He has been a wild card in this loaded Indonesian line-up – having won all three group games (where all matches are played) and stepping up to seal the semi-final against Japan after not being needed in the quarters against China. Prannoy, meanwhile, has won all five matches he has played, two under intense pressure and even an injured ankle.

The two have played each other twice before with the Indian leading 2-0, but that was back in 2010 and 2017 so this final will be a clean slate. Both players will be brimming with confidence given their latest exploits.

For Prannoy to get another shot at creating history, though, India will have to overcome what might be the biggest obstacle in this Thomas Cup final – Indonesia’s doubles might.

They have three players of the world’s top two teams – Kevin Sanjaya Sukamuljo, Mohammad Ahsan and Hendra Setiawan – in their ranks (Marcus Gideon is injured). They also have the world no. 7 pair of Fajar Alfian and Muhammad Rian Ardianto. To give context of their strength in this department — the 2022 All England champions (Muhammad Fikri and Bagas Maulana) are in the reserves while last month’s Asian Championships winners (Kusumawardana and Yeremia Rambitan) are not even in the squad!

For India, the world no. 8 pair of Satwiksairaj Rankireddy and Chirag Shetty will be tasked with stopping this juggernaut. What might work in their favour is that the first doubles combination is a mix of the ‘Daddies’ and ‘Minions’ since injury has forced the prolific partnerships to break. Ahsan and Sukamuljo have played the last three matches together, winning two of them, but this irregular pairing of the world’s best does offer some hope for Indians.

But the second doubles pair, has switched between the relatively untested, selection trial winning pair of Krishna Prasad Garaga and Vishnuvardhan Goud Panjala and MR Arjun and Dhruv Kapila, who have a bit more experience on tour. This might prove to be a decisive call if it comes to it.

In the end, it will all come down to the ‘Davids’ in the proverbial showdown against ‘Goliath’. Can India’s singles experience come to the fore? Can the doubles teams punch above their weight to keep the dream alive? Can one of the country’s best men’s teams in history go where no Indian team has before?