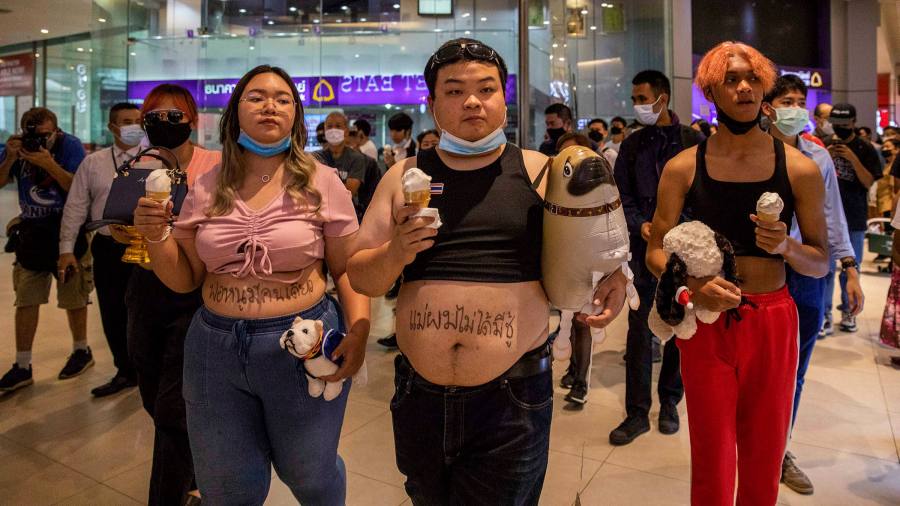 At the height of Thailand’s democracy protests, youth activists staged a campy People’s Catwalk faux fashion show on a street in Silom, a Bangkok district known for its gay nightlife.

One of the models who strutted down the red carpet on October 29 2020, was Sainam, a 16-year-old who wore a black crop-top, an exercise garment King Maha Vajiralongkorn has been photographed sporting during his stays in Germany and Switzerland.

The People’s Catwalk was meant to be a satirical poke at the king’s daughter Princess Sirivannavari Nariratana, a fashion designer who was staging a show the same evening in another part of Bangkok.

It was one of many demonstrations staged in the second half of 2020, when Thailand’s youth protesters made history by demanding limits on the power of the king, whose role at the pinnacle of the constitutional order is rarely publicly challenged. The activists were testing the limits of the kingdom’s repressive lèse majesté law, which makes it a crime punishable with up to 15 years in prison to “defame, insult or threaten” members of the royal family.

Little more than a year later, Sainam — his lawyers are withholding his family name because of his age — is one of scores of people charged with lèse majesté for the fashion show and a separate incident in which he was accused of spraying paint on the king’s portrait.

Jatuphon Saeung, 22, a female participant in the fashion show, was indicted under lèse majesté after posing in a pink costume and clutch purse that appeared to resemble outfits worn by Queen Suthida, the king’s wife.

The indictments are part of a crackdown on political dissent and free expression in Thailand of a scale unseen in years, and which has escalated in recent months, according to human rights groups. Since November, Thailand’s Constitutional Court has effectively outlawed debate on reforming the monarchy, and the country’s broadcasting authority has warned media not to report on the topic.

Authorities have denied bail to some activists and revoked others’ passports. Prime Minister Prayuth Chan-ocha’s military-backed, royalist government approved a draft law on non-governmental organisations that could obstruct or prevent civil society groups from working in Thailand, according to Amnesty International.

“The level of oppression has gone to a new high,” said Sunai Phasuk, a researcher with Human Rights Watch. “This is not just about targeting activists or NGOs or human rights groups or media; this is about shutting down the civic space entirely.”

A government spokesperson said the draft NGO law would need to comply with the constitution, adding that while they understood civic groups’ concerns, there was a need for “accountability and transparency” in the sector. The spokesperson did not respond to questions about the lèse majesté prosecutions or warnings to the media.

Thai Lawyers for Human Rights, which represents some of the people charged with lèse majesté, who include children, said it had dealt with 164 cases involving 168 individuals over the past year, the largest number it had ever encountered.

“Before we had high-profile cases, but not so many in number,” said Sirikan Charoensiri, a Thai attorney with the group. “And the people who are getting charged are young.”

According to human rights groups and activists, the protests at which activists wore crop-tops appeared to have touched a nerve. Seven people, including protest leader Parit “Penguin” Chiwarak and two 17-year-olds were also charged with lèse majesté after wearing crop-tops at another December 2020 protest in a Bangkok shopping mall.

“It’s very difficult to say why this form of dress can be an insult or defamation of the king,” said Yingcheep Atchanont, manager of iLaw, a Thai NGO.

In the first years of the reign of Vajiralongkorn, who succeeded his father Bhumibol Adulyadej in 2016, no lèse majesté charges were brought.

But that changed in 2020 after the young activists shocked traditionalist Thais by demanding that Prayuth resign as well as the imposition of limits on the power of the monarchy and taxpayer funds that support it.

In October that year, demonstrators marched on the German embassy in Bangkok to demand Berlin open an investigation into whether the king was ruling Thailand from German soil.

Apart from their political demands, the protest leaders also impersonated or mocked the royals at some demonstrations. Penguin donned garb appearing to mock both Queen Suthida and Sirikit, the Queen Mother, while protesters wearing crop-tops turned up regularly at rallies.

The Thai king appears in public in his home country in dress uniforms or a suit. But photographers have captured the monarch, a cycling enthusiast, wearing the midriff-baring top in Europe. Thais have shared the photos widely online, though some pro-monarchist users argued the images were faked.

While Thai prosecutors cracking down on alleged royal defamation have not asserted that wearing a crop-top was a crime, their indictments have accused the protesters of mocking or insulting the king or other royal family members. Participants in the mall protest scrawled antimonarchist slogans on their midriffs and backs.

In November, authorities deported Yan Marchal, a French long-term resident of Thailand, describing him as a danger to the public. A Thai speaker, Marchal posted satirical videos in which he made fun of Prayuth and other Thai figures, including one in which he cavorted in a crop-top and made reference to the king’s extended stays in Germany.

“We have been documenting freedom of expression issues for more than 10 years,” said iLaw’s Yingcheep. “We can say the past year has been the most challenging year we have ever witnessed.”