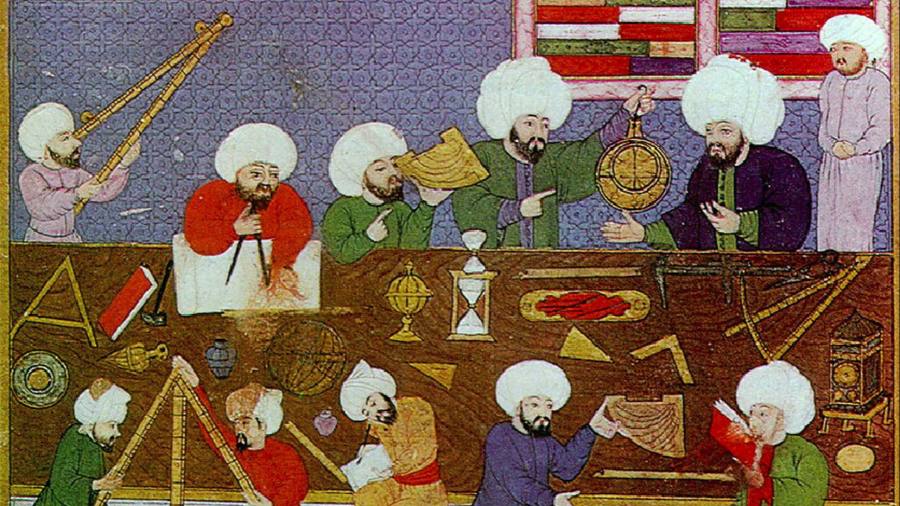 On my last visit to Istanbul, while passing along the Golden Horn in bright autumnal light, I came across a semi-deserted Ottoman tomb complex. A shady garden gave on to the courtyard of a mosque, behind which stood an octagonal tomb tower. This, I read, was the mausoleum of a long-forgotten Ottoman admiral, named Kilic Ali Pasha. The Pasha had distinguished himself fighting the massed navies of Christendom’s Holy League at the Battle of Lepanto in 1571. For his bravery in this disastrous battle — where 200 out of 230 Ottoman ships sank and some 50,000 of their seamen lost their lives, he was made the Kaptan Pasha, or High Admiral. In 1573 he went on to seize Christian Cyprus from the Venetians.

Here, it seemed, was a figure who might be taken to personify the Clash of Civilisations — “The Terrible Turk” incarnate — until, that is, I discovered that Kilic Ali was actually a Calabrian named Occhiali who had chosen to convert to Islam to enter Ottoman service. Any assumption of some inevitable battle between the forces of Asia and Europe was further challenged when I read that the complex had been constructed by another Christian convert, the great Sinan, formerly an Armenian named Joseph, and that the mosque was modelled on the great Byzantine church of Haghia Sophia. During the same period, the most powerful Ottoman vizier was the eunuch Hasan Aga, formerly Samson Rowlie from Great Yarmouth, while the Ottoman general known as “Ingliz Mustapha” was in reality a Scot, a Campbell no less, who had embraced Islam and joined the Janissaries.

Kilic Ali Pasha’s Istanbul tomb was situated in the perfect position for a man who lived such a cross-cultural life, balanced between two continents. Yet, for all its exoticism, Istanbul, the New Rome of the Emperor Constantine, has always been a European city. And while the Ottomans’ Turkic roots lay in Anatolia, and before that Central Asia, they nevertheless played a central part in European history: indeed at their peak, controlling one bank of the Danube, and encamped in the suburbs of Vienna, the Ottoman’s global empire governed nearly a quarter of Europe, including all of modern Serbia, Bosnia, Macedonia, Albania, Bulgaria, Hungary and Greece. They were also western Europe’s biggest trading partner. These are the central facts that underlie Marc David Baer’s magnificent new book, The Ottomans.

“Like its language, the Ottoman Empire was not simply Turkish,” writes Baer, professor of international history at the London School of Economics. “Nor was it made up only of Muslims . . . Like the Roman Empire it was a multi-ethnic, multilingual, multiracial, multireligious empire . . . It was a European Empire that remains an integral part of European culture and history.”

The Ottomans believed that their advance into Europe meant that they were the inheritors of Byzantium and should therefore be considered the new Romans. This was something that people around the world were once happy to acknowledge: “Arabs, Persians, Indian and Turks referred to the Ottoman rulers as Caesars and their dominion as the Roman Empire,” writes Baer. “Beginning with the Ottoman conquest of Constantinople, some Western European writers did too . . . Why have we forgotten what Europeans thought five hundred years ago? The Ottomans did not evolve in parallel with Europe; their story is the unacknowledged part of the story the West tells about itself.”

Like a swift Ottoman caique cutting through the Sweet Waters of Asia, Baer’s taut prose splices stereotypes and makes us think twice about long-held assumptions. For an empire once so threatening to the outside world, the Ottomans remain today one of the least explored areas of global history: “the forgotten giant” as one Ottoman historian has called it. Today, if they are remembered at all, the Ottomans are usually dismissed in the west as aggressive but ultimately decadent and intellectually incurious warriors who controlled an old-fashioned land empire and who were ultimately defeated by the intellectual firepower of European science, then finally outflanked by its growing transcontinental sea power. Harvesting the fruits of a remarkable wave of recent scholarship, including his own long labours in the Topkapi Palace archives, Baer convincingly shows how comprehensively wrong all these different assumptions are.

Baer opens his book with a wonderful description of working in the archives when he caught a glimpse of one of the great treasures of the collection, the map of the Ottoman admiral, Piri Reis, a predecessor of Kilic Ali Pasha: “At his own initiative, Piri Reis of Gallipoli, a former corsair . . . had drawn one of the earliest surviving maps of the coastline of the New World,” he writes. “He had based it on Columbus’s original, which is lost, and even interviewed a crew member from Columbus’s voyages. To produce for the sultan one of the most complete and accurate maps of the world, Piri Reis had consulted ancient Ptolemaic, medieval Arab, and contemporary Portuguese and Spanish maps.” Intent on rivalling the Portuguese from Iberia to Indonesia, the Ottomans were intent on keeping up with European discoveries. Other Ottoman admirals wrote books on astronomy and nautical science and compiled atlases and geographical treatises, though none matched Piri Reis’s great Book of the Sea (1526).

Baer points out that the Ottomans were important players in what we tend to regard as the exclusively European Age of Discovery, that period of exploration which laid the foundations for three centuries of western colonialism. He shows how, following the Ottoman conquest of Egypt in the early 16th century, the Ottomans became a major maritime power in the Indian Ocean, where they battled their Portuguese enemies, and in the interlude before the establishment of Mughal power, even briefly took over the Indian ports of Surat and Diu. Indeed with “ships agile as sea serpents” they projected their power further still, aiming to control oceangoing trade to south-east Asia. No wonder the Sultans referred to themselves as “Lord of the Two Seas and Two Continents,” and “Masters of the Seven Climes”.

The author ably demonstrates how for 200 years, from the mid-15th century, the Ottoman Empire was in fact the most powerful force in Eurasia. From behind the Sublime Porte, the Sultan and his Viziers ruled a patchwork of peoples, languages and religions across many times zones: decisions made in Constantinople affected millions across the globe. From his palace on the Bosphorus, the 16th-century Grand Vizier, Mehmed Sokollu Pasha, a Serbian convert from Christianity and son-in-law of Selim II, simultaneously planned canals between the Don and the Volga, and the Red Sea and the Mediterranean; one day he might send artillery experts to the Sultanate of Aceh, Sumatra, to cut off the Malacca Strait and dispatch agents to fan rebellion against the Portuguese across the Indian Ocean; the next, choose a new king of Poland to thwart the Russians; the third, dispatch “musketeers to fight as guerrillas on the side of Morisco rebels in Andalusia.” He ordered pictures from Venice and commissioned an eleven-arched bridge over the Drina river. His inner circle included “Jewish courtiers, Venetian ambassadors and members of the Ottoman Greek elite.”

Ottoman merchants were equally innovative, cultivating tobacco and tomatoes, tapping into the rich vein of trade in spices and silk, building watches, clocks and eyeglasses and turning coffee into a global fad.

Nor — at least at first — was this an intolerant empire. Although tensions always existed between Muslim rulers and the religious communities living under their capricious thumb — by modern standards, Christians and Jews, the dhimmi, were treated as second-class citizens — there was at least a kind of pluralist equilibrium — what Spanish historians have called convivencia or “living together” — which had no parallel in Christendom. When the Catholic kings evicted the Jews from Granada, they were granted asylum within the Ottoman Empire. Salonica soon had a Jewish majority.

It was only when, as Baer puts it, “the Ottomans turned away from incorporating diversity that . . . tolerance was replaced by ethnic cleansing and genocide,” and the empire promptly collapsed, as a tidal wave of nationalist uprisings spread from Bulgaria and Greece, replacing multi-ethnic diversity with a series of mono-ethnic religious nationalisms. The last Sultans sealed their fate by condoning the anti-Armenian pogroms that culminated in the terrible massacres of 1915-16. Then, in the darkest moment in Turkish history, maybe 1.5m Armenians were starved, beaten or bayoneted to death in a genocide that is said to have inspired Hitler. In the aftermath, the Anatolian Greeks migrated to Greece, the Jews to Palestine, and those Armenians who survived, to a truncated soon-to-be-Soviet Armenia and the US.

Until the twin forces of President Erdogan’s Neo-Ottomanism, and the Netflix Ottoman mega-drama Ertugrul reminded them, even the Turks had come to ignore an imperial past they had been taught by Ataturk to think of as the decadent “sick man of Europe”. Few western historians have had the knowledge of Ottoman Turkish to prove them wrong. Marc David Baer’s important and hugely readable book — a model of well-written, accessible scholarship — goes a long way to correct this.