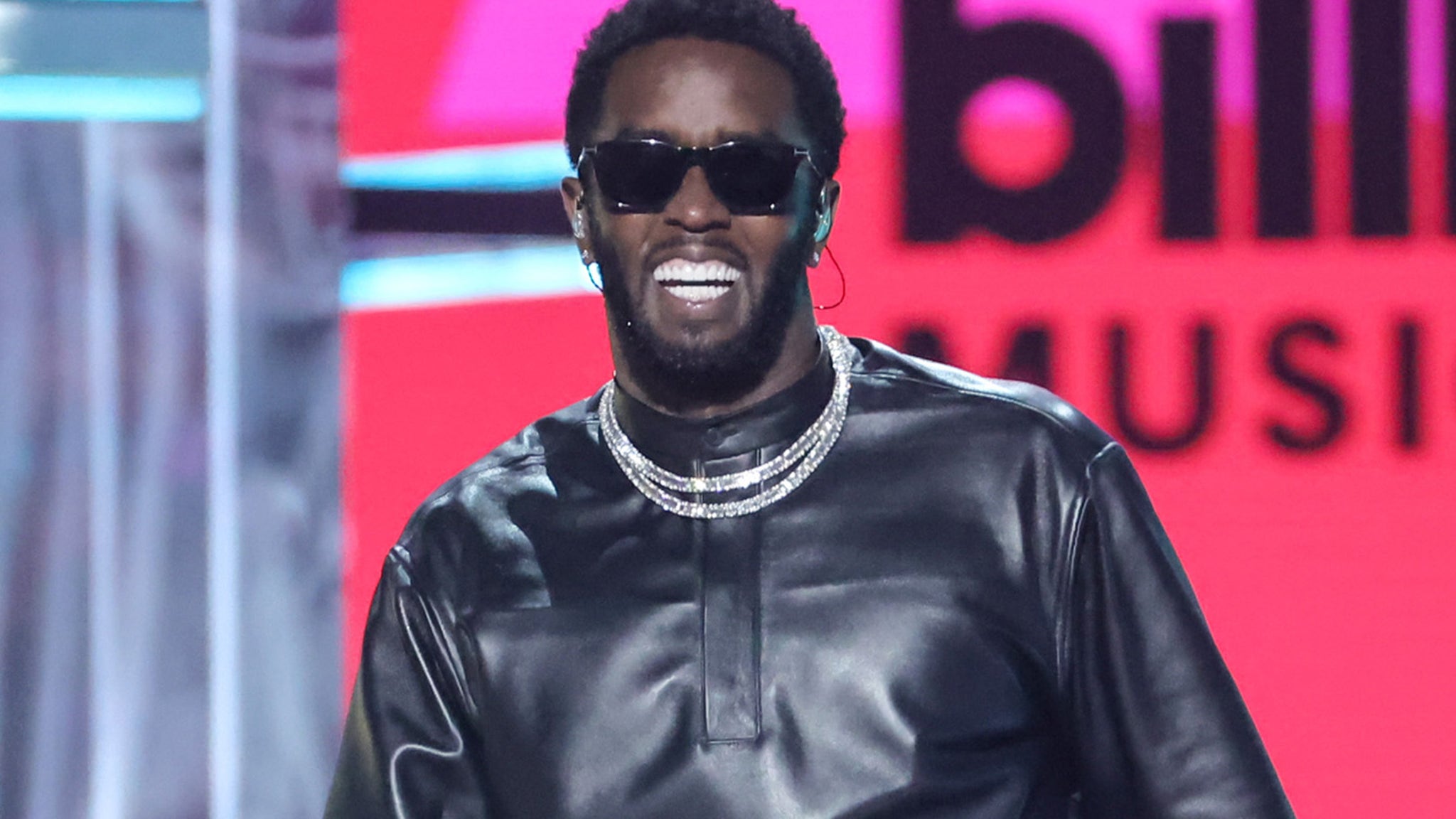 These are the moments that had everyone talking.

Diddy may have been a surprising choice to host the 2022 Billboard Music Awards, but it’s because of this very surprise factor that he turned out to be the perfect host.

As award shows ratings continue to decline and people on social media question their relevancy anymore, Diddy came out and started the show by talking about how much he hates award shows — and that’s why he agreed to executive producer and host this one.

From the jump, the stage was set for an unorthodox production with a freer and looser energy than most award shows — think the Golden Globes without all those problems! It did mean the censors had to work hard to keep up with their host, presenters and even winners.

We were dying when Megan Thee Stallion announced that they’d told her it was okay to curse, because we were starting to wonder — certainly everyone seemed down to do it. She quickly said they hadn’t said that, after all, so they just took Diddy’s advice to be free straight to their hearts.

Before the show even began, a somber note was struck and a moment of silence as the BBMA and NBC shared a message of solidarity and support for the tragic deaths and victims of violence in Buffaly, NY and Laguna Woods, CA this weekend.

Lisa Marie Presley Weighs in on New Elvis Biopic, Breaks Her Heart Late Son Won’t Get to See It

“All of us at the Billboard Music Awards and NBC condemn the horrific events of this weekend. These insane acts of violence in Buffalo, New York and Laguna Woods, California remind us that we have so much work to do if we are to never again be confronted by such unspeakable tragedies. Our hearts and love go out to all those affected in those communities.”

It’s a stark reminder that the world is sometimes all too real just outside our doors. But maybe it’s okay every once in a while to step back from it and enjoy some silliness while we watch famous people win awards and perform for our entertainment.

As always, the BBMAs are filled with some incredible live performances crossing all genres, with Silk Sonic, Bryson Tiller, Jack Harlow and Rauw Alejandro among the night’s earliest performers. Diddy’s opener also featured him on stage with Teyana Taylor and his son Justin Combs, who dropped into a very impressive splits.

Perhaps the cross-genre brilliance that makes the BBMAs about all music was summed up best when country music artist Lainey Wilson handed Megan Thee Stallion her first trophy during the show — it was just so beautifully awkward as Megan appeared to have no idea who she was. Lainey went in for the hug and had to settle for an awkward hand on the back. We were cringing right along with her, but loving that cross-genre energy at the same time!

Diddy set the stage for a wild and unscripted party from the jump. After starring in a multi-artist opening hip-hop extravaganza, the host and executive producer made it clear from the top that he didn’t give a f—. And he did so by giving a “f—.”

He explained that he only agreed to host and executive producer the show because “I hate awards shows.” He went on to say that they’re “boring.”

“You know why they’re boring?” he asked, before answering, “Because of the people at the award shows. We’re not having that in here tonight, no, no, no. We’re gonna get lit in this f—!”

He went on a long tirade about how this whole evening was going to be a party and not a TV show (even though it’s totally a TV show), and even insisted, “I told the producers I’m not doing anything they say. I’m not listening to any of that stuff because I’m the freest (n-word)!” The censors were quick enough to stop this one.

Diddy even addressed the elephant in the room at this and every award show over the next year with a fun little warning. “In the spirit of being free, if you’re feeling a little bit froggy … and you decide to jump on this stage tonight, I do suggest you have your affairs in order, okay?” he said, adding with a smile, “And I say that with love.”

First Presenters F— It Up

Right away, Diddy’s promise that this would be more of a party than an awards show came true as City GIrls’ Young Miami & JT immediately screwed up their presentation, with JT ready to announce the winner for Top R&B Artist before any nominees had been presented.

“The winner!” she shouted, before her partner could be heard saying quietly, “No.” After a pause, the censors proved they were ready to be more on top of things after that f-bomb slipped through, but we could still read her lips as she said, “Oh s—!” and Yung Miami laughed.

At least things quickly got back on track and the montage of nominees was played before Doja Cat picked up the award. They would not stay on track long, though.

And while Twitter spent the better part of the night talking about it, we kind of think the less said about that wardrobe issue the better. The censors were all over any audio slip-ups tonight, but nobody caught a major visual one? Is it so hard to keep the camera at waist-up level?

Britney Spears Reveals She Suffered a Miscarriage: ‘We Have Lost Our Miracle Baby’

Hopefully the censors had plenty of coffee and flexed their fingers because the bombs kept coming. Megan Thee Stallion dropped an epic face when she discovered that she’d won Top Female Rap Artist — and she held it a lo-o-o-ong time.

That gave the censors plenty of time to prepare, because when she hit the stage and awkwardly had no idea what to do with this excited country artist (Lainey Wilson) trying to give her an award and a hug, she was ready to bring that “hot girl” energy to the mic.

She even gave them a false sense of security, first saying that this was “real hot girl stuff,” before correcting herself and saying, “hot girl s—.”

“They said we could curse,” she laughed, before quickly adding, “They didn’t say that.” But it hadn’t stopped almost everyone who’d hit the stage before her, so why should it stop her?

Diddy Brings Activism to the BBMAs

“When I told the people that I wasn’t gonna do what they wanted me to do, I didn’t tell them about this,” Diddy said about an hour into the show, before bringing up activist Tamika Mallory to give her an award for all of her incredible work fighting against racism and discrimination.

He told her that the show supported him in this decision, though, “because you are one of the most fearless people that I know, you fight for us on the front lines, and we just pay so much respect for you, queen. We love you.”

She went on to urge everyone in the audience and at home to get involved in the fight for justice. “If you are not doing anything at this time, you’re actually doing something by being silent,” she said.

Naomi Judd’s Public Memorial Service to Be Televised, Will Air Live on CMT

Glass Animals were stunned to win Top Rock Artist as they figured they were the least rocking among the nominees. But they were even more stunned later in the show when they picked up their second award of the broadcast — for being so slow!

Shenseea explained that for the first time ever, the BBMAs had partnered with Pepsi to honor a Mic Drop moment. And for the first honoree, they chose a “moment” that was 59 weeks in the making. That’s how long it took the band’s “Heatwave” to rise to number one on the charts.

The song started at number 100 and stayed on the charts continuously from January 2021 before it reached its peak at March 2022, making it the longest sustained rise up the charts to culminate at the top.

“I think I can say that never in the history of the world has anyone been given an award for doing something the slowest, but we will take it,” said Dave Bayley of what has to be the slowest mic drop in history, too.

A recipient herself of the Icon Award in 2018, the audience was stunned into silence, followed by euphoric applause, when Janet Jackson walked casually out to introduce and honor her friend, and this year’s recipient, Mary J. Blige. To say it was a surprise would be an understatement.

Jackson was looking incredible, as always, and she tried to give the crowd enough time to calm down before she began speaking — but even so, she had to stop and wait after she asked, “What makes an icon?” Clearly the answer was looking out from the stage at all of those smiling faces.

it was also Blige herself, who came up to a thunderous applause of her own and a warm hug from her friend. And Blige had a message for every generation. For the youngest among us who think viral fame can create instant legends, Blige had a reality check that it doesn’t work that way. “It takes a lot of time and hard work, and a lot of surviving trial and error to achieve greatness,” she explained.

She spoke about the struggles she’s endured in her life, and how that informs her music. “God helped me to channel those emotions and experiences into my music,” she said. She spoke, too, of being ahead of her time by decades, rising to the top of hip-hop while it was still fighting for a spot at the mainstream music table.

Perhaps the best summary of her story and the whole story of her music came when she said. “The message of my music has always been, we are not alone in our struggles. I spent a long time looking for real love. I finally found my real love, and that real love is me.”

‘Married … with Children’ Revival In the Works with Original Cast

You can check out all the winners at the 2022 Billboard Music Awards below: