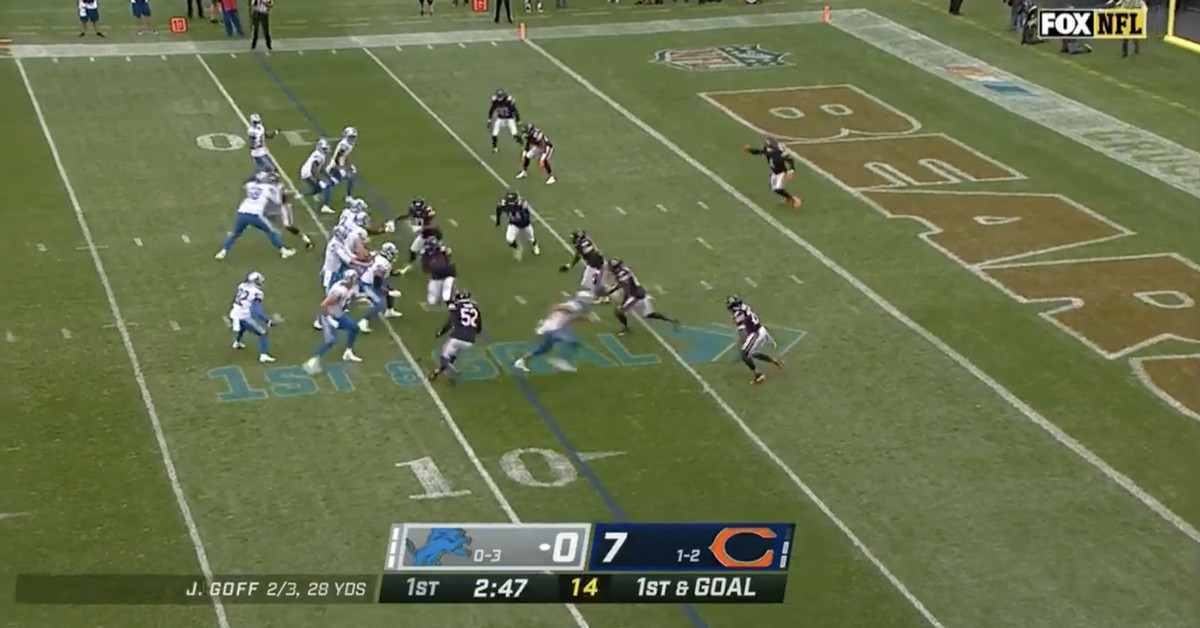 The Chicago Bears and Detroit Lions both badly needed a win as they met at Soldier Field in Week 4. The Bears, at 1-2, were coming off arguably the worst offensive performance in franchise history a week earlier when they averaged only 1.1 yards per play in a loss to the Browns. The Lions had competed in each one of their games thus far, but were still looking for their first win of the season. Both of these teams would have considered a loss to each other pretty humiliating.

Chicago had some good vibes going early thanks to a few nice passes by rookie quarterback Justin Fields, and a pair of tough touchdown runs by David Montgomery. The Lions, meanwhile, kept driving deep into Bears territory, but were struggling to put points on the board. The most prominent example of this happened on their first offensive possession, when the Lions somehow fumbled the ball in one of the strangest ways you will ever see.

As Detroit quarterback Jared Goff walked up to the line to communicate a change in pre-snap coverage, his center accidentally snapped the ball. The ball banged off Goff’s groin and straight into the hands of Bears defensive tackle Bilal Nichols.

The fumbled happened so quickly that it startled both teams. An alternate angle of the play shows it a little more clearly.

Goff was checking the protection as he walked up to the line. Nichols looked shocked to see the ball ricochet directly into his hands into his hands. This play was counted as a fumble, but it felt more like an interception in a sense because the ball never touched the ground. This might be the first ever direct snap to the defense.

The Bears held on for a 24-14 win. For at least a week, Bears coach Matt Nagy knows his job is safe even as frustration about the team’s performance against Cleveland lingers.

This type of thing can only happen to the Lions. After losing on an NFL record 66-yard field goal from Justin Tucker last week, now they somehow lose a winnable game in part because their center snapped the ball directly into their QB’s groin.

There’s nowhere to go but up for the Lions. New Detroit head coach Dan Campbell is going to get that first win eventually.