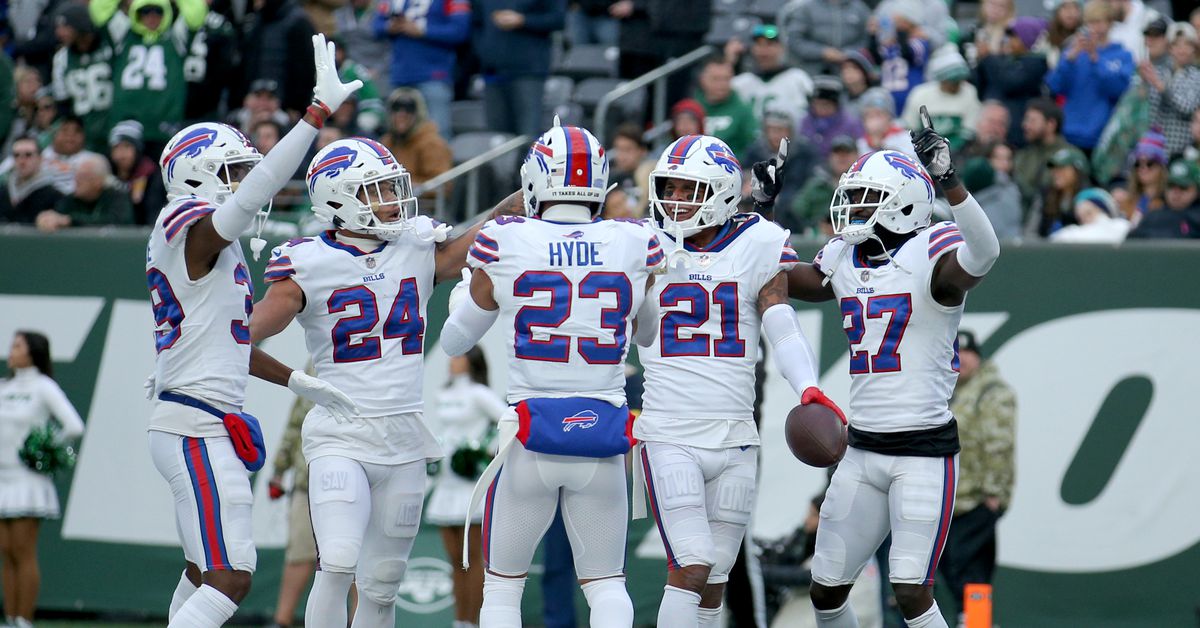 In a weird way the Bills have been flying under the radar. The biggest reason for this is twofold: there were expectations the team was going to be great in 2021, so it’s easy to ignore — and secondly, the Bills offense has really been quite average. So, there haven’t been a lot of SportsCenter-worthy highlights this season from Buffalo.

Lost in all this is Buffalo’s defense, which is truly something special. It also defies any and all expectations we have for defense in the NFL.

Conventional wisdom tells us that pressure is generated by blitzing. Football has worked that way for generations. The Bills are iconoclasts in the most dramatic way.

To compare, the Buccaneers are generating pressure on 26 percent of snaps, but blitzing a whopping 40.3 percent of downs. But what does this all mean? One would think it doesn’t matter what the journey is if you reach the same finish point, but that’s simply not the case.

With the Bills generating this much pressure using a standard front alone, they rarely need to commit linebackers or members of the secondary to assist with the pass rush. This results in an absolute nightmare for quarterbacks, who aren’t just under pressure almost every third snap, but they can’t find open receivers when they do.

If we go back to the Buccaneers for a second, that ludicrously high blitz rate has a payoff. Tampa Bay is allowing one of the highest completion percentages in the NFL, and over 1,200 yards after the catch. This translates into a team that does get burned through the air, but relies almost entirely on their pass rush to stop plays developing before the ball is thrown.

Now, we return to the Bills. Against the pass they’ve been phenomenal.

Oh, Buffalo is also third in the NFL in rushing yards allowed, as well as average yards per carry.

So let’s put all this statistical stuff aside and break down what it means in a sentence: This team does not have a single weakness on defense.

That is not hyperbole. There is absolutely no way to attack the 2021 Bills defense. It just doesn’t happen. The only defensive blemish this team has is giving up 143 rushing yards and three touchdowns in a loss to Derrick Henry and the Titans, but that’s Derrick Henry. It’s a rare event, and outside of that nobody is having luck.

The issue for teams looking to scheme against all this, is that there’s no really good way to even play against them. The remarkable thing about Buffalo is they’re playing extremely conservative defensive football, but generating results like an incredible aggressive team. This has not happened, well, ever.

No team in recorded history in the NFL has led the league in pressures while blitzing less than 20 percent of downs. It just hasn’t happened before. The result of this is a defense so smothering that on average they’re spotting the offense 8.2 points per game. Meaning they are statistically contributing points, because of how adept that are at stopping other teams.

Only four teams in the NFL this season are having a positive defensive expected points contribution, and nobody is really close. The 2021 Bills are on pace to give 139.53 points this season. The 2020 Rams led the league with 85.89 points.

I know this is heavy, and dense — but the result is that Buffalo’s defense is so dominant the only thing that can stop them from destroying everyone is offensive troubles. It’s just that simple. If you ascribe to the idea of “a good defense beats a good offense,” well, the Bills should be Super Bowl champions.