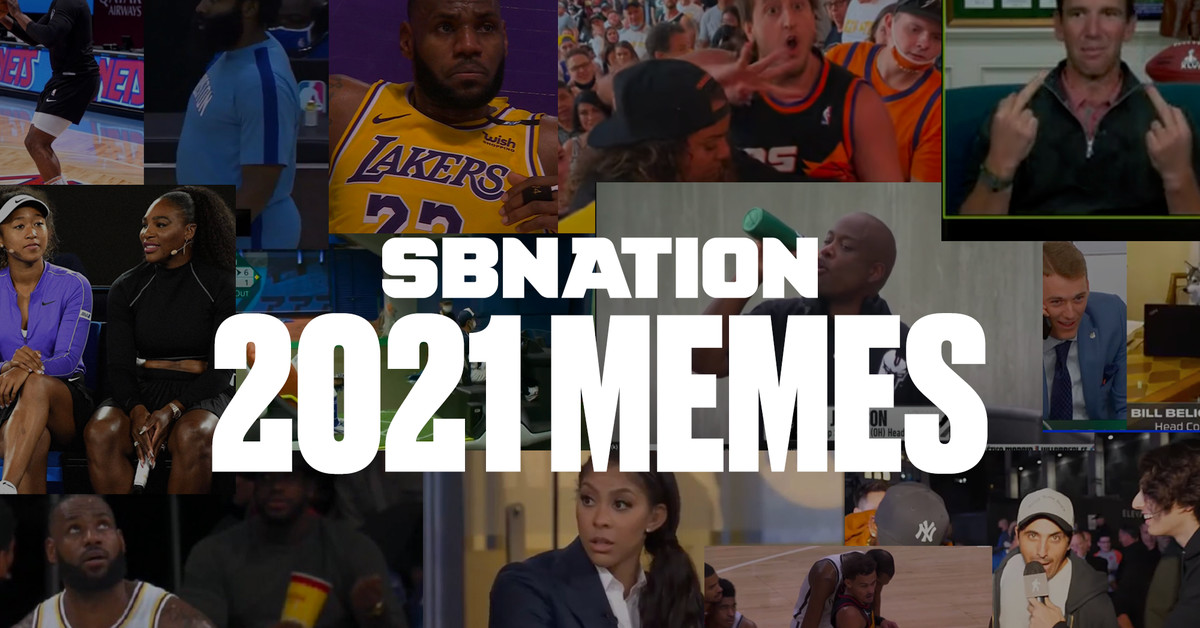 If you’ve ever taken more than a day off from checking social media, you might feel like you missed a year’s worth of stories and memes. Returning to the timeline can feel like trying to learn a foreign language, working backwards to understand the compounding references and jokes.

As perpetually online sports fans, we’re here to help out. We’ve handpicked our favorite moments and memes from each month of 2021 to recap a wild year in sports.

January: James Harden immediately slims down after being traded

2021 began with a bang when James Harden was traded to the Brooklyn Nets after the superstar’s relationship with the Houston Rockets deteriorated. Between apathetic play and a general disrespect for optics, Harden appeared at games throughout the beginning of the 2020-21 season looking, well, chunky. It seemed like every Rockets game resulted in a new screenshot where he looked more out of shape than the last.

Eventually Harden was traded in a four-team blockbuster on Jan. 14. Two days later he made his debut with the Nets looking svelte and energetic as he dropped 32 points and 14 assists in a win over the Magic. It only fueled more jokes as the internet compared the images of old Harden and new Harden side-by-side.

When Serena Williams and Naomi Osaka met in the 2021 Australian Open, it was the first time the two had played each other in a tournament setting since their controversial, classic match at the 2018 U.S. Open.

Throughout the Australian Open, Osaka continued to demonstrate why she’s the sport’s current undisputed star, dominating her opponents when she wasn’t gently handling butterflies mid-match. The rematch with Williams in the semifinal was such a full-circle moment it almost felt scripted. It was one of the best moments in sports of the year, period.

March: Candace Parker schooled Shaq on ‘Inside the NBA’

Shaquille O’Neal had a rough time on “Inside the NBA” to start the year. The Hall of Fame center got called a ‘casual’ by Christian Wood for not knowing who he was. He called Nikola Jokic ‘Russian’ when he’s actually Serbian. Then he harshly criticized Donovan Mitchell on live TV, leading to an extremely awkward moment.

During a discussion on Jokic (who would be named the league’s MVP a few months later), Shaq failed to understand how the game of basketball has changed since his retirement, and was promptly owned by Candace Parker, a moment that was viewed nearly two million times as Twitter indulged in the schadenfreude.

April: Bill Belichick’s dog is the star of the NFL Draft once again

The best moment of the remotely-held 2020 NFL Draft was Bill Belichick’s dog Nike appearing to manage the Patriots affairs during a cutaway shot. This year, everyone had fun running with the joke as the Patriots made their picks, including the Patriots themselves as Nike made a guest appearance to help Belichick pick in the seventh round.

New England had the last laugh, however, as Jones not only looks like a potential Rookie of the Year, but has the Patriots atop the AFC and rolling.

May: LeBron’s “three rims” play-in game winner is the first meme of the NBA playoffs

As the dust settled on the 2020-21 regular season, it seemed almost too good to be true that the league’s two most popular teams would face off in a winner-take-all play-in game. But that’s exactly what happened as LeBron James and the Lakers faced off against Steph Curry’s Warriors.

The game was immensely entertaining as LeBron hit a prayer from the Staples Center logo with a minute remaining to send LA to the playoffs. Just minutes prior, LeBron was poked in the eye by Draymond Green, and after the game said he saw “three rims” as he pulled up for the game winner and “aimed for the middle one.” The three rims comment, as well as LeBron’s reaction after Draymond’s foul became instant meme-fodder.

As the Phoenix Suns ripped through the powers of the Western Conference en route to the NBA Finals, one hero emerged during the team’s second round series against the Denver Nuggets.

Near the end of Game 3 between Denver and Phoenix, a fight broke out between fans of the opposing teams. In a video that racked up over 8 million views on Twitter, a Suns fan is seen easily dispatching two Nuggets fans while yelling “Suns in 4” between blows. He instantly became an icon of the team’s phenomenal season, and Devin Booker even reached out and gave him an autographed jersey and Western Conference Finals tickets.

July: Baseball glove car at the Olympics steals the show

A year late, the 2020/1 Tokyo Olympics finally took place over the Summer. And while there were plenty of moments throughout the games to highlight, our personal favorite was this adorable little GLOVE CAR designed by Toyota specifically for Olympic baseball.

The Olympic bullpen car is amazing. The giant baseball glove seat is even a CDC recommended 6-feet behind the driver for social distancing. pic.twitter.com/DPiyj2Gvbe

Everything about it, from the glove seat, to the mini turf diamond floor, to the front screen displaying “GO! GO!” is just adorable. It was a perfectly appropriate moment for one of the strangest Olympics ever.

An innocuous high school football game broadcast on ESPN in August ended up being one of the biggest sports scandals of the year when Bishop Sycamore, an unknown school out of Ohio, looked completely outmatched in a 58-0 blowout against IMG Academy in front of a national audience.

It didn’t take long for the truth to come out: Bishop Sycamore seemed to be an imaginary school created solely to get their name on TV and let their athletes get beat down for publicity. It was completely outlandish, and as more absurd details about the school came out, it only fueled the meme fire more.

September: The Manningcast is a hit, Eli flips off America

ESPN experimented with a new broadcast format for the 2021 NFL season, featuring the Brothers Manning on select Monday Night Football games on ESPN2, where they broke down gameplay, interviewed a diverse cast of guests, and generally goofed around. It was an instant hit, and one of the best moments came in Week 3 when Eli Manning tried to demonstrate his experience with Philadelphia Eagles fans, flipping off America with both middle fingers. His immediate apology following the ensuing commercial break made it all the more hilarious. Never apologize, Eli.

October’s meme was a culmination of multiple forces at work. 1) The beginning of a new NBA season. 2) The New York Knicks, perennial underachievers, won a double overtime thriller against the Celtics on opening night. 3) A man-on-the-street social media show called SidetalkNYC exploded in popularity on Twitter and TikTok with bizarre videos of people around New York City.

Sidetalk was outside Madison Square Garden after the season opening win, and captured a scene of hilarious chaos as Knicks fans overreacted to their team’s success. Among dozens of quotable moments, a man yelling “BING BONG” became a motto for the Knicks, and an easy way for opposing fans to troll them as the Knicks fell back down to Earth over the ensuing months.

November: LeBron James has a clone

Spotted in the background of a Lakers game in November was a man who looked suspiciously like LeBron James enjoying a bucket of popcorn. The internet was instantly perplexed. Is King James a time traveller? Is this a Looper situation? Has he been a twin all along?

The truth is much less interesting: the man pictured courtside was Patrick Christopher, a former NBA player and current fashion designer who is actually an acquaintance of James’. As everyone got their jokes off, LeBron couldn’t help but join in.

AYO!! True definition of 2 places at the same damn time!! . Somebody tell Pat C if he wants to be me for Halloween just ask me. LOL https://t.co/XcZ8jeIGYk

December: Kevin Durant gets way up in Trae Young’s business

In a mid-December battle between the Nets and Hawks, things got heated between stars Kevin Durant and Trae Young. Late in the fourth quarter the two had to be separated and exchanged words after Durant pushed Young coming around a screen.

Durant then tried to get into Young’s head by playing defense a little too close. The only thing it seemed to accomplish was making Durant look like a bit of a weirdo to those watching at home.

No hard feelings were had, as KD said after the game: “He wanted to get me out of his space and I understand that … That’s the spirit of the game. I’ve got nothing but respect for Trae Young,” and Young responded with a Tweet saying “Idols become rivals.”