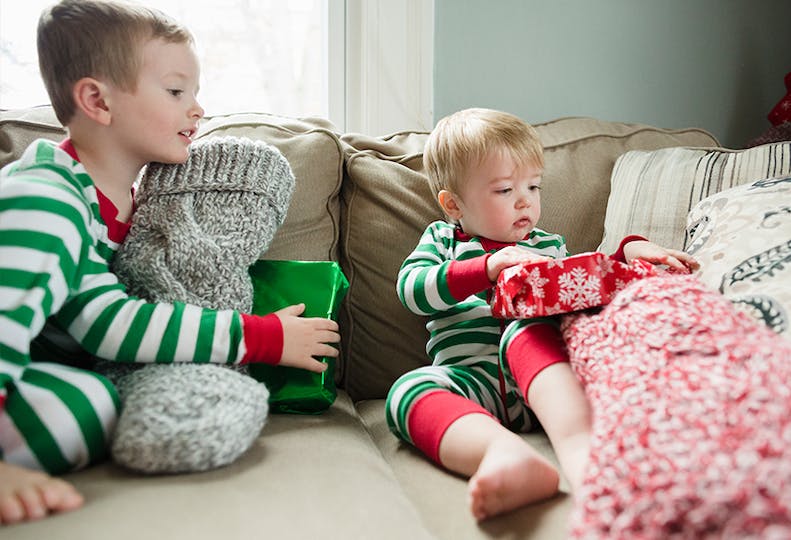 Although the Christmas countdown starts earlier each year (decorated shops in August?!) it never hurts to be prepared for December 25th with a bunch of gift ideas for your family. In fact, your little one has probably started their list for Santa already while you’re writing a “send help!” sign.

Getting it all sorted now, you could save yourself those dreaded last-minute Christmas shops, searching for an out-of-stock toy, by ticking off your little one’s Christmas list now!

Just so you know, whilst we may receive a commission or other compensation from the links on this page, we never allow this to influence product selections.

The best Christmas presents for toddlers

Children are fascinated by the magic of puppetry and this lovely treehouse and puppet set will encourage them to take part in imaginative play to tell stories, bring fairytales to life, and be creative. It comes with the hideaway treehouse and six finger puppets that are sure to ring in the fun on Christmas morning.

Review: “Lots of attention to detail. Really well-made and an excellent gift for nature-loving children. A lovely design, and no short-cuts on the production. Caused some sibling rivalry between a 5-year-old and a 3-year-old but fortunately there are enough puppets in the set to keep everyone happy.”

Bluey, the 6-year-old Blue Heeler dog from down-under has become hugely popular with pre-schoolers since she jumped onto CBeebies this year. Any small fans of the show will be obsessed with this Family Home Play Set.

Review: “I bought this for my three-year-old granddaughter and, as she lives in another town, my son FaceTimed us while she opened it so we could enjoy watching the excitement! She absolutely loves it so it was a big hit! ❤️”

Why not make learning fun for your little one with the VTech alphabet train that can be used for sit-down play, as a ride on, pull-along wagon, or walker. Little ones can use it to help build their confidence with taking those first few steps! Complete with sing-along songs and melodies, there are stacking blocks and a turning book bursting with colour and sound.

Review: “Very nice little train for my 1-year-old son. He loves pressing all the buttons and pushing it around. I also like that you can store all the bits that come with it inside the seat part. Thank you!”

A classic gift for any little one, this magical pint-sized car would make the perfect Christmas present to help your tot with their motor skills.

Review: “My oldest granddaughter has had her red Cozy Coupe for a couple of years and loves it. However, when her little sister reached the age of 1, she wanted to ride in it. We had quite a few screaming matches before we decided there was nothing for it but to get another. Needless to say, big sister claimed the new one because it’s pink and says Princess Coupe on the back. Her wee sister is delighted, though, to get the red one.

“Both cars were reasonably easy to put together although they took quite a while to assemble. They are certainly very sturdy, having been flung out of the shed, ridden round the estate, crashed into things, all the good stuff a Princess and her sidekick get up to. These cars are well-used every time the grandkids arrive, which is often. I love them as much as the girls.”

Bring soft play to your house with this soft, modern ball pit. It would make for a perfect Christmas gift and doesn’t break from excited toddlers jumping in like most plastic ones do! It comes with 300 balls too and you can select from a choice of ball pits with different coloured balls. We love this mix of pastels.

Wooden toys are a lovely gift for toddlers and your youngster will love role-playing with these wooden biscuits, great for imaginative play. They’re perfect for introducing your little one to the concept of choice, sharing, and are great for a teddy bear’s picnic! The set includes nine different biscuits, including very festive gingerbread men, and are made from high-quality, responsibly sourced materials.

Review: “I originally brought these for Christmas for my little one but I was so excited by the look of them when they arrived that I wanted to open them and test them in our pretend shop. These are a great addition to our pretend play. The attention to detail and the quality of them is brilliant. They are slightly smaller than I l thought they were going to be […] I would highly recommend this item. Great product.”

Watch your little one boogie their way through the day with the fun, energising music that Beatbo plays! With dance and move songs, learning, games and a customised sing-a-long mode, toddlers will never get bored of this toy, and it will grow with them.

Review: “Bought as a Christmas present for a 9-month-old and 30-month-old at the time they loved it. 18 months on and it still gets some use. The boys still play with it, when we let them. The songs and rhymes are easy to learn and it’s upbeat and fun. They’ve both danced and played with it lots over the past year or so. My eldest decided to draw a new face with felt tip pens, which happily I was able to write off.
“There’s multiple modes, and thankfully sound levels. It’s bright, colourful and fun. When Beatbo dances there’s a servo / robotic noise which was unexpected at purchase, but it again is kind of fun. My boy’s favourite mode is the record feature. You push the red button, Beatbo gives instructions and you have a few seconds to record something. That recording is then sped up and the pitch alerted, which can make for funny playback loops.
“Great present, despite the earworms. I’d certainly recommend and buy again.”

Your tot is going to adore this toy shop from Waitrose & Partners which will not only spark their imagination play but make them feel grown up with the ‘real’ shop appeal. Once they’ve finished with the shopping, they can go through the checkout, use the calculator to figure out exactly how much they’ve spent, swipe the credit card, enter their PIN and pop it all in the paper bags when they’re done! We think this little shop is great value for money and will provide hours of fun role-play and development.

Review: “My two and a half year old loves this. The little calculator and credit card for her till are excellent and she loves the paper bag to put the things she has sold in. Great to start thinking about role play and money etc too. Thoroughly recommend and a reasonable price compared to other little shops.”

Children can now perform real magic and create their own magical pet with brand new, Magic Mixies from Moose Toys. The Magic Mixies Cauldron comes with all the magical ingredients needed to make a cute furry friend! Children can find the spell from the Spell Book, then add magical ingredients such as a Glitter star, Crystal Gem, and Magic Feather to the potion one step at a time to help bring their friendly creature to life.

With over 50 sounds and reactions, Magic Mixies react to touch and respond to the wand. Plus, the more Magic Mixies are nurtured and cared for, the stronger their energy levels become. Magic Mixies also love to perform spells alongside the child magician, and may even grant a wish as their gem lights up. Available in pink and blue, there are two species of Mixie to magically reveal. Once the Magic Mixie is revealed, it can be put back into the Cauldron and the magical reveal can be repeated again and again.

Real Mum tester Sarah and her two sons George, seven, and Oliver, five, said: “On the first attempt Mixie surprised us and appeared early and we were a little disappointed that they had not been able to add all of the parts to the potion. But the following day we tried again and successfully completed all of the parts before Mixie appeared.
The more attention you give Magic Mixie, by stroking her head the gem lights up and it responds by making noises. You can tap Mixie gem with the wand three times and then tell it your wish. If the gem turns green the wish is granted or if it turns red the wish is denied. Both Oliver and George would give it 10/10 and definitely love it as a Christmas present. Pixie Mixie has not left Oliver’s side, much to George’s disgust! Mixie has come out to lunch, shopping and slept in Oliver’s bed!”

Grab this amazing reversible table for just £49.99! Children will love playing with the train set and toys on top of the table and you will love how easy and tidy it is to store toys underneath. It’s also a great way to strengthen your tot’s hand-eye coordination. The 100-piece wooden train set features two different road scenes, and you can personalise it too for that extra special Christmas touch.

Review: “Bought this for my great-grandson and he absolutely loves it! Hours of play, keeps him happy (and quiet) all day.”

Wonderbly Personalised I Love You This Much Book

Create a book for up to four children, to show your little one just how much you love them in every moment of every day. A beautiful personalised picture book for you to read together as a family, it’s written in rhyme and will be something your youngster will treasure for years to come.

Review: “The most heart-warming book!”

This adorable dinosaur makes a lovely gift for any toddler and dino-mad adult! The huggably soft dinosaur will be their adorable new Christmas companion and you can even personalise the dino’s tummy with the name of your little one with a choice of font and colours. Safety tested, the removable filling means this toy can double up as a PJ case or ‘special hiding place’ for a young child – no make sure they don’t hide any Christmas biccies in there!

If a dinosaur wouldn’t be your first choice, there’s a cute giraffe to choose instead.

Review: “Gorgeous!! Bought the dinosaur for my nephew’s birthday and he absolutely loves it. Very good value for money, would highly recommend.”

These brilliant Peppa Pots are designed to encourage children to plant ‘easy-to-grow’ seeds as well as nurture their plants while having fun playing with Peppa Pig characters they know and love. There are several different characters to collect including Peppa, George, Suzy Sheep, and Rebecca Rabbit. You can also make a street with the other Peppa Pig Grow & Play playsets by attaching the fence from one set to the house of another.

Review: “Purchased as a present. Had one very happy 3 year old. Have to have soil but he has loved interacting with this and was a great buy.”

Available in blue or pink, this scooter is the perfect Christmas present for your growing toddler as a gift that’ll last for years and grow with them. Suitable for children aged one to five years, it can adapt from a ride-on scooter with a height-adjustable seat, to a toddler scooter with a thinner ‘O’-shaped handlebar for greater control, and then into the award-winning Mini Micro scooter when they have the confidence and balance to scoot like a champ.

Review: “Bought x4 of these as they’re so good. Last for many years and feel sturdy. Ideal for growing up – sit on seat when young and as the child grows the seat can easily be swapped with full-length handle. Grandkids (3 & 2) and nephew & niece (4 & 3) all love them and play on them a-plenty. Highly recommended product.”

What to read next

The best toys for 2-year-olds in the UK

The best toys for a three-year-old

The best baby and toddler advent calendars that aren’t chocolate