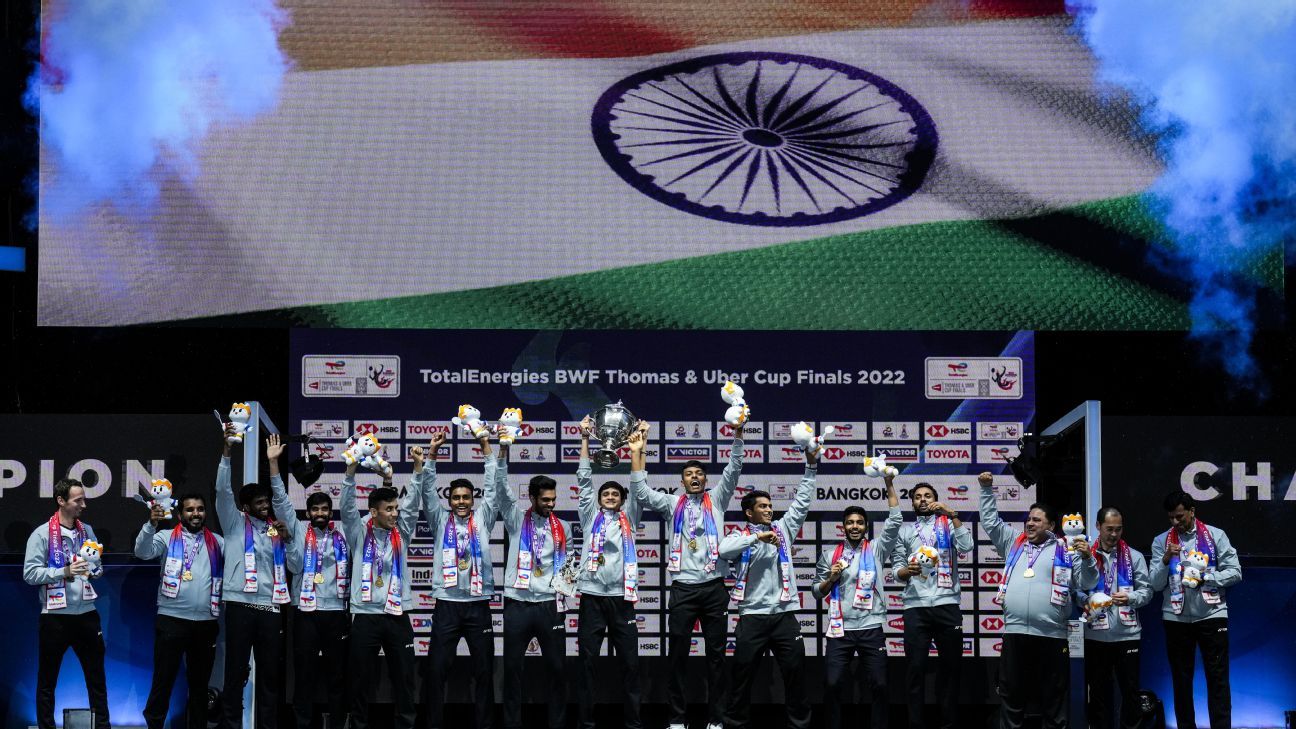 At the trophy presentation, India’s historic first-ever Thomas Cup was lifted by a debutant, Priyanshu Rajawat. The 20-year-old, in the squad as (sole) winner of the selection trials, has played (and won) just one match in the week. In a team that has top singles players in Lakshya Sen, Kidmabi Srikanth and HS Prannoy, the fourth singles player was a back-up at best. But that he lifted the trophy is one of the many, many small moments that makes Team India stand out in the week that will change the face of men’s badminton in India.

This Thomas Cup victory was long-awaited dream but by no means expected. A lot of different moving parts, including some portion of luck, had to fall in place for it to become possible.

Cut to about a year back and the health of Indian men’s badminton didn’t look so sharp: Neither Srikanth nor Prannoy qualified for the Tokyo Olympics, with B Sai Praneeth and Satwiksairaj Rankireddy-Chirag Shetty the only ones in Tokyo other than PV Sindhu. Then, there were two Indians on the world championship podium in Srikanth and Kidambi. In the first quarter of this year, 20-year-old Lakshya Sen went on a brilliant run that catapulted him into the top 10. This set the foundation for this win by Team India, as the team fed off each other’s success and made history.

The resilience of Lakshya Sen

He had lost the three matches he played against higher ranked opponents at Thomas Cup. He had lost the opening game of the final 8-21 against Anthony Ginting. He had suffered a bout of food poisoning before the tournament. Things were not going the way of Lakshya Sen, who had come into the tournament on the back of wins against Viktor Axelsen, Lee Jii Zia, Loh Kean Yew and even Ginting earlier this year. In the final, he trailed 7-11 in the deciding third game.

It would not have been the end of the world had he lost. Indeed, in the format that pitches your top ranked players upfront, the first fixture can often be a write-off in the knockouts because most are so evenly matched. In the quarters and semis, India had sealed the tie in the fifth and final match (after losing the first).

But the new India No 1 displayed a mentality as resilient as his retrievals in intense rallies. After his All England runner-up finish, his father DK Sen had recalled how a young Lakshya would give into tears in defeat before he learned how to manage his emotions better. The older Lakshya has channelled these tears into tenacity now. This is what helped him withstand, defend and then return accurately against Ginting’s speed, eventually the outpacing the reigning Olympic bronze medallist to win the opening tie.

The experience of Satwik-Chirag

For India to win any of the three knockout matches they played in Bangkok, the key was the middle. The second tie (doubles) and third (singles) would have to go India’s way for them to negate the first fixture. This is where India had a big advantage; Satwik-Chirag are young and often erratic, but they are a fast-rising pair, with lots of experience on the big stage. Both Denmark (by choice) and Indonesia (due to injury), meanwhile, didn’t have pairs who played together regularly.

Satwik-Chirag, expertly coached by Denmark’s Mathias Boe (recently returned to fold), leveraged this advantage and won all three matches in the knockouts. In the final, against a mix of the top 2 best doubles teams in the world, their chemistry proved to be vital against veterans. They too lost the first game, and almost the match, when they had to fend off four match points against two of the greatest doubles players of all time in Muhammed Ahsan and Kevin Sanjaya Sukamuljo. But the Indians moved as one, carved out spaces, found spots on court that the Daddy-Minion pair left uncovered, and more than once found even the bodies of their opponents to score points. Rankireddy’s hard-hitting and Shetty’s attacking combined with a fearless irreverence and fiery drive saw match points saved, game points converted, match won.

Such was the energy that even the post-match celebration felt like an extension of the on-court aggro, complete with jersey ripping!

The composure of Kidambi Srikanth

Kidambi Srikanth is a lot of things. Former world No 1, the first Indian world championship runner up, only the fourth player ever to win four Super Series titles in a year, one of India’s best badminton players. But what he isn’t often is, though, is consistent.

Often he has been the player to open the tie for India at Thomas Cup as the No 1. Now, he was playing the crucial second singles – bang in the middle of the tie, make or break. It was the kind of high-pressure situation where his composure has often slipped in the past. But when it came to the moment of reckoning, Srikanth won all six of his matches.

In the semis against Anders Antonsen and the final against Jonatan Christie, there were those nervy moments we’ve become accustomed to. But the seasoned player kept calm and carried on, combining his hard jump smashes and soft net touches to wrest back the momentum. He lost the second game against the Dane and faced game points in the second game against the Indonesian, but he did not lose his composure. He called the final win one the biggest of his career and it is indeed, given all the heartbreak he has endured at big events.

The belief of HS Prannoy

In an ideal world, Prannoy would want his services to not be needed in a tie, like in the final. Playing the fifth and decisive match at a championship is nerve-wracking, he did it twice in two days. The fourth tie was always a disadvantage with inexperienced doubles pairs, but with Prannoy, the fifth was a virtual sure shot.

He may be the third highest ranked player in the side, but this was a top-tier advantage. He has regularly punched above his weight, when fully fit and fired on. He has beaten the legendary Lin Dan twice. It was the belief in this quality of Prannoy that convinced the Badminton Association of India to give him a reprieve from the trials despite his rank of 23. He was the only player to get this bye, which enabled him to focus on resting his body and recovering from an injury.

It proved to be a masterstroke as he stepped up to take India to 1) a first-ever medal and 2) a first-ever final. His work in the fag end ensured that he was not even needed in the final. The historic final run was enough to spur on a 3-0 win when the moment arrived.

The strength of the collective

Priyanshu lifting the trophy was one of the indications that the Indian squad in Bangkok was more than merely a collection of good individual players, they were a team in the true sense of the word – a rare thing in a sport that is predominantly played solo. For close to 350 days in a year, these players are fighting alone on the tour. They share rooms and stories often on the road, the doubles pair even the court. But a team is different. Both Vimal Kumar and Pullela Gopichand compared it to the cricket World Cup.

India has had a world champion and three Olympic medals, All England wins and even Uber Cup bronze in the past. But winning a team championship needs more: more planning, more responsibility, more time and work in the background. Winning it 3-0 against the most successful team needs a special kind of bonding, as much as bench strength. This was truly a win for ‘Team’ India.