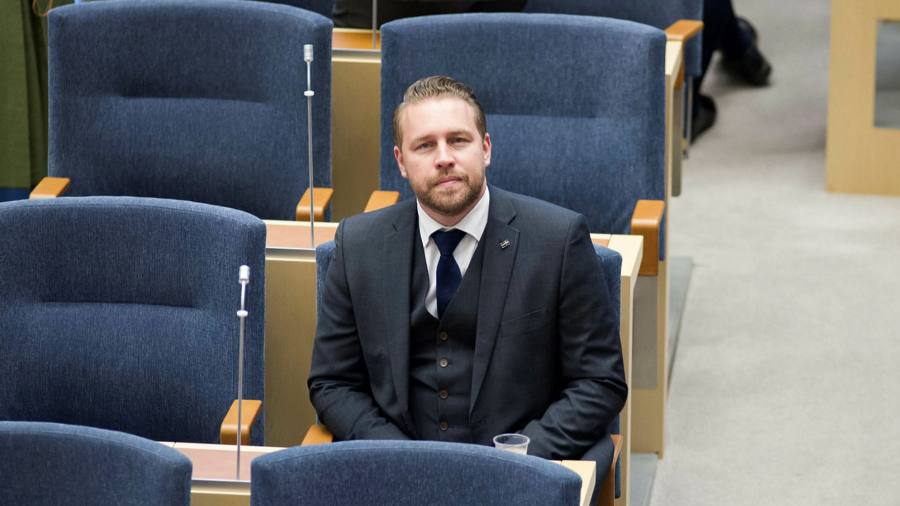 Sweden’s populist anti-immigration party is talking openly about ways to join or support a potential conservative government and end a decade of political ostracism.

The moves by the Sweden Democrats to create a nascent conservative bloc with two mainstream centre-right parties are changing the balance in the country’s politics. They come as the rival Social Democrats try to stay in power under new leader Magdalena Andersson, who would be Sweden’s first female prime minister.

Stefan Lofven resigned this month as prime minister and party leader after losing a parliamentary vote of no confidence.

Long shunned by all other political groups owing to their roots in the neo-Nazi movement, the Sweden Democrats have been brought in from the cold by the centre-right parties as their long-time focus on immigration and law and order has come to dominate the political agenda. Sweden has become a European hotspot for shootings and bombings as part of a gang crime wave.

The Sweden Democrats first entered parliament in 2010 and scored 17.5 per cent in the last elections in 2018, making them the third-largest party.

As the country’s political turmoil has increased they have come closer to their goal of forming a conservative bloc, first teaming up with centre-right parties for a joint immigration policy.

This month, for the first time, they have put forward a joint budget proposal with the two largest centre-right parties, the Moderates and Christian Democrats. Together with another centre-right group, the four parties are one seat short of a majority in parliament.

Mattias Karlsson, the Sweden Democrats’ former acting leader and its chief ideologue, told the Financial Times that the party was “quite pragmatic” about gaining influence for its main issues of “national identity, safety, and immigration”.

“What really matters is what we can get in terms of political content. If we feel we could change society more by being in government we will probably do so. If we believe we could get more by being outside and influencing each budget, then we would. It’s not a goal either way,” he added.

The joint budget agreement “is another step on the load to normalisation of the Sweden Democrats in party politics. It’s easy to forget how controversial they once were,” said Nichola Aylott, associate professor at Sodertorn University. “Eleven years ago, when the Sweden Democrats first got into parliament, they were utterly ostracised, on both political and personal levels.”

Karlsson said the political alignment with the centre-right was “greater than ever” and that the three parties “can talk openly about any topic now”.

The Moderates, the largest opposition party led by Ulf Kristerson, have said they would prefer to govern with other centre-right groups and not have the Sweden Democrats in government.

But the Centre party, one of four nominally centre-right groups, has backed both Lofven and Andersson, leaving the Moderates with little choice other than to cosy up to the Sweden Democrats.

Lofven was the first Swedish head of government to lose a no-confidence vote. Andersson is now locked in talks with the ex-Communists of the Left party in an attempt to become prime minister, possibly as soon as this week, and pass next year’s budget.

Karlsson said he expected the Social Democrats to take a tougher line on crime and immigration under Andersson ahead of elections scheduled for September in an attempt to win back the working class.

“They are going to use this opportunity to go into opposition against themselves. There is going to be a lot of crime rules to try to get part of our voters back. But the interesting thing is: the working party has lost their workers,” he added.

Sweden has become accustomed to bombings and crimes such as a 14-year-old being shot on Saturday in the central town of Eskilstuna. Rapper Einar, linked to several crime figures and kidnapped by a fellow musician, was recently shot dead in what police described as an execution-like killing.

Karlsson blamed the Social Democrats mostly and the Moderates, in power from 2006-14, for what he called Sweden’s “loss of innocence”. He added: “We have accepted more immigrants than we could integrate and in its place an American-inspired gangster culture has taken root.”

He said the left preferred to talk about “more teachers, more social workers, and planting more flowers” but while there was eventually room for that the priority would be to crack down on the gangs.

“As long as the gangs are still there threatening the social fabric of these areas, you have to go in really hard against them and remove them. And then you go in with social measures,” he added.