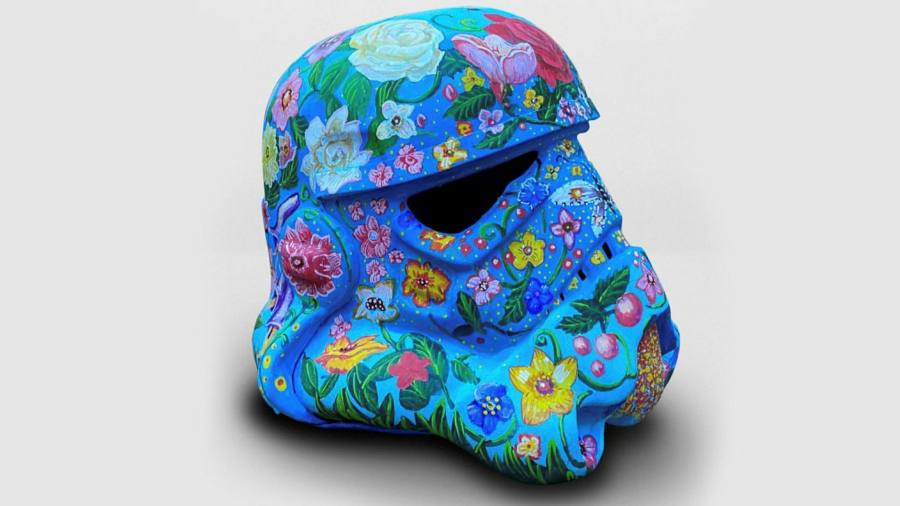 Several artists, including some well-known names, are considering legal action against the London-based curator and artist, Ben Moore. They say that Moore created a Non-Fungible Token (NFT) collection attached to their works without owning their copyright or a licence to create additional works from their original designs. The “Art Wars” collection is an online project of 1,138 NFTs including about 100 made from photographs of Stormtrooper helmets. These were originally designed by artists such as Anish Kapoor and Jake & Dinos Chapman for a separate, charitable project that had a showing at London’s Saatchi Gallery in 2013.

Since November 6, sales from the NFT collection have made more than 1,600 ETH (about £5m) on the OpenSea platform, according to Jon Sharples, an associate at Canvas Art Law, who is representing a number of the artists.

“In the short term, it doesn’t work to say that NFTs represent some sort of grey area in which the existing rules don’t apply. This is the first episode involving a number of high-profile artists from the contemporary art world having their work attached to NFTs without their permission,” Sharples says.

Ben Moore says he “regrets that some of the artists were taken by surprise” by the online launch and that he has since removed works at their requests. All participating artists are due to receive royalties on relevant sales, he adds. Of the past few weeks, he says, “It’s been like delving into a world I’ve never been part of before. The NFT and crypto universe is a different landscape.” At the time of writing, the whole Art Wars collection had been delisted from OpenSea.

This month’s megawatt auctions in New York put the total public sales of 2021 on track to nearly double on last year’s hampered results, finds Christine Bourron, chief executive of the art market analytics firm, Pi-eX. Sales from Sotheby’s, Christie’s and Phillips are currently running at $10.8bn for the year to date, compared with $5.8bn for the same period last year, Bourron finds. Single-owner collections, notably November’s offerings from the divorced Macklowes at Sotheby’s and the works from the late Texas oilman Edwin Cox at Christie’s, have proved dominant as sellers who sat on their hands in 2020 pulled the trigger this year. A separate report by ArtTactic finds that single-owner sales have accounted for a record 20 per cent ($2.2bn) of auction value so far this year, with the Macklowe and Cox auctions taking $1bn.

The number of lots has reduced considerably since 2007, Pi-eX finds, as auction houses chase the trophy items at all costs. Todd Levin, the New York art adviser, says that “Macklowe threw a turbo-charge into this season, and there’s more to come in May. For now, there’s still a tremendous amount of net worth bottlenecked into a relatively small number of people who are looking at art as an asset to buy, hold and be involved with.”

The disgraced art dealer Inigo Philbrick, who was arrested as a fugitive on the South Pacific island of Vanuatu in June 2020, has pleaded guilty to defrauding buyers and investors of more than $86m. His multiyear, “material misrepresentations” included forged contracts, one of which named a stolen identity as the seller of a work, according to the United States Attorney’s Office. Philbrick’s fraud took in paintings by Jean-Michel Basquiat, Christopher Wool and Rudolf Stingel, its statement says.

Philbrick faces a maximum 20 years imprisonment when he is sentenced next year but his lawyer, Jeffrey Lichtman, says he is “hopeful that Inigo receives a lesser sentence.” Of his client, Lichtman says he “has a long way to go to regain the trust of those around him but he is very sincere in his remorse . . . He recognises that his conduct was foolish, immature, but most importantly — criminal. He’ll spend the rest of his life paying back his victims and becoming a productive member of society.”

Frieze has appointed Christine Messineo to run its US fairs in Los Angeles and New York, replacing Rebecca Ann Siegel, who left in July 2021. Messineo has worked in galleries in both locations — as a partner at Bortolami Gallery in Manhattan and as a director at Hannah Hoffman gallery in LA. Most recently, Messineo founded the high-profile Plan Your Vote initiative, alongside Vote.org, to encourage participation in the 2020 general election in the US through galvanising works of art. She starts officially next week when she will join Frieze’s recently appointed Seoul fair director, Patrick Lee, in visiting the Art Basel Miami fair (December 2-4). Art Basel itself has yet to find a replacement for its Americas director, Noah Horowitz, who also left this summer. A spokesperson says that “Art Basel is actively recruiting a new Director Americas; this is an ongoing process and details will be announced in due course.”

As the push to persuade the public to get jabbed against Covid-19 intensifies, MacDougall’s — a specialist auctioneer in Russian art — offers a 1787 letter from Catherine the Great urging for smallpox vaccinations. “Such inoculation should be common everywhere,” she writes to her governor-general Count Piotr Aleksandrovich Rumiantsev, to avoid “great harm.” The empress had first-hand experience of the smallpox — her future husband contracted the virus just before they were married and was permanently disfigured. The letter will be auctioned with a portrait of Catherine II by Dmitry Levitsky, likely painted during her reign (1762-1796), both from the same Russian collection, for between £800,000 and £1.2m at MacDougall’s in London on December 1. Highlights from the sale, including the portrait and letter, are on view at Zubov House in Moscow until November 30.

Sotheby’s London had the sale of the only known painting of an auction room by the beloved British painter L. S. Lowry, which went for £2.1m (£2.6m with fees, est £1.2m-£1.8m) on Tuesday. While life imitated art, much was different since Lowry painted the bustling “The Auction” in 1958. There were no prams or high-stacked paintings in the slick 2021 saleroom, where most of the buzz was via the telephone or online. The work was one of five Lowrys sold at Sotheby’s Modern British & Irish art sale on November 23. This also offered Elisabeth Frink’s “Head” (1967), sold by the fashion designer Mary Quant for a within-estimate £75,000 (£94,500 with fees).