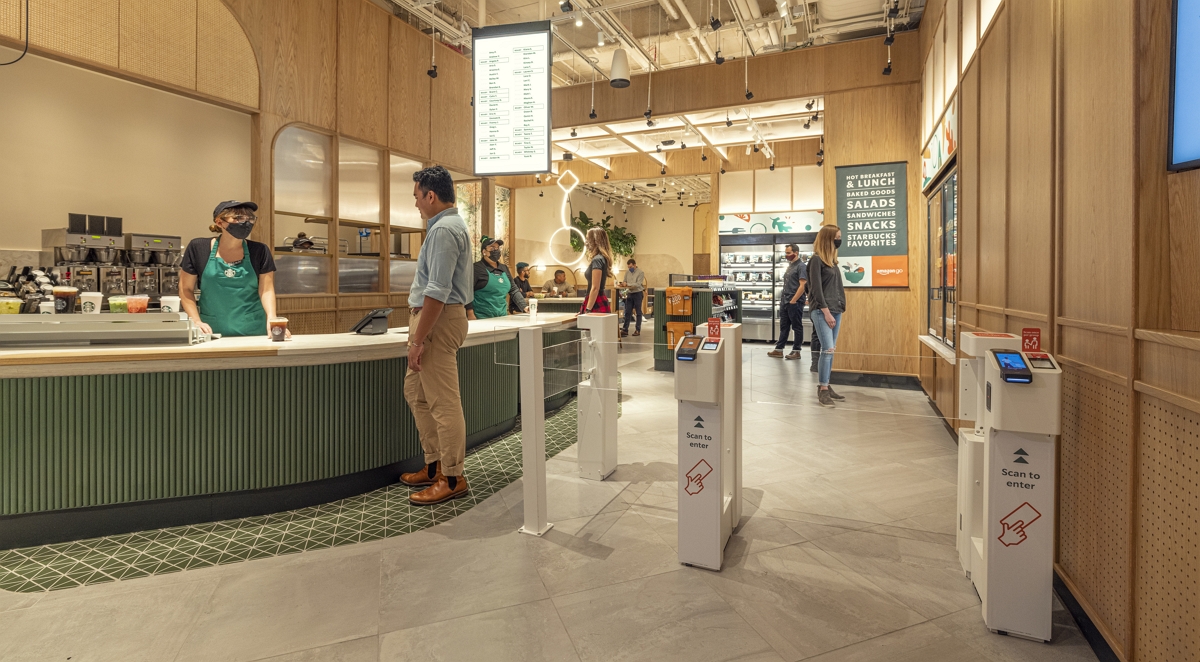 Two of Seattle’s retail icons are collaborating on a store for the first time.

The first “Starbucks Pickup with Amazon Go” will open Thursday in New York City. The space includes a Starbucks counter for picking up mobile orders; an Amazon Go market that uses the company’s “Just Walk Out” cashierless checkout system; and a lounge with individual workspaces, tables, power outlets and USB ports.

Starbucks employees (“partners,” in its lingo) will staff the entire space.

Overall staffing levels will be “very similar” to comparably sized traditional Starbucks locations, said Kathryn Young, Starbucks senior vice president of global growth and development. In addition to working at the pickup counter, employees will replenish the Amazon Go marketplace, and a concierge will greet customers.

Just Walk Out, which debuted in Amazon Go stores in 2018, lets shoppers scan a code or their palm when they walk in, then take items from the shelf and leave without going through a traditional check-out. It uses scales, cameras and sensors to detect which items shoppers take, charging their accounts automatically after they’re done shopping.

The first store was built secretly at a location on 59th Street between Park and Lexington Avenues in Manhattan.

The companies say they are planning a total of at least three Starbucks Pickup with Amazon Go stores in the coming year. Beyond that, they aren’t going into detail about their long-term plans.

The second store is slated to open next year at The New York Times Building at 40th Street and 8th Avenue.

Amazon and Starbucks aren’t disclosing the third U.S. location. In an interview this week, executives from the two companies didn’t tip their hands when GeekWire pointed out that Seattle would be the obvious choice.

The announcement confirms a recent report by news site Insider, which was based on internal Amazon documents indicating that the partnership has been in the works for more than a year. Amazon and Starbucks executives this week declined to confirm those kinds of details about the origins or background of their collaboration.

Since launching the Amazon Go convenience stores, Amazon has expanded the “Just Walk Out” technology into its own full-sized Amazon grocery stores, and some Amazon Fresh and Whole Foods locations.

The partnership with Starbucks is part of Amazon’s broader move to offer the technology for use by other retailers and venues, such as stadiums, airports and convention centers. Others using the technology include Seattle’s Climate Pledge Arena, and Hudson Nonstop at Chicago Midway International Airport.

Young said Starbucks was motivated by customer research showing that convenience improves the human connection in the classic “third place” between home and work. That’s represented by the lounge in the new store.

“The more effortless we make things for customers, the more they’re able to connect,” Young said. “We thought, ‘How do we make the most effortless experience we possibly can, so that people just have a space to be?’ That made us excited about the technology that Amazon has to offer.”