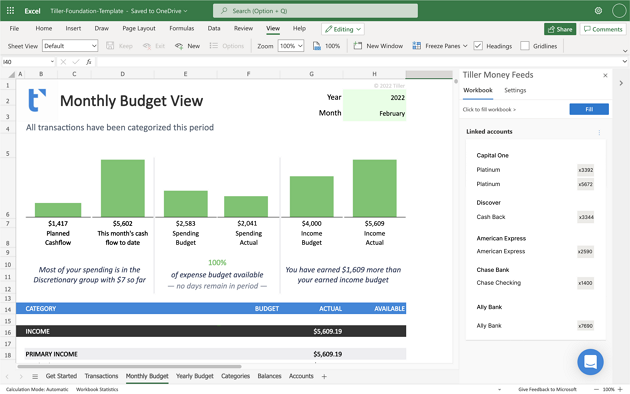 Eight years ago, Seattle-area entrepreneur Peter Polson decided to pursue what he perceived as a gap in the personal finance software market, inspired by his growing family’s increasingly complex needs for tracking its finances, and disappointed by the available options at the time.

Given the tech trends, he initially assumed that would mean a mobile app.

But the data, fittingly, offered a different solution. In their initial user research, Polson and team kept identifying a passionate cohort of spreadsheet fanatics. At first, they saw this group as a lost cause. They’d never get them to switch to a mobile app. Then they realized: these were their people.

The result was Tiller, a subscription service that populates customizable spreadsheets with automated data feeds from banks and other financial institutions — tracking spending, income, investments, and budgets with help from templates and a community of users who share solutions and workflows.

After prioritizing development for Google Sheets initially, Tiller has been ramping up on Microsoft Excel since last year, based on the popularity of what was then its limited Excel solution.

The payoff came with the announcement in May that Microsoft would recommend Tiller to its Microsoft 365 subscribers, offering a 60-day free trial to Tiller, twice the normal length. Tiller costs $79/year after trial.

Microsoft simultaneously announced that it will discontinue its own solution, Money in Excel, a year from now, on June 30, 2023. Money in Excel was introduced in June 2020. Explaining the decision, Microsoft cited its desire to focus on other areas where the company believes it can have a greater impact.

With the announcement, Tiller has seen a surge in Excel users. Previously, most of the company’s subscribers were Google Sheets users, but that has now shifted, with Excel representing a majority of its new customers. Signups have more than doubled since the Microsoft announcement, the company says.

It makes sense, given the size of Microsoft’s user base, with more than 58 million Microsoft 365 Consumer subscribers as of the Redmond company’s most recent earnings report.

Polson sees it as part of a larger trend.

“The spreadsheet, I feel, is in a tremendous renaissance right now,” he said. “The ways that people are using spreadsheets, the extensibility of spreadsheets, is blossoming. There are so many companies building on spreadsheets, and making them more powerful to support all the things we do every day.” 1

Tiller, he said, “is one example of that.”

Officially founded in 2016, the company has 14 employees. Tiller has raised an undisclosed amount of funding from people whom Polson described as “seasoned technology investors,” mostly in the Seattle region. The company has reached a breakeven point and is becoming profitable, Polson said.

The company doesn’t disclose specific subscriber numbers but says it has tens of thousands of customers. It has a 4.7-star average rating on Google Workspace Marketplace based on nearly 50,000 installs.

Tiller comes with a series of security precautions. The company says it never sees the user names and passwords that customers enter at their financial institutions to authorize the automated feeds of financial data that populate the spreadsheets. The company has also been an early adopter of Envestnet | Yodlee’s open banking technology for accessing bank data without sharing user names and passwords.

Tiller’s Microsoft partnership brings Polson full circle. As a college student, he interned as a program manager on Microsoft Money, assigned to build tax features into a new version of the software.

“I always thought that was ironic and funny, because what does a college kid know about taxes?” he recalled. “I knew a little about personal finance, but vanishingly little about taxes.”

An alum of Seattle’s Lakeside School, he graduated from Middlebury College and got an MBA from Dartmouth, working as a JP Morgan Chase technology M&A analyst before going into the wireless industry. He was CEO of Seattle-area mobile phone back-up service Dashwire after its $18.5 million acquisition by HTC in 2013.

He took a fresh look at the personal finance technology market after he and his wife had their second child, and he wanted a more sophisticated tool to manage their family finances. Although the market had shifted to web and mobile technologies in the meantime, led by Intuit Mint, he wanted something with more power and flexibility.

That ultimately led back to the spreadsheet. Tiller says it’s the only service that offers daily automated feeds of finances into Google Sheets and Microsoft Excel.

Polson cited the need for people to pay closer attention to their money to counter “an overwhelming investment in technologies to accelerate spending,” including Amazon 1-click, services for delaying payments, credit card offers, and other tactics. Often, saving money is simply a matter of paying attention to what you’re spending.2

Next on Tiller’s roadmap: bringing its automatic categorization feature, aka “AutoCat,” to the Excel version of its service. This lets users set up rules to categorize different types of transactions. It’s a popular feature in the Google Sheets version of Tiller, and the company says it will be released for Tiller users in Excel this summer.

2 I’ve been trying Tiller using the 60-day free trial for Microsoft 365 users, and so far I’ve found $47/month in various subscriptions for services that we no longer needed, didn’t know we still had, or had otherwise forgotten to cancel.