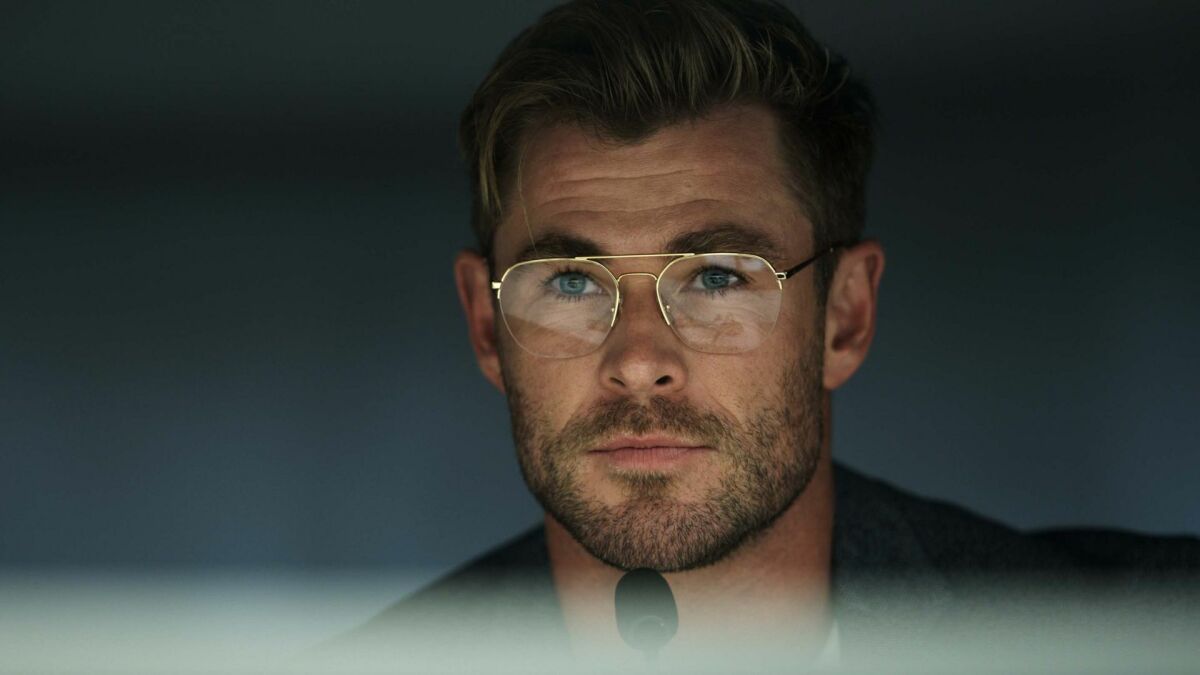 Is that all there is? Sitting in a theater, watching Netflix’s latest original, Spiderhead, I couldn’t help but wonder and wish for — well — more. As its trailers tout, it has a solid pedigree: From Rhett Reese and Paul Wernick, the twisted minds who scripted Deadpool. Directed by Joseph Kosinski, the helmer behind the hit action spectacle Top Gun: Maverick. Headlined by Miles Teller and Chris Hemsworth, two action stars who both have blockbusters hitting this summer (Top Gun: Maverick and Thor: Love and Thunder). And yet, this movie is aggressively fine. It’s as if it’s all algorithm, little else. And maybe that’s enough?

For years now, Netflix has held a paradoxical position in filmmaking. On one hand, its wide catalog has made indie and international titles easier to access than ever before, pushing a slew of studios to launch their own platforms. On the other, this hard lean toward streaming-only content has detractors calling Netflix an enemy to cinema, Yet, Netflix has produced a string of daring, Oscar-nominated dramas from the likes of such esteemed filmmakers as Martin Scorsese (The Irishman), Bong Joon-ho (Okja), Alfonso Cuarón (Roma), and Jane Campion (The Power of the Dog). Then again, they also greenlit a slew of terrible Adam Sandler movies and a Red Notice franchise.

What does it mean to be a Netflix movie?

Playing to audiences worldwide, broad and niche, Netflix tries to have it every which way. So, prestige dramas and gross-out comedies. Yet, there are recurring commonalities across genres: Big names (in front of and often behind the camera), high concept pitches (well-suited to an onscreen logline), and the chance for its talent to experiment (for better or worse). It’s this last bit that might be an even bigger lure for some than the money Netflix notoriously throws about like Party City confetti.

For The Irishman, Scorsese was reportedly given an $159+ million budget to create his dream project, a saga spanning across decades and reuniting his biggest stars…with some wonky de-aging CGI. Okja offered Joon-ho a proper budget to create his titular CGI critter and access to big stars, including Jake Gyllenhaal and Tilda Swinton. Plus, the Netflix platform gave him a venue where audiences worldwide could see his wonderful movie. This is a virtue of the site publicly praised by Ava DuVernay, who has made the historical mini-series When They See Us and the prison system documentary 13th through Netflix.

What does this allowance of daring mean for Spiderhead? Chris Hemsworth plays against type.

Chris Hemsworth is wicked fun as a charismatic mad scientist

Adapted from the George Saunders’ short story “Escape from Spiderhead,” Spiderhead stars Hemsworth as Steve Abnesti, an eccentric scientist who is testing mood-altering drugs on prisoners. Now, as grim as that might sound — or as the research/penitentiary’s “Spiderhead” name suggests — the gig seems pretty cushy at first. The prisoners are on a remote tropical island where the weather is beautiful. They can wear what they want and enjoy fancy snacks, video games, and an open-door policy that allows them to hang out with each other, and even in Abnesti’s penthouse. Steve’s a cool warden…until he’s not.

A pair of metal-framed glasses, scruffy beard, and resort wear give Hemsworth a break from the himbo niche he’s mastered through the Thor movies, Ghostbusters, and Vacation. He’s still hunky, but with a sharp intelligence that glints beneath his gleaming smile. Sure, he’s played a villain before, most thrillingly as a swaggering cult leader in Bad Times at the El Royale. But here, the muscles he’s flexing are his range, convincingly playing a character who is devilishly brilliant and just plain devilish.

The audience’s pre-established endearment may entreat us to trust in Steve, as his prisoners/test subjects do, seduced by that smile, that confidence, that charm. But as we stay longer in Spiderhead, Hemsworth’s performance subtly shifts, with praise turning to passive aggression, warmth twisting to menace, and that smile becoming a threat. If you’re a Hemsworth fan, his performance alone is worth the watching.

Spiderhead is a good idea that runs out of steam

In this prison, Steve has affixed each of his subjects with a pod that injects them with different chemical compounds at the touch of a button — a button he controls. However, before hitting it, he always asks for their consent. (“Acknowledged.”) Except the concept of consent is twisted when it’s between a captor and their captive. As prisoner Jeff (Teller) learns in his Spiderhead stay, this freedom — to wear what you want, eat what you want, fraternize, etc. — is all the illusion of freedom. Because you’re still locked in. Steve may ask for your consent, but if you don’t grant it, he has the power to boot you back to a state penitentiary. Consent here is a lie, so what else is Steve lying about?

To Reese and Wernick’s credit, they have fun building a world within Spiderhead of snarling subjects, bro-ing out sessions, and even a wobbly romance (featuring an underused Jurnee Smollett). However, the story itself is so thin, the audience might begin musing on what comes next. And what it actually is may not be as interesting or shocking as what you imagine. Essentially, this is a Twilight Zone premise with an hour-and-46-minute runtime. If you’re at all familiar with this kind of movie, you’ll probably predict its twists long before they actually hit.

Spiderhead is less an action movie and more a chamber piece

Despite its stars, screenwriters, and director, this film has only a couple of action sequences, involving fleeing or fighting. Mostly, Spiderhead showcases two actors facing off in intense dialogue scenes about ethics and trauma, against a backdrop of minimalist, stony loft spaces. It’s more Windfall than Bird Box, but lacking the bite of either.

Part of the problem is that Spiderhead‘s characters feel theoretical over fleshed-out. Hemsworth, while fun to watch, is practically a cartoon of eyebrow-wiggling villainy. Teller, attempting subdued, hits on snoozy, practically sleepwalking through scenes of torment and romance. Smollett is charming as the love interest, and intense in a pivotal monologue. But her screen time is sparse. The rest of the cast gets even less time and even flatter character development, being reduced to angry tattoo guy, grumbling janitor guy, and bitchy blonde. Such gestures at humanity don’t make for compelling drama.

Joseph Kosinski experiments with comedy in a confounding way

For all its earnest intensity over ethics, trauma, and guilt, Spiderhead brandishes a bizarre sense of humor. As one of the drugs they test is “laffodil,” a chemical that’ll make the user laugh no matter what, perhaps Kosinski’s abrupt tonal shifts were meant to embed audiences into the strangeness of feeling jolly in the face of something horrid.

Maybe this is why sex scenes spurred from a love drug are played for laughs, employing comical orgasm sounds and giddy reaction shots from Steve. Maybe this is why an escape sequence that should be riveting is scored with upbeat music that is not just jarring, but also bleeds tension from the life-or-death stakes on screen. It’s a bold move to undercut your message about the horrors of coerced consent with scenes that make drugged intercourse a joke, to pop on bopping oldies that evoke party vibes and not terror. But this is about as surprising as Spiderhead gets.

Is watchable good enough for Netflix?

Watching Spiderhead, I was reminded of a recent Hollywood Reporter article in which insiders claimed Netflix was shying away from so-called “vanity projects” like The Irishman in favor of safer (read: presumably more profitable) fare. It’s too soon for Spiderhead to be a part of this new reported direction for the company. Yet, it feels like one of their safer bets. Positioned between the releases of Top Gun: Maverick and Thor: Love and Thunder, Spiderhead doesn’t need to be great, or even all that good. It just needs to have Miles Teller and Chris Hemsworth, and be good enough to leave on, even if you’re not really watching.

In a theater, Spiderhead was my sole focus. And there, I was often bored, wishing the plotline would move along already, pondering how the finale might work out. I was never at the edge of my seat, or clutching my pearls, or gripping an aching heart. But I bet if I were folding laundry while watching, I’d have liked it better. I’d have been glad for the simple narrative that doesn’t demand much focus to follow. For the slow start that would allow for me to make a snack and not miss much at all. For the odd sex scenes that spice up an otherwise ponderous plotting. I wouldn’t mind the plotholes or cringing ignorance about how the real-world justice system works (for better and much, much worse). In this at-home viewing scenario, the film’s finale would feel like a fun payoff for my patience instead of a disjointed jaunt following a thread I’d long ago lost interest in.

Simply put, Spiderhead is a totally OK movie to sort of watch. And if that’s all Netflix is aiming for now, they’ve gotten their gold star for mediocrity.