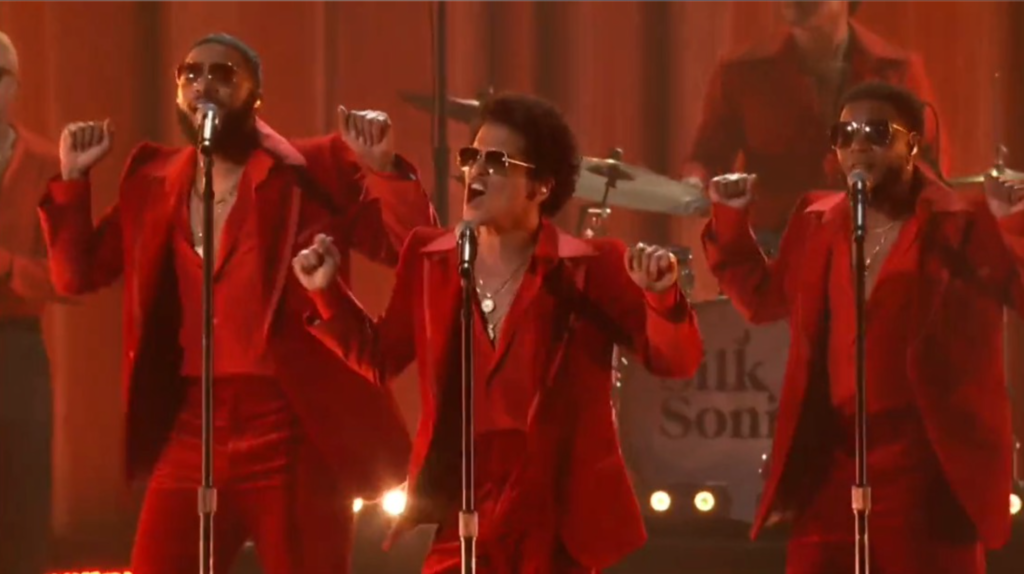 Silk Sonic fans were in for a treat on Sunday night! The popular R&B group opened up the 2021 American Music Awards with a passionate performance of their latest single.

As TheGrio previously reported, Silk Sonic has been one of the biggest musical surprises of the year. After releasing just one song, “Leave the Door Open,” the group consisting of Anderson .Paak and Bruno Mars wound up breaking records and going to No. 1 on music charts worldwide.

After months of anticipation, last week the group finally released their debut album, An Evening With Silk Sonic. The duo took to the AMAs this year to celebrate their release.

Performing their latest single, “Smoking Out the Window,” .Paak and Mars sang in a matching red ensembles along with back-up dancers and singers. With their signature throwback style, the two captivated the audience as they crooned the song. “Smokin Out the Window” has already proved to be another hit for the group, as it debuted last week at No. 8 on the Billboard Hot 100.

Silk Sonic were declared winners before the show even began. The duo won the Favorite R&B Song AMA for “Leave the Door Open,” competing against other acts like Chris Brown, Jazmine Sullivan and Giveon.

As TheGrio previously reported, Mars recently opened up to Apple Music about the creation of their latest single, citing a “hysterical” night between him and .Paak that led to the song.

“On [.Paak’s] birthday, I called him over,” he shared. “He was hysterical that night. After every take he was like, ‘I’m the king of R&B! I’m the best! Tell me I’m not the hottest in the game!’”

He continued, “We were going back and forth with the lines and who can make who laugh, and we end up finishing that song and he was like, ‘I’m out, what we doing tomorrow?’”

Mars also opened up about creating Silk Sonic with .Paak, sharing, “We just wanted it to feel special…instead of trying to get too cute with the concept, it’s like, what’s more special than Anderson .Paak behind a drum set singing a song and me having his back when it’s my turn, you know? And the band moving in the same direction? It was just like a musician’s dream.”

Check out their interview with Apple Music’s Ebro Darden below:

Have you subscribed to theGrio’s podcast “Acting Up”? Download our newest episodes now!
TheGrio is now on Apple TV, Amazon Fire, and Roku. Download theGrio today!