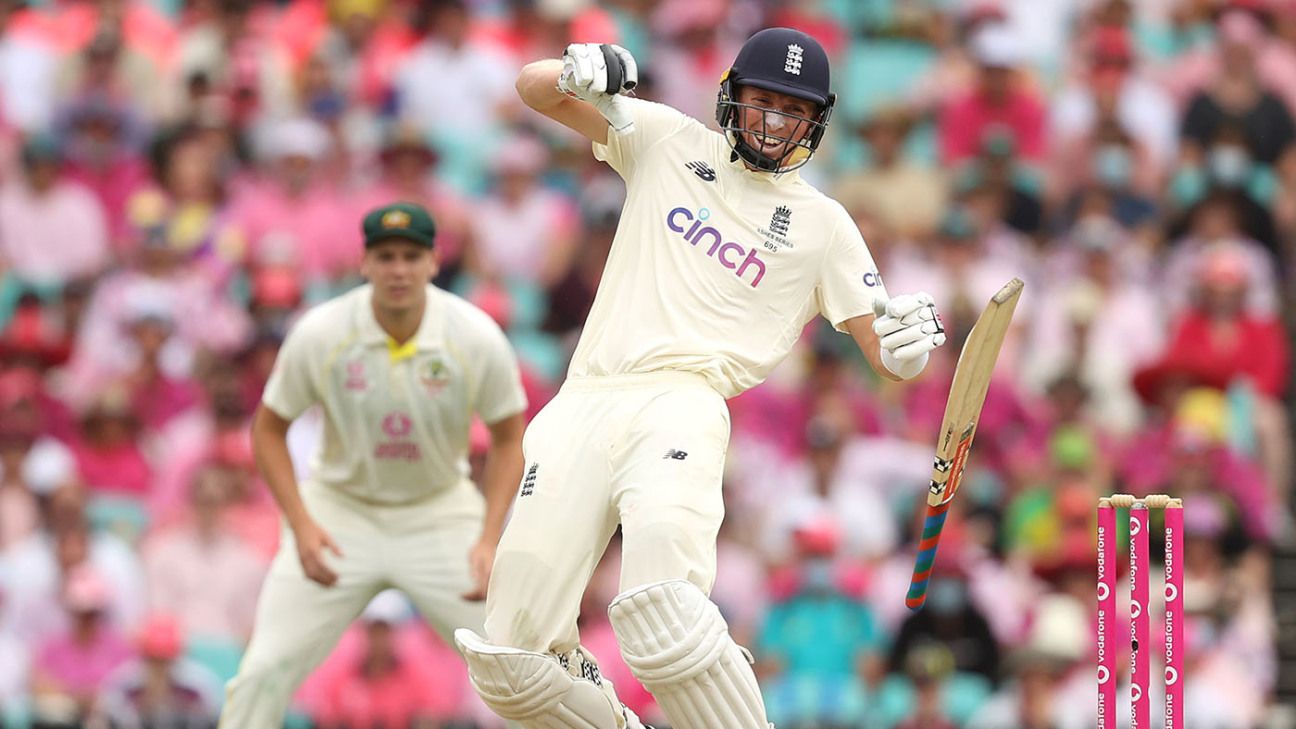 When are England going to score their next run?

That might sound a like a flippant response to their batting woes on this tour, but for a passage of play either side of lunch on the third day at the SCG, it was a genuine question.

The last ball of the 13th over, Dawid Malan clips Pat Cummins to fine leg. It’s a pretty innocuous moment. England are 36 for 1.

The first bowling change of the day comes in the 14th over and Scott Boland, the hero of the MCG, is warmly applauded into the attack. He immediately hits his groove and starts with a maiden.

It becomes a double change as Cameron Green replaces Mitchell Starc who has bowled a superb opening spell, curving one back through Haseeb Hameed’s wild drive having seen him dropped by Alex Carey a few moments before

Green’s second delivery bounces from a good length and beats Malan’s cut shot. He, too, starts with a maiden. It’s three in a row.

Boland beats the edge of Zak Crawley with one that nips away. The next delivery nips back, the one after nibbles away. It’s doing plenty off a pitch playing a few tricks.

Then the last ball of Boland’s second over jags back again, this time it’s right on target and goes between Crawley’s bat and pad. Boland has added to his wicket tally without conceding a run. It’s also four maidens in a row

England are 36 for 2. When will they score their next run?

Three balls into Green’s next over, Malan almost miscues a pull to mid-on. It would have been a horrid way to get out, but quite in keeping with England’s tour. Malan sees out the over. Maiden number five.

Boland challenges Joe Root’s technique as he hammers away in that off-stump corridor. Root angles one into the gully area where Green uses his go-go gadget arms to intercept. No run there.

Malan is relatively secure in seeing out an over from Green. Seven maidens in a row.

The first ball of the 21st over and Root, who towered above all other batters in 2021, slashes at one outside off and the top edge travels very quickly. Steven Smith leaps at second slip and grabs it above his head. Root has collected England’s first duck of 2022. He’s a captain with the weight of the world on his shoulders.

Boland has another Test wicket. His average is now 6.11. His overall figures are 9 for 55.

Ben Stokes, nursing a side strain, makes his way to the middle. Four balls into his innings he is beaten by a delivery from Boland that nips away sharply. A fast off-break. The last ball does the same, but moves even more. Eight maidens in a row

England are 36 for 3. When will they score their next run?

The first ball of Green’s next over leaps at Malan and hammers him on the glove. Three balls later it happens again. Has the pitch gone?

Having shaken off the pain, Malan faces up again. Green is around the wicket, angles the delivery into the body and Malan clips it low to Usman Khawaja who is stationed at leg slip. An hour at the crease, 39 balls and Malan is gone for 3.

It brings lunch. England are 36 for 4. When will they score their next run?

Forty minutes later Stokes walks back down the steps of the visitors’ dressing room with Jonny Bairstow for company.

There is one ball left in Green’s over. It’s actually off target, pushed down the leg side. But it’s another maiden. Nine in a row.

Boland gets the ball again. The first five balls are relatively mundane. Then the final delivery moves devilishly off a length to beat the edge. Ten maidens in a row.

Cummins brings himself back on to replace Green. The second ball is a beauty which skims past Bairstow’s outside edge. He would have done well to edge it. The last ball of the over is short and Bairstow goes for the pull. It is miscued and rebounds towards gully where Green can’t quite reach it with a sprawling dive. Replays show it came off the arm. Eleven maidens in a row.

The question is asked about the record for a scoreless period in Test cricket. It’s 154 deliveries between Peter Nevill and Steve O’Keefe against Sri Lanka in 2016.

Boland strings together four more dot balls against Stokes. And then it happens.

Stokes plays forward to a good-length delivery and it squeezes off a thick outside into the point area, wide enough that the fielder can’t cut it off.

After 70 balls, England have scored a run. The crowd cheers. Not quite as loudly as for Khawaja’s century or Boland’s wickets and there’s no doubt a healthy dose of sarcasm from many.

Twenty-five overs later Stokes and Bairstow walk off together for tea. They have batted out the session, with the help of a sizeable dose of luck when a delivery from Green clips Stokes’ off stump but the bail doesn’t fall. It’s one of England’s best passages of the series, albeit the bar has been set pretty low. In the first over of the resumption they raise the century, only England’s third of the tour, and those 70 balls of struggle are not the only memory of the day.