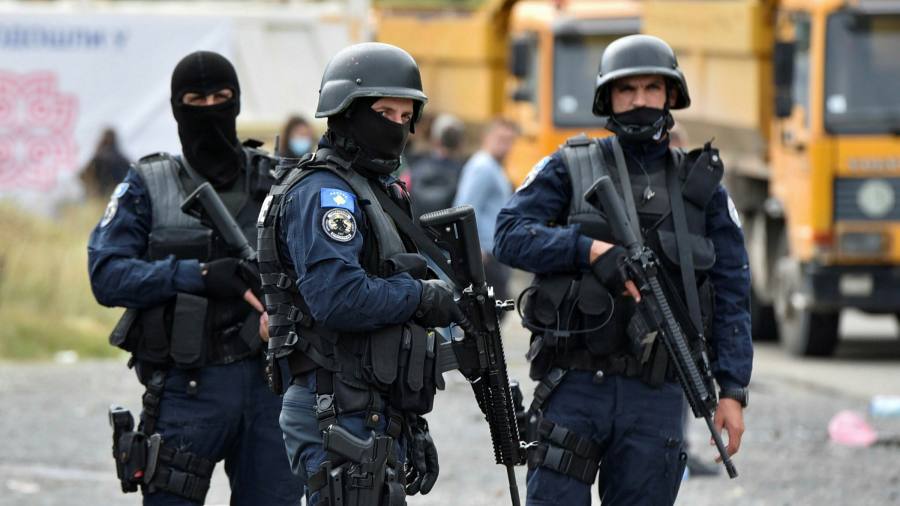 Sign up to myFT Daily Digest to be the first to know about Kosovo news.

Tensions escalated along the disputed Kosovo-Serbia border at the weekend as ethnic Serbs set a government office ablaze and hurled hand grenades at another, in protest over a ban on cars with Serbian licence plates entering Kosovo.

Drivers from Serbia must now use temporary printed registration details valid for 60 days in the neighbouring country.

Serbia’s president Alexander Vucic was quoted by the Associated Press as describing the move as a “criminal action”. Pristina insisted it was merely mirroring longstanding rules imposed by Serbia on Kosovar drivers. But Serbians, who still view Kosovo as a province, were angered that the country announced tit for tat regulation like a fellow sovereign nation.

Kosovo, 90 per cent populated by ethnic Albanians, unilaterally declared independence from Belgrade in 2008, a move that Serbia never recognised. There have been occasional flare-ups between the neighbours ever since and the fraught relationship remains one of the largest stumbling blocks to the two countries joining the EU.

“Our army is not provoking, but it is ready to protect its people,” AP quoted Stefanovic as saying.

The country’s prime minister Albin Kurti said a preliminary investigation showed that the fire at the car registration office in the border town of Zubin Potok had been caused intentionally.

In a post in Twitter he said the perpetrators had been “encouraged and supported by Serbia’s autocratic regime, which is using some Kosova citizens to provoke serious international conflict”.

The EU and the US called for restraint and a quick de-escalation of tensions in the region.

“[It is] time for both Serbia and Kosovo [leaders] to step back and to de-escalate including withdrawal of special police units and barricades and to continue negotiations,” European Council president Charles Michel said on Twitter on Saturday.

Vucic said he was “concerned” about the situation, adding that Serbia’s tolerance was finite.

“The complete occupation by armoured vehicles in the north of Kosovo . . . has been carried out by Pristina for seven days, and everyone in the international community is conspicuously silent,” Vucic said told RTS TV.

“Everyone is suddenly worried when they see Serbian helicopters and planes on the territory of central Serbia, because I guess they shouldn’t exist, or they shouldn’t take off until Kurti or someone from the international community approves it.”

Milos Damnjanovic, head of research at the BIRN consultancy in Belgrade, said the dispute was a storm in a teacup designed to divert attention from more serious political challenges while bolstering Kurti, whose country faces municipal elections this autumn.

“There is no intent to cause violent armed conflict,” Damnjanovic told the Financial Times. “This is just a good opportunity for both sides to play to hardcore audiences at home.”