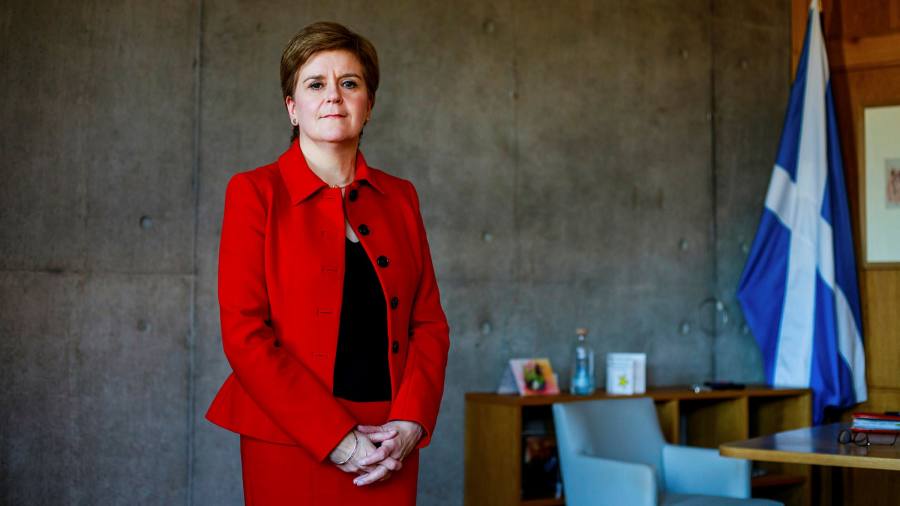 Nicola Sturgeon has warned Boris Johnson’s UK government it would be “unthinkable” to indefinitely deny Scots another say on their constitutional future and that the longer London seeks to delay a second referendum on the issue, the more likely independence will become.

In an interview with the Financial Times, Scotland’s first minister pointed to strong support for independence among younger Scots as showing time was on her side.

“I’ve got democracy on my side . . . if they think it’s about playing a waiting game, I’ve probably got time on my side as well. You look at the demographics of the support for independence — well, I’m not sure that’s going to get you out of this conundrum.”

Foreshadowing her likely campaign strategy, Sturgeon sought to portray staying in a post-Brexit UK as riskier than independence, despite Scotland’s much worse fiscal position compared to when a referendum was held in 2014. The biggest threat to the Scottish economy was a shortage of people, exacerbated by the scrapping of freedom of movement for EU citizens, she said.

“The consequences of not being independent are much, much greater than they arguably were in 2014,” added Sturgeon. “Will it be worth it? Absolutely. We face change and transition now, whatever we do.”

The UK prime minister has said he will refuse to approve another independence referendum, setting the stage for a potential court battle over whether Edinburgh can legally hold one on its own and a likely extended impasse over the future of Scotland’s three century-old union with England.

Sturgeon said she hoped the Covid-19 pandemic would have receded sufficiently by early spring next year for “concrete decisions” on the timing of a rerun of the 2014 referendum, in which Scots voted to stay in the UK by 55 per cent to 45 per cent.

Opinion polls this year suggest support for independence has fallen back from the sustained lead recorded in 2020. But they also suggest substantial majorities of younger Scots back independence: a Panelbase survey in September, for example, found more than 60 per cent of those aged 16 to 34 would vote to leave the UK when undecideds are excluded.

Any move toward independence would have huge implications for the UK and its place in the world: Scotland accounts for about a third of the country’s landmass, 8 per cent of its population, and is home to its submarine-borne nuclear forces.

The SNP won a fourth term in power at elections in May and now through an alliance with the Scottish Greens commands a pro-independence majority in the Edinburgh parliament. Sturgeon insisted a referendum could be held — coronavirus permitting — before the end of 2023, as promised in the SNP’s manifesto.

Whether Sturgeon could win such a referendum remains a big question. The immediate fiscal implications of independence have worsened greatly since the collapse of North Sea oil and gas revenues in 2014, while Brexit means an independent Scotland in the EU would have a trade-impeding hard border with the remaining UK, by far its biggest market.

Sturgeon, who became Scottish first minister in 2014, suggested the most difficult question on independence was the choice of currency. The 51-year-old former lawyer defended the SNP’s policy of initially continuing to use the UK pound — an approach that would deny the new state any control over monetary policy and limit its ability to act as financial sector lender of last resort.

In the interview in her concrete-walled office in the Scottish parliament at Holyrood, Sturgeon promised to be open about the challenges of independence.

Last month she announced her government would restart work on a “detailed prospectus” that would ensure a referendum debate would be “fully informed”.

Opponents of independence say concern about the costs and complexities of leaving the UK would be potent weapons in any referendum. Sturgeon’s strategy is to counter the arguments by highlighting what she says are the higher costs of Brexit.

“We’ve just had freedom of movement taken away from us,” she said. “Immigration rules are tighter. So our ability to bring people into the country is severely constrained and that is going to be an absolute stranglehold on the ability of the Scottish economy to grow.”

But while Sturgeon acknowledged the transition to independence would be “hard work and difficult”, her suggestion that trade friction created by a hard border with England could be eased by digital arrangements echoes the past claims of Brexit campaigners.

Some more impatient members of the SNP complain their leader has not been pushing urgently or strongly enough for a second independence vote.

Sturgeon acknowledged there was frustration at her reluctance to say when legislation for a referendum would be put before the Scottish parliament, while insisting uncertainty about the pandemic meant it was correct to retain “a degree of flexibility”.

“As we come out of this winter into the spring — with, I hope, a lot more certainty about the Covid situation being a bit more in the rear-view mirror — we start to take more concrete decisions around all of this.”

Sturgeon said that while independence could only be achieved through a “legal, recognised constitutional process”, Johnson would eventually have to play ball.

“If you’re saying that there is no legitimate, democratic, constitutional route for Scotland to choose independence, where does that leave us?” she asked. “The union suddenly is no longer what it has always been, a voluntary, consensual union of nations.”

How the constitutional debate develops may depend in large part on whether Sturgeon — who has no obvious SNP heir apparent — is able to retain her high poll ratings.

Her assured near-daily briefings during the coronavirus crisis are widely contrasted favourably with Johnson’s more inconsistent communication. But some even among her political friends say the first minister has appeared weary in recent weeks after what she says has been a “pretty gruelling” period.

The strains of the pandemic have been compounded by the bitter rift between Sturgeon and her predecessor Alex Salmond after two female civil servants in 2018 accused him of sexual harassment during his time as Scotland’s first minister. At a criminal trial last year, Salmond was acquitted of all 13 sexual offence charges against him.

When a parliamentary committee in March concluded Sturgeon had misled it over how she learned about the allegations against Salmond, her political survival appeared in doubt. But she was cleared of breaching the ministerial code and bounced back to lead the SNP to victory in the May elections, while a new party led by Salmond failed to win a single Holyrood seat.

Sturgeon said she had yet to “really process” the lessons of the rift with her former mentor, but made clear she had moved on. “I’ve gone through a range of emotions, from grief, sadness, anger, and I’ve probably got to a stage — which is I think, certainly for me personally, the best stage — where I don’t think about it that much at all,” she added.