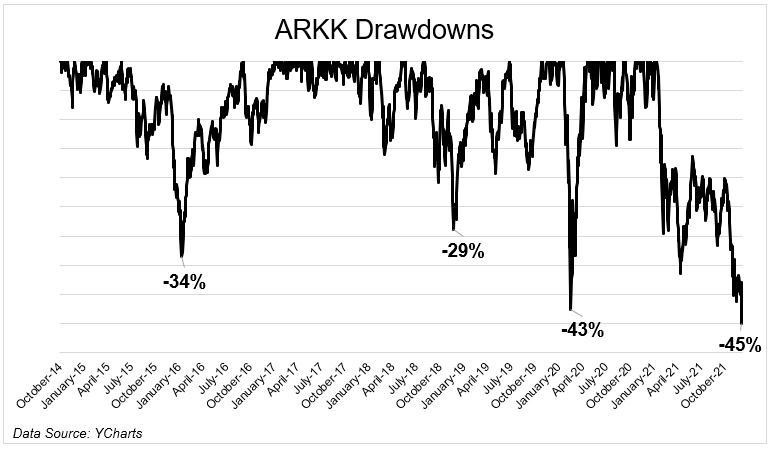 It’s ugly out there.

The Dow Jones Industrial Average might have hit an all-time high today, but growth stocks can’t find a bottom, particularly the high multiple ones. ARKK, the poster child for this group, is down 45% from its highs last February, the largest decline in its history.

The ExxonMobil and Zoom charts perfectly encapsulate investor sentiment over the last year. When the latter went public, the former was 21x the size. And then, for one brief moment during the pandemic, Zoom took the lead. Exxon is now 5.5 larger. Order has been restored to the galaxy.

As these names have sold off, multiples have crashed. The median price to sales ratio peaked in February at 33 (Zoom got up to 120) and is now down to 10.5.

This number is pretty meaningless on its own, so let’s look at it compared to the Nasdaq-100. The large (mostly tech) index is 7.8. A few more weeks (days?) like today and this might flip.

There is a reason why investors were bidding up these growth names. For their growth! The chart below shows that even though revenue growth came down recently, these companies are still growing their top line at a healthy clip.

These stocks are crashing, I think, because easy money is about to get a little less easy. The 10-year treasury closed at the highest levels since April of last year, and markets are anticipating a couple of rate hikes later in the year. Inflation isn’t helping things either. This is of course an after-the-fact justification for what’s been going on for the better part of a year, but you don’t have to be Sherlock Holmes to connect the dots.

Reasonable people can differ about what’s causing the selloff. If you wanted to blame it on crazy multiples coming back down to earth, momentum, or anything else, I wouldn’t argue.

The question is, what does one do about it.

It can be very, very tempting to catch a falling knife. Robinhood is under $14 billion. That isn’t much higher than their series G back in September 2020, which was a $460 million raise at an $11.2 billion pre-money valuation. Yeah, their third-quarter results were disappointing, but they still grew the top line at 35%.

I know neither of these examples I provided are reasons alone to purchase these stocks. I’m only pointing out some ways that investors can talk themselves into buying these stocks.

But the thing is, even real fundamental analysis, as opposed to what I just shared, won’t help you on the way down. You might be proven right eventually, but fundamentals didn’t keep a ceiling on these stocks when they were rising, and fundamentals won’t put a floor on these stocks when they’re falling. When high multiple stocks are being liquidated, it’s best just to stay away. Remember when Zoom went crazy on the way up, it can go crazy on the way down. Nothing is stopping Robinhood from falling to an $8 billion market cap, or Peloton from falling to $6 billion.

Listen, I don’t mean to sound preachy. I’ve tried catching many falling knives. I even tried doing it recently with Robinhood. Twice I might add.* So I get it. But here’s what I want to say, and sorry it took me 600 words to get here; If you try to catch a falling knife, there are rules you need to follow.

If you’re going to put on a full position, whatever that is for you, you have two choices. Either give the position a tight leash, say 10-15%, or whatever you’re comfortable with. Or, give yourself multiple years for this thing to bounce back. Not months. Years. And understand that it might never come back.

Growth stocks crash. That’s what they do. Amazon and Apple and Netflix and go down the list. They’ve all crashed multiple times. If you’re a long-term holder trying to make outsized returns, this is what you sign up for. But if you’re trying to put on a new position while they’re crashing, you have to be careful, because they can always go lower just when you think they can’t possibly go any lower.

*I kept the positions small and sold quickly each time.