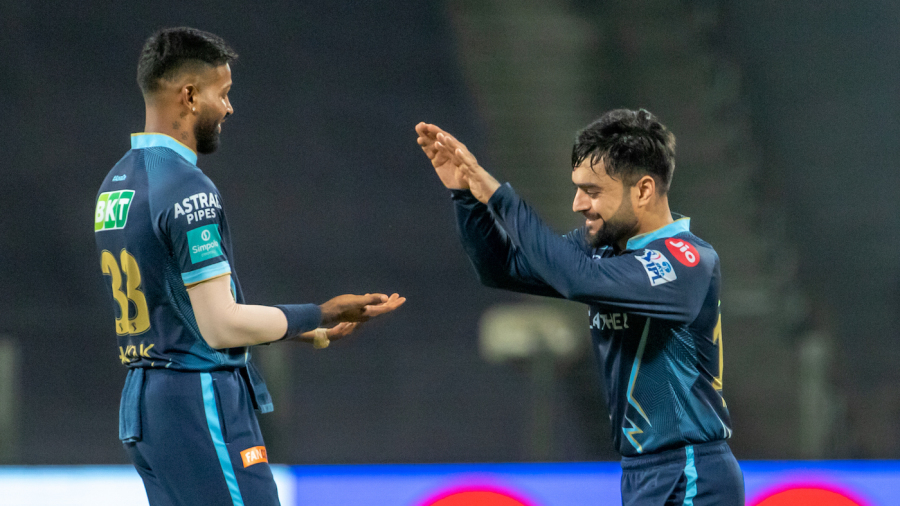 7.10pm Virat Kohli shared this with Harbhajan Singh in a chat on Star Sports: “Jos Butler came to me after the Rajasthan Royals match and said I want to ask you something and I told him, ‘You’re wearing the orange cap, what do you want to ask me? I am not able to make runs.’ And we had a laugh about it.”

RCBfan: “Sad that we don’t get to bat first but glad to see Kaul getting a chance, especially at the cost of Siraj. Both of them deserved this.”

Ibrahim: “Biggest mistake from RCB by dropping Siraj. You can’t expect a rookie to deliver in such a crunch match. Just a senseless decision. I hope it doesn’t backfire completely. ” — Siddarth Kaul made his first-class debut in 2007.

Noor: “RCB had 4 50 run opening partnerships this season. Here is the link“

Here are the XIs:

7.00pm Titans have won the toss and they will bat first. “We have made one change, Lockie comes in place of Alzarri,” Hardik says. “We had a chat with the guys and they all said they want to play.”

“We also wanted to bat,” says Faf. “We have got one change today. Sid [Kaul] comes in for Siraj.”

Sumanth: “Say RCB win by 75 runs, and RR lose by 75 runs, I think that puts RCB just ahead of RR, so I don’t agree that RCB should ignore the NRR equations entirely. RCB won’t get ahead of DC if DC win but if RR loses big, that’s a possibility and a lot of recent games have been very one sided.” — Our stats head S Rajesh tells me the combined margin of victory for the two games should be around 160. So if RCB win by 80 today, RR will have to lose by 80 for RCB to qualify.

6.50pm Graeme Smith says the pitch has got a nice grass covering and is “probably the hardest surface” he has seen at the Wankhede this year. The square boundaries are on the shorter side.

Abir: “Really want Kohli and Faf to start off well and eventually score big because in this year there hasn’t been any good opening partnship. I want kohli to score more because he is playing well when he is at the crease but then gets out. RCB RCB RCB for Life”

Mustafa Moudi: “Virat Kohli’s Only Half-Century (Even if low SR) this season came against the Titans. Can we have a double please ??”

Sanket: “RCB should bat first in this game, it’s better to put runs on the board in the crucial game , though Gujrat has pulled some incredible chases still batting is their relatively weaker side.”

Mohd Irshad: “RCB should not worry about run but to win the game, if DC wins and as they are having really healthy run rate…they will be through…so just get a win and live for another day.” — True that.

Jaison: “The new batter taking strike after a catch has made a lot of difference to many of the outcome of the matches with set batsmen not able to take strike in end overs” — Yes, we saw that last night as well. A couple of months ago, it would been Sunil Narine, and not Umesh Yadav, on strike for the final ball.

If you play fantasy cricket, here are our recommendations for tonight’s game.

Riyaz: “Do you think GT will rest some of their key players to get ready for the next leg or will they go all guns blazing today?” — I don’t think it makes sense to rest any of the players.

Sainath: “So Eventually “Ee Saala Cup Namde” boiled down to this knockout match for RCB!” — Even if they win here, they will need Capitals to lose against Mumbai.

6.40pm Meanwhile, if you are in the USA, you can watch the game live on ESPN+.

Should Royal Challengers worry about their net run rate? (Spoiler: No) Should Titans bring back Lockie Ferguson? Ravi Shastri and Daniel Vettori answer those questions here.

6.30pm Hello and welcome to game 67 of IPL 2022. It’s Royal Challengers Bangalore vs Gujarat Titans at the Wankhede stadium. The equation for Royal Challengers is simple. Win tonight and hope Delhi Capitals lose to Mumbai Indians on Saturday. That’s the only way they can make it to the playoffs.

Titans, meanwhile, are already assured of a top-of-the-table finish. But can they further fine-tune their line-up? All that and more in our preview.