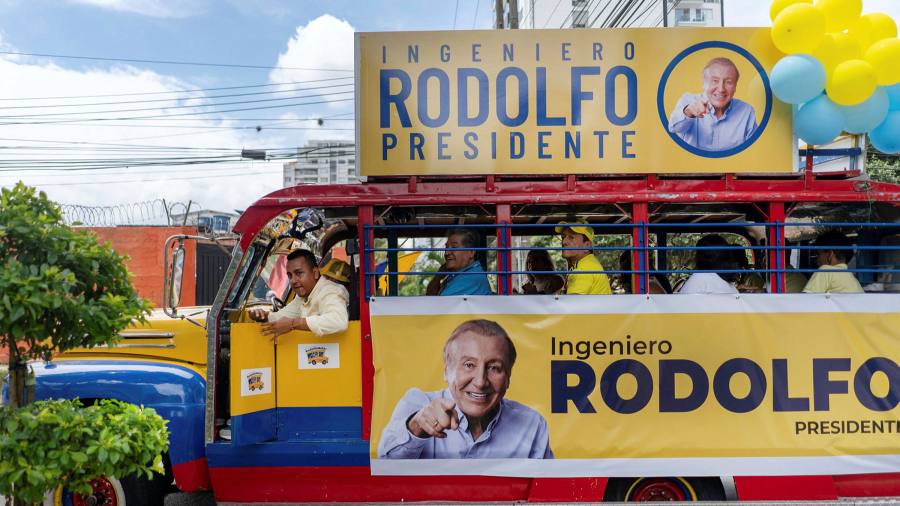 If Rodolfo Hernández succeeds in his unlikely bid to win Colombia’s presidential election on Sunday, he can credit his campaign team’s clever use of social media and fervent support in his home city of Bucaramanga.

A straight-talking populist sometimes compared with Donald Trump, the 77-year-old businessman served as Bucaramanga’s mayor for four years until 2019 and has used that position as a springboard for his presidential bid.

Shunning traditional rallies, he has given few interviews during the campaign and refused to take part in recent presidential debates, preferring instead to communicate via TikTok, Facebook and Twitter.

“Rodolfo Hernández is a not your typical candidate,” Danny Miranda, creative director for Hernández’s campaign, told the Financial Times from inside the elegant two-story house in Bucaramanga that serves as campaign headquarters.

“If you post a video that’s seven, eight, nine minutes long on social media, no one watches it. That’s what people working on traditional political campaigns don’t seem to realise,” he explained.

“Rodolfo’s way of speaking lends itself to social media. His phrases are short, punchy and clear. We’ve been publishing 10 to 13 short communications a day whereas in a normal campaign it would be just three or four.”

The strategy has paid off.

In last month’s first round of voting, Hernández pulled off a surprise by finishing second, earning a place in this weekend’s run-off against Gustavo Petro, a former leftwing guerrilla and mayor of Bogotá.

Both men, in starkly different ways, are anti-establishment candidates. But whoever wins on Sunday is likely to take Colombia — the third most populous country in Latin America — down a radically different path from the one it has followed in recent decades, when it has largely been ruled by leaders from the country’s traditional ruling class.

Nationally, Hernández took just 28 per cent of the vote in the first round. But in Bucaramanga, a city of 500,000 residents nestled in the foothills of the eastern Andes, he won 64 per cent. In the surrounding department of Santander, he took 67 per cent. Nearly one in eight people who voted for him nationally live in Santander.

“We’re all Rodolfistas here,” said Damaris Súarez as she sat on a bench in Bucaramanga’s García Rovira park, a handsome square shaded by palm trees across the road from the mayor’s office.

“In Santander we’re renowned for being blunt, for saying things as they are, for being honest, and Rodolfo is that way too. Some people don’t like it but a lot do.”

Súarez added: “Most people have good memories of his time as mayor. He took on the corrupt politicians that had been in power here for years and he got rid of them. Now we’re hoping he can do the same for the rest of Colombia.”

Across Bucaramanga there are signs of Hernández’s popularity. His face stares out from stickers on car windows while visitors to his headquarters are greeted at the entrance by a life-size cardboard cut-out of him.

Sometimes abrasive or even offensive, Hernández is prone to blunders. In an interview in 2016 he described himself as “a follower of a great German thinker, Adolf Hitler”, only to correct himself later and say he confused Hitler with Albert Einstein.

As mayor, he angered Bucaramanga’s firefighters by lambasting them as “fat and lazy”.

Just last week he said he spoke by phone to “the director of the United Nations” Luis Almagro, who is in fact the head of the Organization of American States. He also apologised to Christians for some colourful and politically incorrect comments about the Virgin Mary.

As mayor, he was twice suspended from office — the first time for slapping a city councillor in an argument about corruption and the second for breaking Colombia’s rules on election campaigning. Neither incident seemed to dent his popularity in Bucaramanga and may even have enhanced it.

His age, wealth and tirades against the political establishment have fuelled the Trump comparisons. Others compare him with Italy’s Silvio Berlusconi, perhaps in reference to his permanent suntan and carefully coiffured comb-over. Still, others say his authoritarian populism and social media use remind them of El Salvador’s Nayib Bukele.

“Rodolfo is very shrewd and very driven by money,” said one Bucaramanga resident who knows Hernández from his time as mayor. “Personally, I wouldn’t say his time as mayor was a great success, it was 50-50. But he’s certainly a great communicator with ordinary people.”

Hernández made his wealth in the construction industry and has used that money to finance his campaign. He has no political party and leads a makeshift movement called the League of Anti-Corruption Governors. If he becomes president, he may struggle to form a working coalition in congress, having berated most of the main parties in it.

His vice-presidential running mate is Marelen Castillo, an educationalist who only took on the role in March. Castillo has no political experience but would become Colombia’s president if Hernández were to die in office.

Also, Hernández, despite running on a strong anti-corruption ticket, faces his own corruption allegations. He is accused of trying to award a contract as mayor that would have benefited his son financially. The case is due to go to trial on July 21, after the election but before the new president takes office.

Sunday’s vote promises to be close. The latest polls suggested Hernández was leading Petro but the gap between the two candidates had narrowed and they were technically tied.

Petro has repeatedly questioned the neutrality of Colombia’s electoral authorities, raising fears that he might challenge the results if he loses, while Hernández has said he trusts the electoral system. “Win or lose, I’ll accept the results without hesitation,” he said.