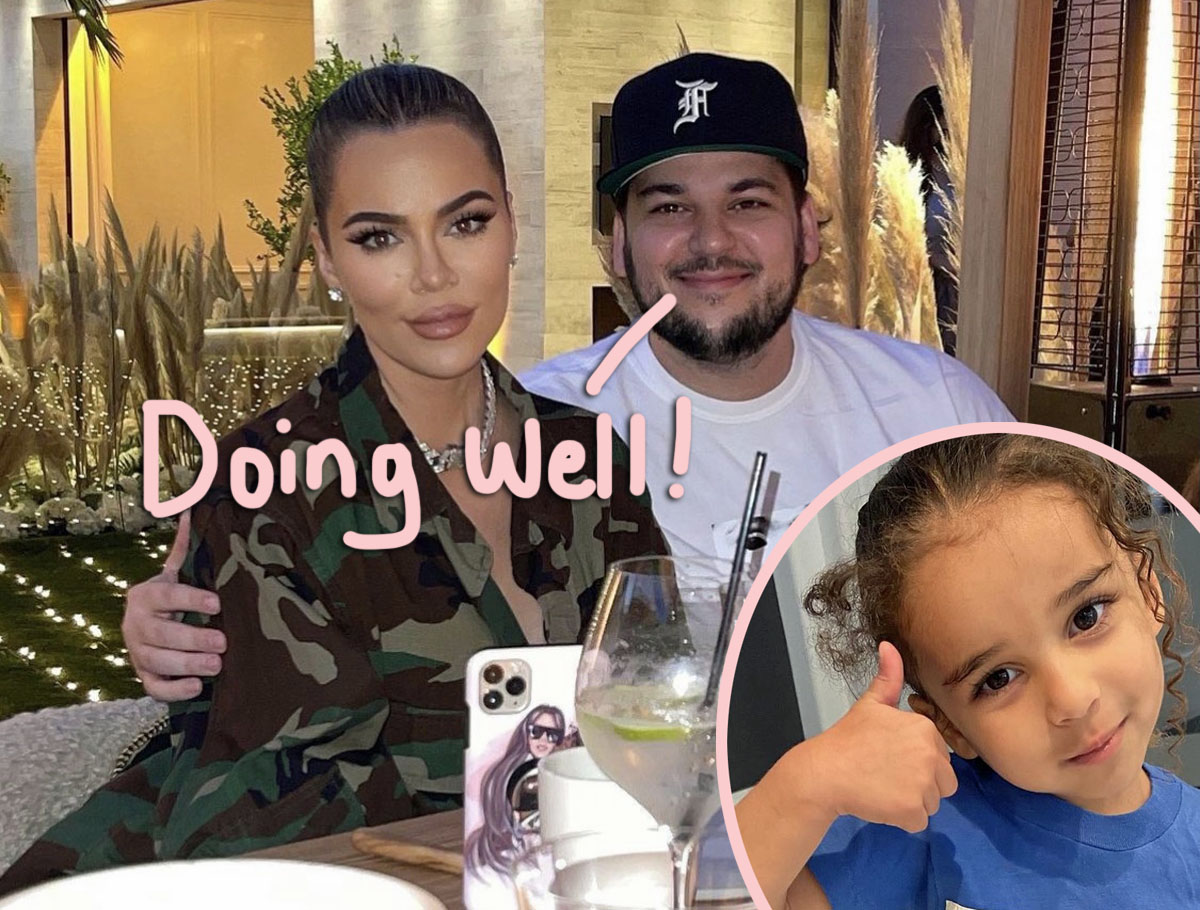 It was so great to see Rob Kardashian looking happy and healthy in a rare photo posted by Kim Kardashian on Tuesday (above).

Naturally, fans have been eager to know how the former reality star is doing these days — and now we’re getting more insight into the private life of the former TV personality!

According to sources who spoke with E! News, Rob is doing better than ever!! They dished:

“Rob is in a really great place. He’s very happy living a low-key life in Calabasas away from the spotlight.”

Love to hear that!! So, now that his mental health has improved, will he be returning to TV seeing that the Kardashian-Jenner family has reportedly begun filming their new Hulu show??

Related: Kylie Jenner Called Out By Customers On TikTok Over Her ‘Terrible’ Swimsuit Line!

Unfortunately for diehard Keeping Up With The Kardashians fans, it doesn’t sound like the dad of Dream Kardashian is planning to make his return anytime soon. The insider explained:

“Rob is not planning to have any participation in the new Hulu show, but he feels he’s in a great headspace right now.”

That said, there’s still a chance he might change his mind and could “consider being on in the future.” Seeing that KUWTK ran for an impressive 20 seasons, he likely has plenty of time to think about making an appearance. And we’re sure viewers would go nuts for his arrival!

Rob was a full-time cast member during the E! show’s first seven seasons. He then made a few appearances until finally exiting the series after Season 13. That decision was the best for him at the time, too, the source continued:

“He truly needed some time away and to himself to get his mindset straight and is now living a very healthy lifestyle.”

The fashion designer, who has been candid about his weight and mental health struggles, committed to “working out a few days a week and eating healthier.” On these lifestyle changes, the insider noted:

“He looks and feels great, and his sisters have motivated and supported him the whole way.”

While staying out of the public eye, the 34-year-old has been pouring this attention onto his 4-year-old daughter, whom he shares with ex Blac Chyna. The co-parents faced a few legal issues about child custody last year, but things have thankfully settled. The source continued:

“He truly spends most of his days with Dream, working out and working on new concepts for business ventures. Dream is his life, and he makes effort to make sure she is around all of the cousins and is in a stable environment.”

Love that!! So great for both of them to have that “stable environment.”

While making sure his little one grows close to her many cousins, Rob has been making an effort to stay close to his siblings as well. Family dinners have become one of the best ways to do that, and the source insisted he’s “enjoying the weekly family dinner nights,” adding:

“They are all really happy he comes around more often. Kris and his sisters are really proud of him and how much he’s grown up.”

Wow! This is great news on all fronts!! It’s so nice to know Rob’s putting in the hard work to live to the fullest with his daughter! Reactions, Perezcious readers? Would U want to see Rob return to TV? Let us know in the comments (below)!