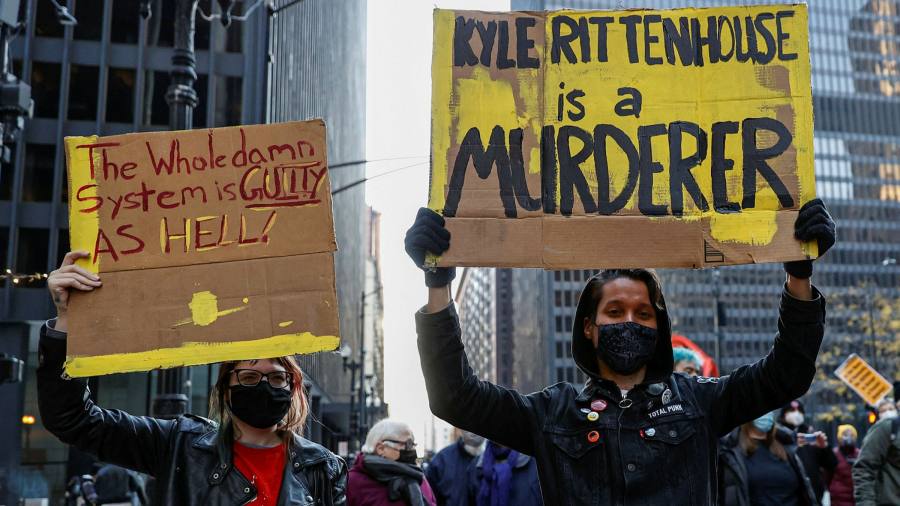 The streets of Kenosha, Wisconsin have been quiet since jurors accepted Kyle Rittenhouse’s argument of self-defence and acquitted the teenager of homicide over two killings during civil unrest last year.

But across the US, the verdict has sparked outrage on the political left and cheering on the right, following a two-week trial that sharply divided public opinion.

The court proceedings have taken place in parallel with an equally explosive trial in Georgia over the shooting death of Ahmaud Arbery, a black man shot dead while jogging, and exposed a fractured country still grappling with matters of race and criminal justice more than a year after George Floyd’s murder.

For the organisers of the Reimagine Kenosha event, who pitched tents on a grassy lot a few blocks from the courthouse, the goal was to “figure out a way to heal”.

“We know our institutions are still sick . . . We’re at a reckoning point, so we need a reimagining,” said organiser Kyle Johnson after the verdict on Friday.

Kenosha resident Jasmine Alvarez described her reaction to Rittenhouse being found not guilty on all five counts as “disappointed, not surprised. And infuriated.”

“He needs to learn the consequences of his actions, and that didn’t
happen,” she said, in a reference to Rittenhouse, who the prosecution described during the trial as an armed “chaos tourist” who travelled to Kenosha “looking for trouble”. The teenager’s lawyers said he acted in self-defence during last summer’s protests against police brutality in the city.

Kendall Needham, another Kenosha resident, insisted the outcome of the shootings in August 2020 would have been different for a black man. Rittenhouse is white.

“There are so many people [in Kenosha] doing time for very minor, harmless offences but some kid from a different city comes to incite
violence and actually takes two peoples’ lives and gets to walk away
scot-free.”

Rittenhouse drove to Kenosha, a city on Lake Michigan, from the neighbouring state of Illinois after a police officer shot Jacob Blake, a black man, leaving him paralysed and setting off days of protests and riots. Rusten Sheskey, the officer who shot Blake, was not charged with a crime.

Rittenhouse testified during his trial that he was there to protect property and offer first aid, saying he carried an assault-style rifle to protect himself. He shot three men, killing two and wounding a third amid confrontations with a crowd.

After Friday’s verdict, Rittenhouse’s supporters drove past the courthouse and honked their car horns in celebration.

Republican lawmakers and conservative commentators have welcomed Rittenhouse’s acquittal, calling the verdict a vindication of Americans’ Second Amendment rights, which allow people to “keep and bear arms”. The judge in the Rittenhouse case dismissed a firearms charge shortly before the trial ended.

“Congratulations to Kyle Rittenhouse for being found innocent of all charges,” former US president Donald Trump said in a statement. “And by the way, if that’s not self-defence, nothing is!”

Matt Gaetz, a Republican congressman from Florida and a Trump ally, said he wanted to offer the teenager an internship. Paul Gosar, a Republican lawmaker from Arizona, who was censured last week by the House of Representatives for posting a video to social media depicting him killing Alexandria Ocasio-Cortez, a fellow member of Congress, said he would “arm-wrestle” Gaetz to hire Rittenhouse. The polarising Fox News host Tucker Carlson is working on a documentary about the teenager.

President Joe Biden said that “while the verdict in Kenosha will leave many Americans feeling angry and concerned, myself included, we must acknowledge that the jury has spoken”. Rittenhouse was depicted as a white supremacist in a Biden campaign video last year.

Vice-president Kamala Harris, a former prosecutor, told reporters that “clearly there’s a lot more work to do” to make the US justice system more equitable.

Lilly Goren, a political science professor at Carroll University in Wisconsin, said that, like the trial of the killers of Arbery, “the undercurrent of racism is very pronounced” in the Rittenhouse case.

She noted the defence lawyer in the Georgia case — in which three white men were involved in the fatal shooting of a black man — complained about black pastors sitting in the courtroom. Reverend Al Sharpton, the civil rights leader, responded by organising a rally of black pastors outside the courthouse last week.

Goren noted that there were never any charges filed against the two police officers who shot and killed Tamir Rice, a black 12-year-old boy playing with a toy gun in a park in Ohio, in another case that captured the nation’s attention.

The Rittenhouse verdict means that at future political protests,
particularly for the Black Lives Matter movement, “there may be more
of this, essentially, white vigilantism”, Goren said.

Tensions in Kenosha had escalated in the run-up to the Rittenhouse verdict, as groups of duelling demonstrators gathered in large numbers. Wisconsin governor Tony Evers authorised 500 National Guard troops to stand by but protests in the city and elsewhere across the US have been mostly peaceful through the weekend.

Widespread unrest that followed the death of George Floyd in Minneapolis last year, which was widely seen to have fomented a discussion about lingering racism in America. Attention has turned to the courthouse in Brunswick, Georgia, where the white defendants in the Arbery case have also claimed self-defence.