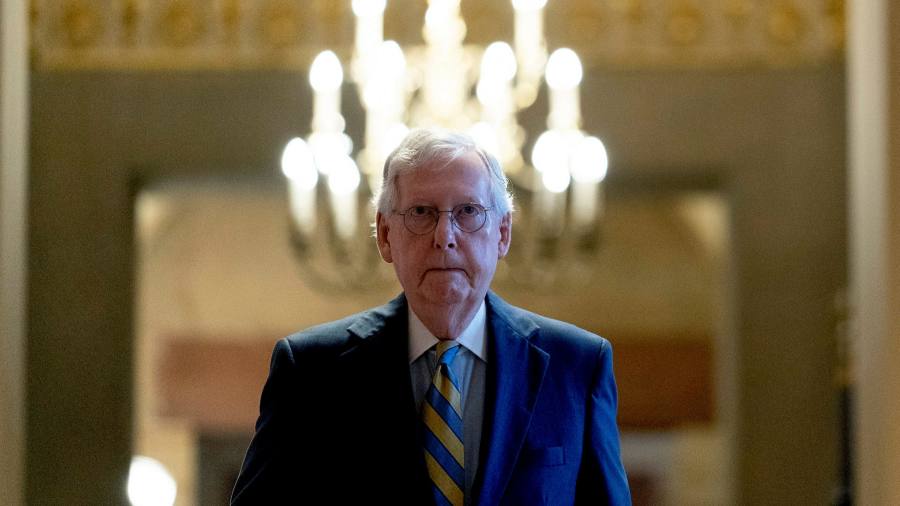 Republicans and Democrats in Congress opened the door to a temporary solution to America’s debt ceiling crisis on Wednesday, saying they would consider a stop-gap measure extending the country’s borrowing limit until December.

The potential breakthrough came after Mitch McConnell, the Senate’s top Republican, offered to support a short-term extension of the nation’s debt limit as one of two options to resolve a stand-off that has spooked investors and corporate America.

While some Democrats on Capitol Hill immediately dismissed the proposal, others expressed some support for such a measure as a way to avert a looming economic and financial calamity and refocus their efforts on passing President Joe Biden’s economic agenda.

Jen Psaki, the White House press secretary, offered a chilly response to McConnell’s proposal, but did not rule out backing it either. “There’s been no formal offer made. A press release is not a formal offer,” she said, adding: “We don’t need to kick the can.”

Chuck Schumer, the Senate’s top Democrat, did not immediately comment. A crucial procedural vote set for Wednesday afternoon on a measure that would raise the debt ceiling and avert a default crisis in just over a week — which Republicans had been expected to block — was postponed.

The developments on Wednesday brought the first signs that members of Congress, and particularly Republicans, were feeling pressure to avoid a potentially damaging and self-inflicted US debt default. Lisa Murkowski, the Republican senator from Alaska, said early in the day that she did not want America to “even come close” to a default, and McConnell’s plan was “going to give us a way out of the woods”.

However, the details of any short-term deal still need to be negotiated, and any agreement would merely postpone the threat to global financial markets and the US economy for a few months.

Earlier on Wednesday, Biden sought corporate America’s help in his attempt to convince Congress to raise the US borrowing limit, holding a virtual meeting with a group of chief executive and business leaders including Jamie Dimon of JPMorgan Chase, Jane Fraser of Citigroup and Brian Moynihan of Bank of America, as well as Greg Hayes from Raytheon and Pat Gelsinger of Intel.

Fraser warned that the US was “playing with fire” in its brush against the debt limit, as she urged Congress and the administration to resolve the crisis as quickly as possible.

Dimon said the consequences of a possible default would range from a “recession” to a “complete catastrophe”, and undermine US credibility around the world. “This is a time I think we should show American competence, not American incompetence,” he said.

Janet Yellen, the US Treasury secretary, also attended the meeting. She has warned that the US risks running out of cash to pay its bills after October 18 without an increase.

Treasury bills that mature just after the October 18 deadline rallied dramatically following the statement from McConnell. The yield on the four-month bill that matures on October 19 fell 0.06 percentage points to 0.06 per cent on Wednesday. Yields decline when a bond’s price rises.

The $4tn market for short-term bills, which the US government relies heavily on for funding, had largely been unscathed by the impasse until late last week. But on Friday investors began to price the risk that an agreement over the debt ceiling would not be brokered in time, raising the risk of a default.

Biden has tried to portray Republican opponents of the debt ceiling increase as playing “Russian roulette” with the US economy and financial markets, raising tensions between the party’s lawmakers and their allies and donors in the business community.

Republican lawmakers have been insisting they will not sign on to raising the debt limit, seeking to tie the effort to Democrats’ ambitious spending plans, including the president’s proposals for a $1.2tn infrastructure bill and a $3.5tn social spending package.

Democrats contend that Republicans are being hypocritical, given they voted to lift or suspend the debt ceiling three times when Donald Trump was president, and most of the government’s current borrowing is needed in order to pay for costs incurred during the previous administration.

Several lawmakers and former officials have warned that a default would have diplomatic implications for the US government. Six former US defence secretaries, including Jim Mattis, who served in the Trump administration, warned in an open letter to congressional leaders on Wednesday that a default would have “catastrophic consequences” for the US military and the country’s “position of leadership in the world”.

The White House’s Council of Economic Advisers warned on Wednesday that without action, it could take “decades” for the US to recover.

“Financial markets would lose faith in the United States, the dollar would weaken, and stocks would fall,” they wrote, adding: “The debt ceiling is not and should not be used as a political football. The consequences are too great.”