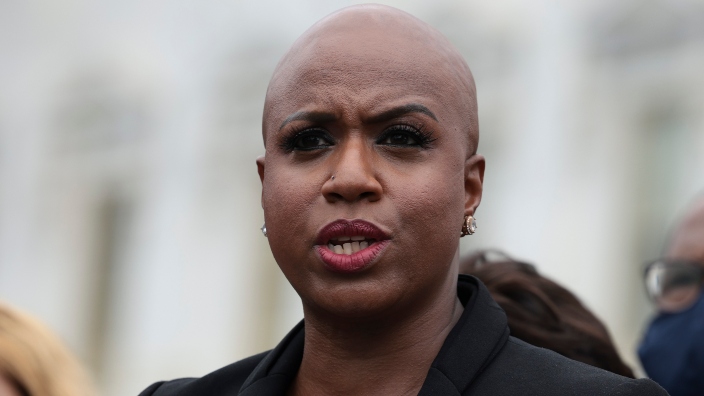 Congresswoman Ayanna Pressley took to the floor of the U.S. House of Representatives Wednesday to recognize the 46 transgender or gender non-conforming people who have been murdered in 2021.

Pressley, a Massachusetts Democrat, said she was making the speech in recognition of Transgender Day of Remembrance.

The two-term congresswoman said the day was founded in 1999 to memorialize the murder of Rita Hester, a transgender woman who was killed in Allston, Massachusetts, a town in Pressley’s congressional district.

“The cruelty of transphobia is a threat that we must confront and root out wherever it exists,” said Pressley, “whether in music or on television or in the hallowed halls of the nation’s capital. There is no place for hatred because someone is brave enough to show up exactly as they are and to live their truth.”

Pressley noted that “we have been robbed of 46 souls” and that the victims were disproportionately Black or Latinx. “On the floor of Congress,” she said, “we speak their names.”

The congresswoman then called out their names, remembering the victims of fatal violence against the transgender and gender non-conforming community in America just this year.

The Human Rights Campaign, a leading LGBTQ advocacy group, says 2021 has seen more transgender people fatally shot or killed by other violent means than 2020 — which was previously the most violent year on record since the HRC started tracking the crimes in 2013.

Listing their names on its website, the HRC writes, “These victims, like all of us, are loving partners, parents, family members, friends and community members. They worked, went to school and attended houses of worship. They were real people — people who did not deserve to have their lives taken from them.”

Pressley declared Wednesday that we must hold space to celebrate the lives of those who have been lost.

“Transgender people are community organizers, military soldiers, justice seekers,” said Pressley, “who put their bodies on the line domestically and abroad to fight for a safe and equitable society.”

In her conclusion, the congresswoman said that “most importantly, transgender people are beacons of hope and pillars of courage serving as a living testimony of what it means to be unapologetically you.”