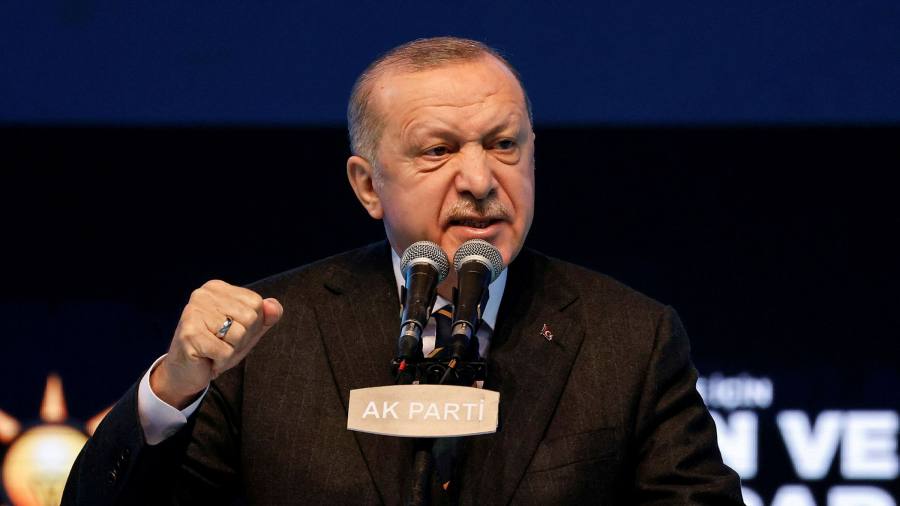 In his drive to turn Turkey into an indispensable power across the Middle East, north Africa and Central Asia, and to ensure his almost one-man rule is unassailable, Recep Tayyip Erdogan is finding he has less space for manoeuvre than he could wish.

Not for the first time, in recent weeks he has been bumping uncomfortably up against the US, Turkey’s formal long-term ally within Nato, and its episodic ally of convenience, Russia.

Erdogan had been buoyed by a string of apparent successes for his muscular foreign policy, defying not just Washington and Moscow but also member states of the EU, to which Turkey is still formally a candidate for membership.

Using drones, militias and mercenaries as well as Turkish forces, he turned the tide of the civil war in Libya (with Russia and France on the other side); helped the Turkic state of Azerbaijan reconquer disputed territory from Armenia (in the Caucasus, which Russia considers its sphere of influence); and is putting down roots in northern Syria in enclaves from which it is pushing back US-allied Kurdish fighters.

Where Ankara sees the rightful assertion of Turkish influence, its Nato allies worry about a neo-Ottoman push for regional hegemony. Their alarm — and Russia’s — has grown as a result of Turkey’s maritime claims to big stretches of the Black Sea, the Aegean and the east Mediterranean, under an expansive doctrine known as “blue homeland” (“mavi vatan”).

Erdogan has shown he can temper his adventurism with pragmatism. He is mending fences with Saudi Arabia, the United Arab Emirates and Egypt, the three Arab states that blockaded his Gulf ally Qatar in 2017-20 — and who he believes were part of a conspiracy to topple him in the abortive mid-2016 coup in Turkey, alongside the US and some Europeans. He had also dialled down tensions in the east Mediterranean, the scene of a scramble for offshore gas riches as well as a clash of irredentists.

But while Turkey and its age-old neighbour and adversary Greece were due to resume negotiations on Wednesday, its navy recently staged two maritime stand-offs with Greek Cypriot exploration vessels. On the eve of the Greek talks, Erdogan airily dismissed the “fabricated maps” of the European imperialists who parcelled out the Near East after the collapse of the Ottoman Empire a century ago.

But while it is easy to rail against an EU that blows hot and cold, navigating between the US and Russia offers less wriggle room as Erdogan has been reminded recently.

To the extent that Donald Trump, the former US president, had a coherent foreign policy, it usually served as a shield for Erdogan, along with fist bumps and admiration of his autocratic ways.

Things with Joe Biden are different. Turkey and America have long been at loggerheads. This is mainly over the US alliance with Syrian Kurdish forces that still control most of north-east Syria and are linked to Turkish Kurd insurgents of the PKK, and Ankara’s purchase of the S-400 air defence system from Moscow, seen by alliance strategists as a cuckoo in the Nato nest.

But now Erdogan is indignant that Biden did not make time to see him in New York at the UN General Assembly. “I cannot say things have got off to a good start with Biden,” he said, demanding a refund for being kicked out of Nato’s new F-35 jet fighter consortium and vowing not only to buy more S-400s but deepen defence ties with Russia in areas from aircraft to submarines.

Erdogan’s declarations may have been designed to smooth his relationship with Vladimir Putin. Yet the meeting with the Russian president in the Black Sea resort of Sochi was unusually short, especially after an 18-month hiatus in what had been regular contacts. It ended without the usual press conference in which the two strongmen showcase their mutual admiration.

The meeting was also preceded by acrimony. At the UN, Erdogan reiterated that Turkey would never recognise Russia’s 2014 annexation of Crimea. He has also agreed to supply Ukraine with Turkish Bayraktar TB2 drones — the decisive weapon in Libya and Azerbaijan’s war in the disputed territory of Nagorno-Karabakh. Russia also has carried out scores of air strikes in northern Syria — emphasising that Turkey’s presence in four areas there ultimately needs the blessing of Putin, who meanwhile cozied up to Greece and Egypt.

Erdogan’s rhetorical barbs against the Americans play well to his fans at home but cannot mask the intrinsic intractability of his relations with the Russians. Nor can he simply ignore Turkey’s dependence on Europe for trade, investment and technology transfers. The country’s currency is again under siege and the president’s popularity is sinking.

After lobotomising Turkish governance, it is tricky to go up against greater powers in the badlands surrounding Turkey. With a tamed media that hangs on his every outburst, and an inner circle shorn of all dissonant opinion, Erdogan has all the power he sought but no way of testing how to wield it.