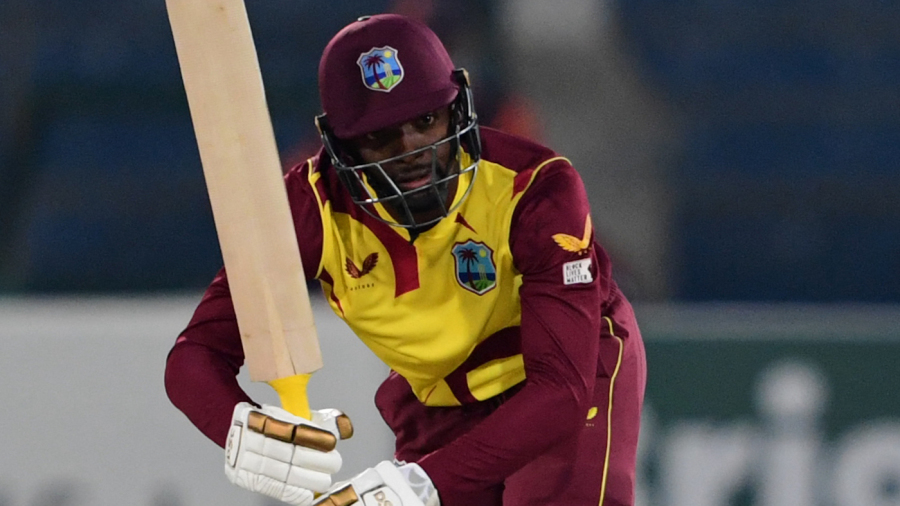 Shamarh Brooks hit 93 off 89 on ODI debut as West Indies recovered from a shaky start to beat Ireland by 24 runs in the first ODI of a three-match series.

Choosing to field at Sabina Park in Kingston, Ireland’s bowlers had the home team in early trouble, with West Indies slipping to 62 for 4 in 19 overs. They had started steadily, being 59 for 1 at one point, though the run rate dawdled at the three-and-a-half mark. But three wickets fell in the space of 2.2 overs, and captain Kieron Pollard strode out to join the debuting Brooks, who had come in at No. 4.

Together, the two put on 155 runs in just 136 balls, having begun cautiously given the rush of wickets, but opening out as the partnership progressed. Brooks reached his half-century in 61 balls at the end of the 36th over, and Pollard hit a hat-trick of sixes against Andy McBrine to go from 41 off 49 to 59 off 52. The over went for 23 runs, Brooks also finding the boundary later on.

Pollard had begun his acceleration earlier, but eventually fell for a 66-ball 69, caught at long-on in an attempt to hit his fifth six.

Brooks fell seven short of his hundred, missing out on becoming only the second West Indies player to score a century on ODI debut after Desmond Haynes, when he was trapped lbw by Mark Adair in the 45th over. Some meaty hits by Odean Smith pushed West Indies past 250, but wickets continued to fall and they were bowled out in 48.5 overs.

Ireland lost former captain William Porterfield for a duck in the second over, but captain Andy Balbirnie, the other opener, and Harry Tector, at No. 4, did well to keep Ireland on track. Ireland did have another hiccup before the two got together, though, as McBrine was forced to retire hurt when he and Balbirnie had got a good second-wicket partnership going. McBrine copped a blow on the helmet from Smith in the 16th over, and went off at the end of the next. He had a concussion and Ireland had to bring in Neil Rock at No. 9 as a substitute.

Balbirnie and McBrine had added 61 in 91 balls before McBrine went off, looking set on 34 off 50. However, Ireland’s momentum didn’t stall as Tector allied with Balbirnie for an even bigger stand.

Ireland were well in control at 165 for 1 in 36 overs, with 105 needed in 84 balls and both batters having passed half-centuries, but Romario Shepherd then had Balbirnie edging behind for 71 off 94. In the next over, Smith had Tector caught at third man off a slash for a 68-ball 53, and Ireland had two new men at the crease.

The wickets fell in a heap after that, and although George Dockrell (30 off 25) and Mark Adair (21* off 9) hit out, no other batter got into double-digits.

Ireland were eventually bowled out in 49.1 overs.