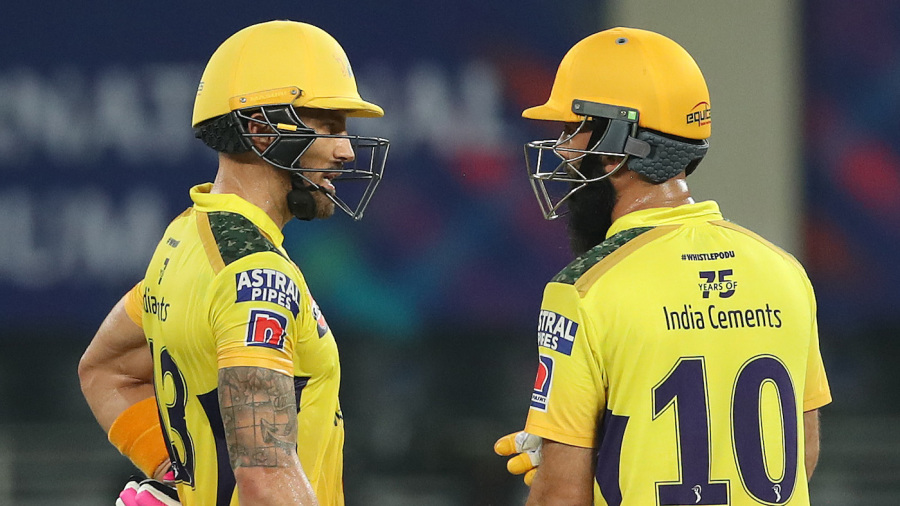 Chennai Super Kings made good on their promise to erase last season’s aberration, as one comeback story trumped another in the IPL 2021 final: MS Dhoni and his team put an end to Kolkata Knight Riders’ rollicking second half of the season as they picked up their fourth IPL title.

Sign up for ESPN+ and catch match highlights of the final here in English, and here in Hindi (US only).

No team, barring Sunrisers Hyderabad in 2016, has won the title after finishing outside the top two since the playoffs system was introduced in the IPL, and Knight Riders didn’t come close to turning that around. Having elected to bowl, they endured one of their worst evenings in the field since the tournament moved to the UAE, with Super Kings’ top order not letting their spinners settle down, while taking plenty off their fast bowlers. Faf du Plessis led the charge, making 86 as he anchored half-century stands for each of the three wickets that fell during the course of Super Kings’ 192. Robin Uthappa and Moeen Ali played their parts with the bat before Shardul Thakur ended Venkatesh Iyer’s innings – and a dangerous opening stand – to cut Knight Riders’ middle order open and consign them to their first defeat in an IPL final.

du Plessis shows up again for Super Kings
The previous two times – that is, 2018 and 2019 – when Super Kings reached the IPL playoffs, du Plessis managed to get a half-century in one of those big games. He did it again in IPL 2021, this time with a free-flowing 86 in the biggest game of the lot.

His innings tonight ended off the last ball of the innings, and meant the tournament finished with the top two run-getters being from Super Kings, his opening partner Ruturaj Gaikwad being the other. Tonight, the pair put Super Kings into top gear as soon as the final began. Gaikwad’s method usually leans towards safety-first early in the innings, but he flipped the script when Knight Riders brought on a favourable match-up: Shakib Al Hasan bowled two overs in the powerplay and Gaikwad, who has never got out to a left-arm spinner in the IPL and has scored at over ten an over against these bowlers, decided he wouldn’t miss out. He got two boundaries and a six against him in those overs, even as it became apparent this pitch had nothing close to the traits of Sharjah’s.

But Knight Riders managed to keep him in check towards the end of the powerplay, and his 32 off 27 when he fell to Sunil Narine in the ninth over, would look unflattering by the end.

Then, du Plessis and Robin Uthappa – who got 63 in Super Kings’ last game – took the attack on through the middle overs. Once again, it was through Shakib that the shackles broke, his third over fetching a six each for du Plessis and Uthappa. That 63-run partnership off 5.2 overs involved a six in every over but one, not counting the over in which the pair was united. du Plessis also tucked into Lockie Ferguson’s back-of-a-length deliveries for picturesque boundaries, the highlight a back-foot punch over extra cover.

A tiring du Plessis managed only 34 off his last 24 balls, but the sixes never would stop for Super Kings. Moeen Ali, back at No. 4 after a short-lived Shardul Thakur experiment in their last match, hit three of them. By the end of the innings, it was ten sixes, three consecutive half-century stands and a score of 192 after being put in to bat in a final. The only thing Super Kings would have worried about at that stage was how good the pitch still was, and the prospect of dew.

Knight Riders’ off day in the field
Knight Riders’ path to the final after qualifying had one thing in common – they bowled first, strangled two teams, and chased when batting got easier. The first part of that went alright in the final, Morgan won the toss and elected to bowl. But the parallel ended there. Shakib was able to be economical bowling early in the innings in Sharjah but was taken down by Gaikwad in the powerplay. Dinesh Karthik missed a stumping of du Plessis early on and their go-to fast bowler, Ferguson, went for 56, his most expensive IPL spell. Morgan himself misfielded twice in what became Knight Riders’ worst bowling innings of the UAE leg.

Dhoni drops Iyer, Gill saved by wire
Venkatesh Iyer was reprieved off the second ball of his innings, MS Dhoni putting down a routine catch going reverse-cup to his left after Josh Hazlewood had induced an edge. Iyer went on to make his fourth fifty of the season, managing especially to pick the gaps in an off-side ring that at one point had six fielders. He also showed off what has become a trademark swing to the leg side the ball immediately after he was dropped. Dhoni was duly forced into bowling Dwayne Bravo over Ravindra Jadeja after a wicketless powerplay of 55 runs. When Dhoni had no choice but to bring on Jadeja, Iyer managed two sixes over the leg side to hit him back out of the attack.

The other fifty, Shubman Gill’s, might not have happened if Ambati Rayudu’s catch running in from deep midwicket had stood. It didn’t stand because the miscued slog touched the spidercam wire on its way down, rendering the ball dead immediately. Dhoni, at that point, was shaking his head in frustration. Knight Riders’ opening stand put up 91 in 10.4 overs.

Thakur brings Super Kings back, Knight Riders crumble
Super Kings needed wickets, and Shardul Thakur was the man who delivered. Iyer looked to launch him on the up over extra cover and ended up slicing it high for Jadeja, who held on with his fingertips before wrapping his palms around it at sweeper cover. The sense of relief for Super Kings was palpable at that point as they jogged towards Jadeja. A small opening had been made, but the required rate was hovering about ten and Knight Riders had nine wickets in hand.

But Thakur struck again in the same over. An injured Rahul Tripathi wasn’t available to come in, and Nitish Rana came in at No. 3. Thakur’s cross-seam delivery stuck in the pitch and Rana’s drive on the up only meant a catch at mid-off for a first-ball duck.

Narine came in at No. 4, Dhoni went to his fastest bowler immediately, and Hazlewood ended that gambit in two balls.

At that point, 91 for 0 had turned to 97 for 3 in six legal balls, and that would turn to 120 for 6 by the end of the 15th over. Here’s how: with the momentum swinging their way, Dhoni went back to Jadeja to try and tie Knight Riders down further, and he got Karthik and Shakib in one over, immediately after Deepak Chahar had ended Gill’s laboured 51 off 43. There would be no other double-digit score for Knight Riders outside of the openers’ until Ferguson and Shivam Mavi found some boundaries, but by then the match was well beyond Knight Riders’ reach.