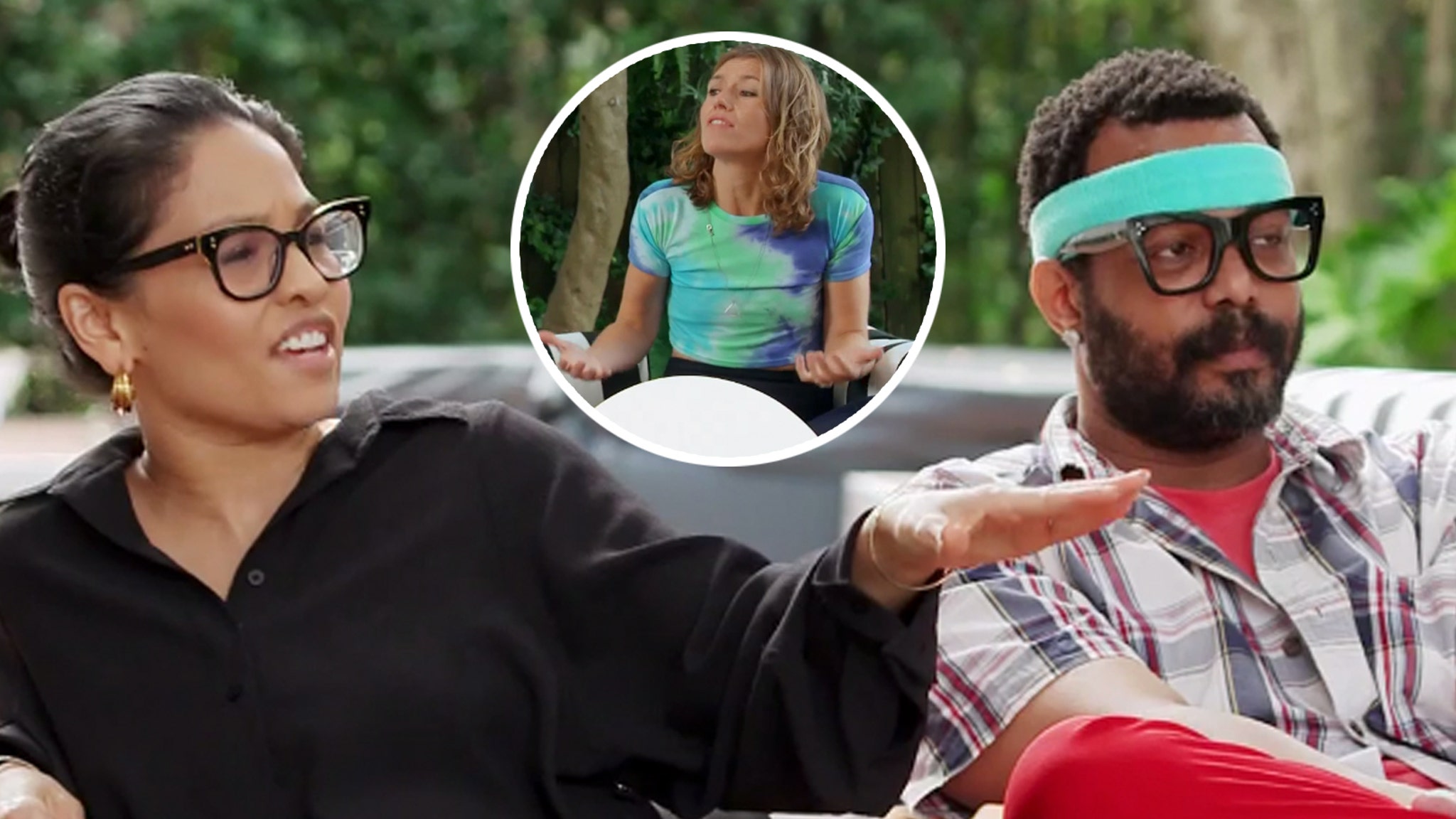 “I’m not getting involved in this masterful level of gaslighting … that’s really gross.”

As viewers have seen on the first two seasons of “The Real World Homecoming,” the more things change, the more things stay the same — and on Wednesday’s new hour of the New Orleans revival, the group found themselves revisiting their past conversations about race, before sparking totally new ones.

White privilege and optics have already been topics of a few tough conversations so far this season, after Julie Stoffer kept telling the other roommates that Tokyo Broom possibly bruised and “manhandled” her while she was drunk. As her roommates pointed out, she had fallen down quite a few times, ran into a tree and vomited all over the place — while he was only trying to help her. While he did physically remove her from the dance floor at one point, he did so with good intentions and both Tokyo and Melissa Beck took issue with the narrative Julie seemed to be perpetuating by focusing on her injuries.

The new episode picked up with Beck and Tokyo trying to explain why Stoffer’s account was problematic, during a house meeting Broom had called.

“I know that your intentions are good. In no way am I like, ‘This Black man came and hurt me.’ Let me just squash that, if that’s the concern,” Julie said, while Tokyo told her she was still creating a “dangerous” narrative with her comments.

“Here’s the part that we’re not talking about … you are here making a television show and I don’t want to be on your show, because I don’t get to decide who I get to be, because it gets to be your narrative,” Melissa then said, referring to a conversation she and Kelly Wolf overheard in which Julie told her husband she was purposefully trying to make “good TV” because the rest of them were, essentially, boring.

Julie, however, wouldn’t really cop to doing anything of the sort and began asking them, “You think I’m fake, you think I want to be a star?” She added, “I don’t want to be the f—ing star of the show. You guys, please, pick up the mantle, do something so this show is interesting so I don’t have to be the center of attention.”

As Tokyo tried to get the conversation back on track, hoping to explain why her comments created bad optics, Danny Roberts briefly took Julie’s side — saying they were forced to leave the bar by Tokyo and it wasn’t really a conversation. He also said how everything was handled was “a bit violent,” before acknowledging he didn’t realize Julie was as drunk as she was until later.

“Showing bruises and implying that he was the person who gave them to you is violence,” said Melissa.

But Julie wasn’t hearing it and implied that Melissa was only jumping in on this because she wanted a reason to go after Stoffer for their past drama, which is also unresolved. “You’re just looking for something that I f— up on so you can make me into the villain,” she said, before calling Melissa “calculating.”

“I have not been waiting for this moment. I’m not making you a villain. I’m not making or doing anything,” Melissa shot back. “He doesn’t want to be your roommate because you’re dangerous. You’re doing dangerous white woman s—.”

Julie then began to get emotional as she talked about being “horribly embarrassed” by her actions the night in question and expressed concern about what her kids would think when they saw it. With that, Melissa was done.

“Now we’re getting into the tears. I’m not doing none of that,” she said, walking out. She was later seen talking to Kelley in her bedroom, saying Julie was the “calculating” one in the house. “I’m not getting involved in this masterful level of gaslighting, where she can masterfully turn it back around and make everyone feel for her. Not doing that. I didn’t come here for that,” she said.

“I can’t be in a space where she’s creating a narrative around an actual Black person that exists, who’s going to have to go back out into the world with it being said that when he was in the service of helping her, he instead hurt her,” she added. “That’s really gross.”

She also expressed the Catch-22 she found herself in, saying she had to stand up for Tokyo, but at the same time didn’t want to be labeled an “Angry Black lady” for simply calling out something that needed to be called out.

After that conversation, Julie was considering leaving and started calling both Kelley and Melissa “Mean Girls” in her confessional. “They’ve been waiting for this,” she said, “F— these women. I’m not doing the Mean Girls thing.”

The racial conversations kept going as they were all called to the couch to watch some flashback videos from the original season that showed the group on a swamp boat tour. At the time, their tour guide dropped the n-word in front of the cast while referring to a bird as a “[N-word] stork” — while Melissa’s white costars, especially Jamie Murray, didn’t understand or appreciate her outrage. They followed that up by taking another boat ride, which thankfully did not include another racist guide but did end with Jamie apologizing for his past behavior. “I was insensitive … that was f—ed up,” he admitted.

In this week’s episode, the roommates look back at the conversations about race and Melissa opens up about receiving hate mail after the original season aired 22 years ago.

Back at the house, yet another video montage lured them back to what Julie referred to as the “couch of doom.” This one focused on Melissa having to be, as she called herself, the “house educator on all things race” — and included footage of her teaching Julie why she wasn’t allowed to say things like “colored” and the n-word.

“So, have y’all gotten your s— together?” Beck quipped after the highlight reel played. She then explained that she felt the show made some “missteps” back in the day when it came to race conversations, which seemed to be told through a white lens and maybe weren’t framed correctly. She (rightly!) felt she shouldn’t have received hate mail at the time for pointing out racism and believed “all of us should have been obsessed with race,” not just her and Tokyo.

As Julie said that, at the time, she didn’t think she had even “met a Black person at that point in my life” before coming on the show, some crosstalk between her, Julie and David started — before Stoffer blurted out, “It’s not easy when the teachers are screaming at me. This isn’t a very comfortable environment”

“The teachers are screaming? It shouldn’t be comfortable,” Melissa responded. “We’re talking about racism. The first thing you should do is not jump to, ‘I was being screamed at,’ instead of, ‘I was involved in a very hard conversation around race that didn’t go well.'”

At that point, Julie felt that, once again, her past issues with Melissa were making this conversation go off the rails — but spoke about how she had (hopefully) changed in the 20+ years since they filmed the original season.

“I think the Mormon Church is very racist, I do and that’s the environment I was raised in. There were all kinds of things I was brought up thinking and believing, horrible stereotypes,” she said, “and I’ve spent decades, if not a lifetime, trying to make sense of it and deconstruct it and build myself up as, I hope, that I’m anti-racist.”

She then finally acknowledged what David and Melissa were trying so hard to get her to understand.

“I have this selfish night and that ends up being a threat to you and that’s not even in the realm of my consciousness because I’m living my little privileged life,” she said. “That’s where I’ll just apologize and forgive me my trespasses while I’m here, because I’m gonna mess up more. Try and let me do better, I just want to be better.”

David said in a confessional he believed she was being genuine, while Melissa later acknowledged that her “tone was stank” with Julie during that second conversation. She approached Stoffer shortly after and apologized. “You got beat up today and I was part of that. To you, I say, that wasn’t nice,” said Beck, “now we can continue our weird dance of tip-toeing around each other until we get it together.”

The episode ended with a visit from Melissa’s amazing parents, Shorty and Mercy Howard, who had actually visited their mansion back in the day but were sadly edited out of the show completely at the time. Mercy cooked an incredible spread of food, Shorty cracked jokes and the dinner seemed to bring everyone together, ending the tough hour on a positive note.

We’ll see if they can keep it up when new episodes of “Real World Homecoming: New Orleans” drop Wednesdays on Paramount+