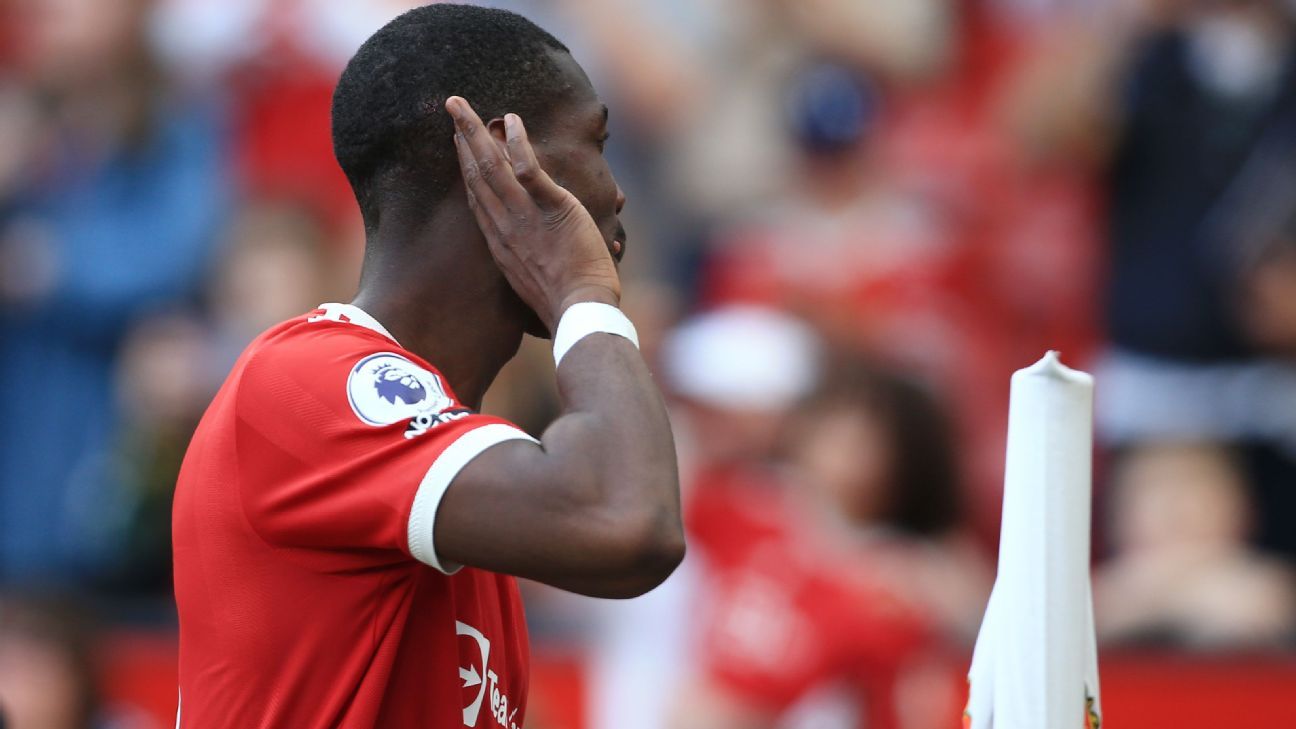 Real Madrid have not given up on the potential signing of Manchester United midfielder Paul Pogba this summer, reveals Sport.

Pogba, 29, is set to leave Old Trafford when his contract expires in June. Sources have told ESPN that the France international would prefer to move abroad rather than stay in the Premier League with Manchester City, who were recently linked.

He is willing to consider all serious offers but sources said he has prioritised a move to either Paris Saint-Germain or Juventus, who reportedly already have offers on the table.

Madrid have already moved to agree a deal for Chelsea defender Antonio Rudiger on a free transfer and are hoping to do the same for PSG striker Kylian Mbappe, but Pogba remains a possibility as they look to freshen their ageing midfield.

12.15 BST: Erling Haaland had a number of clubs to pick from.

Rice, 23, is considered one of the best defensive midfielders in Europe but wants to challenge for trophies, or play in the Champions League.

Chelsea, Man City and Man United have been linked with him, though West Ham want over £100m to complete a deal.

10.56 BST: Colombia midfielder James Rodriguez says he is hopeful of returning to play in Europe next season.

James, 30, joined Qatari side Al Rayyan from Everton in September for an undisclosed fee but is now looking for a new club.

The former FC Porto, Monaco and Real Madrid midfielder, who is currently on holiday in Medellin, said on Twitch: “I don’t know where I will play next season.”

Asked about the possibility of returning to play in Europe, he added: “In a few days’ time the market will open and we shall see… Wherever they want me, I will go… to return to [football’s] elite is an option. Let’s see who wants my left foot.”

Asked about the possibility of returning to his former club Porto, he said: “Why not, it’s also an option. I was very happy at both FC Porto and Monaco.”

10.09 BST: Arsenal have announced that right-back Noelle Maritz has signed a new contract with the club.

Maritz, 26, joined the Women’s Super League side in 2020 from Wolfsburg, making her debut against Paris Saint-Germain in the 2020 Champions League quarterfinal.

The Switzerland international has made 49 appearances, scoring two goals, and has now penned new terms.

“I’m really happy — it’s amazing,” Maritz said in a statement. “I think we have a really good group of girls and the staff is really good. I think everybody has the ambition to take it to the next level and the club is really pushing for it. Hopefully in the future we can make a big step in that direction.”

09.50 BST: Juventus CEO Maurizio Arrivabene has told the club’s fans to be patient with Dusan Vlahovic and allow the Serbia forward time.

Vlahovic, 22, joined Juve in a €70m transfer from Fiorentina in January, but despite scoring seven goals in 18 appearances for his new club, he has not found the back of the net in the last four games.

“Vlahovic is not up for debate,” Arrivabene told Sky Italia. “I remind the Juventus fans of a gentleman called Zlatan Ibrahimovic. In his first season as a Bianconero, there were lifelong Juve fans that were friends of mine who criticized him as much as possible. The following year, he exploded. It’s just a matter of trusting the player and letting him grow in peace. He needs time, let’s give it to him, then he’ll show what he’s worth.”

Solskjaer, 19, impressed for United’s youth teams — scoring an average of nearly a goal per game — but did not make an appearance in the Women’s Super League and the striker has decided not to stay in England. Her father was sacked as Man United manager in November.

09.14 BST: Inter Milan CEO Giuseppe Marotta is “very confident” that Ivan Perisic will sign a new contract to remain at the club beyond this summer.

Perisic, 33, becomes a free agent at the end of the season but wants a two-year deal to remain in Milan. Inter have offered the Croatia winger a one-year contract extension, with an option to extend it for a further season.

“We are not there yet,” Marotta told Sky Italia. “If he wants to stay with us, we have the desire to please him, without giving exaggerated sums. However, I am very confident that this marriage can still be renewed “

Perisic has scored seven goals and set up six more in 33 league appearances for the Nerazzurri this season.

Marotta, meanwhile, praised outgoing Juventus forward Paulo Dybala while saying Inter do not need to strengthen their attack by signing him when his contract expires this summer.

“Dybala is a great player,” Marotta said. “Everyone knows he will be a free agent and hence, he is an attractive option to many clubs. At the moment, we have a high-quality attacking line and we do not have big problems from that point of view. That said, I appreciate Dybala’s qualities.”

Dybala has not been offered a contract extension at Juve and will leave the Turin giants this summer as a free agent. Reports in Italy have stated Inter are leading the race to sign him and have offered the Argentina forward a four-year contract, though his agent denied those claims.

08.54 BST: Real Madrid have agreed a deal to sign Chelsea defender Antonio Rudiger on a free transfer in the summer and The Daily Mail has some information about the finances involved.

Rudiger, 29, had seen interest from Manchester United, Barcelona, Paris Saint-Germain and Juventus, but was looking for a big payrise and even more than the €270,000-a-week that Chelsea were offering him to stay.

The Germany international has reportingly now signed a four-year contract with the LaLiga side worth around €370,000-a-week, plus a signing-on fee, and has a release clause of €400m.

08.29 BST: Barcelona and Aston Villa are in talks to make midfielder Philippe Coutinho‘s loan move to the Premier League side permanent in the summer, various sources have confirmed to ESPN.

Villa have an option to sign Coutinho for €40m at the end of the season but are not willing to invest so much money.

However, with coach Steven Gerrard keen to keep Coutinho, the English club are trying to negotiate a reduced a fee of around €20m with Barca, who are ready to take a huge hit on their €160m record signing.

Goal also claims that Newcastle have entered the race to sign the Brazilian.

Haaland, 21, will move to the Etihad Stadium this summer and is set to become one of the highest-paid players at the club. Sources told ESPN he will not top midfielder Kevin De Bruyne, on around £375,000-a-week, as their biggest earner.

According to ESPN sources, the player’s release clause is €60m and Haaland is set to sign a five-year deal at the Etihad Stadium.

Meanwhile, Dortmund announced the €38m signing of Germany striker Karim Adeyemi from FC Salzburg in a deal that runs until 2027.

Adeyemi, 20, becomes Dortmund’s third signing ahead of next season, with Germany defender Niklas Sule joining the club on a free transfer from Bayern and Nico Schlotterbeck arriving for a fee in the region of €26m from Freiburg.

– Manchester United and Newcastle United are monitoring Napoli striker Victor Osimhen and could be prepared to meet his €100m asking price, writes Calciomercato. Napoli are willing to let him go if the right offer comes in, and it is understood that they believe the Premier League is his only possible destination in the summer. The 23-year-old has contributed to 19 goals in 30 appearances across all competitions for the Partenopei this season.

– Barcelona are considering a move for Tottenham Hotspur wing-back Sergio Reguilon, reports the Mirror. The Blaugrana are looking to find a suitable cover option for left-back Jordi Alba, and it is revealed that Reguilon was added to their shortlist after he lost his place in Antonio Conte’s side. The 25-year-old has made 25 Premier League appearances for the club this season, but has featured just twice since March 20.

– Chelsea are interested in RB Leipzig duo Josko Gvardiol and Christopher Nkunku, reveals Sky Sports Germany. Chelsea manager Thomas Tuchel is reported to be considering the double swoop though he will face competition from Manchester United, who are also keen on Nkunku. The 24-year-old France international forward has scored 34 goals in 50 appearances this season across all competitions, while Gvardiol is considered one of the top young defenders in Europe.

– Barcelona are set to make an offer in the region of €25m to secure a move for Alejandro Grimaldo, according to Pedro Almeida. The 26-year-old left-back has been a standout performer for Benfica this season in 29 league appearances, and with the Blaugrana looking to find another alternative for the aforementioned Alba, it looks as though Grimaldo is also on their shortlist of potential targets for the summer.

– Arsenal are keeping tabs on Serge Gnabry as contract talks continue to stall between the ex-Gunners forward and Bayern Munich, writes Ekrem Konur. Negotiations over a new deal have shown few signs of progress as Gnabry enters the final year of his contract at the Allianz Arena, and Arsenal are looking to take advantage of that by setting up a homecoming return to the Emirates Stadium.