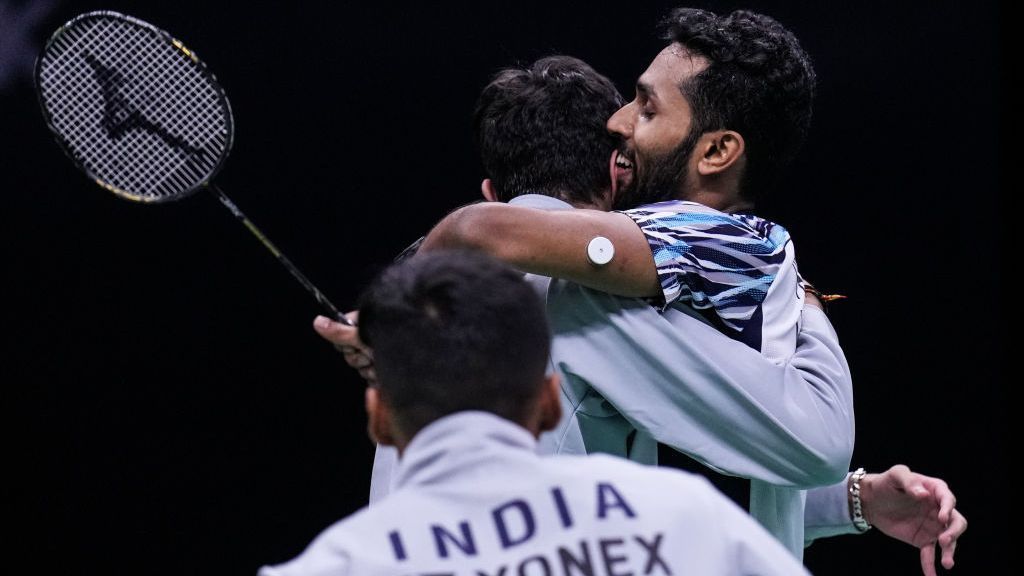 The Indian men’s badminton team has had the most remarkable 48 hours. They first beat Malaysia and then upset former champions Denmark to reach the Thomas Cup finals for the first time in 73 years.

One man was at the center of it all – HS Prannoy. An ankle strain notwithstanding, Prannoy beat Rasmus Gemke to clinch the semi-final win for India. He had done the same in the quarters, both ties ending with him being mobbed on court by the boisterous Indian contingent. Talking to ESPN the morning after the historic semifinal win over Denmark, he attributed the team’s success to its simple mantra – faith.

“Everybody is so pumped! We arrived in Bangkok 10 days ago with full faith in this team and knew how far we could go with this team in such a tournament. That belief was the major factor where things started to turn,” Prannoy says. “I’m extremely happy that we could be in the finals after 73 long years and it’s a huge achievement for all of us in the team because we’ve always wanted this,” he says.

Prannoy spoke about the value of this squad’s depth and how each member stood up when needed. “When Chirag and Satwik did not step up, Srikanth and I stepped up. Yesterday and the day before, both [Chirag and Satwik] stepped up. We must credit Lakshya even though he has not been able to pull off matches because he’s playing against the world’s top-5 players back-to-back. He’s out there playing the best in the business and it’s because of him that we have the depth down the line to go out there and win the matches,” he says.

“Everyone has their [role in the team]… everybody needs to be on their toes and if someone’s not stepping up on that day, then someone else must and that’s how the team event works. It just can’t be a couple of players winning all the matches every time. This year I felt everybody was ready to take up that challenge and everybody just wanted to be on the court. I felt that made a big, big difference.”

We are into the Finals of THOMAS CUP!!!!

Wow I still can’t believe that this is real 😮

At 29, Prannoy is among the senior warhorses in India’s 10-member team that features Kidambi Srikanth, Lakshya Sen and the doubles duo of Satwiksairaj Rankireddy and Chirag Shetty, among the top-ranked players. Prannoy and Srikanth, also 29, got into a huddle earlier in the year to set a vision for the Thomas Cup.

“I’d say Srikanth and I…we’re the aged ones in this team [laughs], the rest all are youngsters. That gave us a sense of belief, not just because they’re youngsters but because all of them were in good form and were playing really well in the last six months. Srikanth and I had a discussion a couple of months back saying we just…we just need to try. We never try fully and need to give it our all to go ahead,” he says.

He then roped in Lakshya, who also felt this was India’s best shot at making a deep run at the Thomas Cup. “I spoke to Lakshya too…we shared a room when he was at the All England Open and I told him we really need to try at this year’s Thomas Cup. He said, ‘Yes we need to try bhaiya, this looks like the best chance for us.’ We had discussions before the event and everyone was really pumped up because they knew…each one of them knew that is the best time for us to prove ourselves in such a big event because we have importantly have the depth in both singles and doubles. I think that’s where the belief stemmed from.”

India will face 14-time champions Indonesia, the most successful team in the tournament’s history, in Sunday’s final. Unfazed, Prannoy and his team are eager to bring home gold.

“The last 48 hours have been a different experience altogether….I’ve never experienced something like this in my life. To be a part of such a big team and to perform like this at this level…we’ve always wanted to perform like this in the Thomas Cup but somehow it never used to happen but this time everything came together. I’m loving it, I’m just loving it. We just want to go out there and win that gold medal now,” he says.