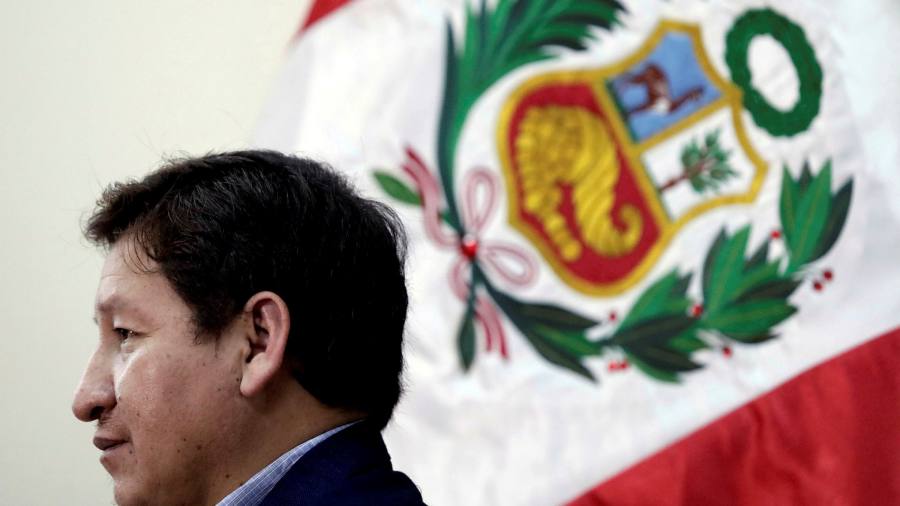 Peru’s leftwing president Pedro Castillo ousted his divisive prime minister Guido Bellido on Wednesday in what appeared to be an attempt to distance himself from the Marxist party that helped to propel him into power.

In a short, televised address on Wednesday, Castillo did not give a specific reason for the forced resignation but said it was “time to put Peru above all ideology and isolated party impositions”.

“I have decided to take some decisions in favour of governability,” he said, adding that he would swear in a new cabinet later in the day.

In a news conference later, Bellido said he did not know why he was asked to quit and that other members of the cabinet had suffered the same fate.

“We don’t know what the causes are. What we know is that today the president has asked us to submit our letters of resignation, and immediately we complied with that request,” Bellido said.

He said he assumed Castillo had acted “according to his convictions and political criteria”. “You can’t ask why or how. You simply have to comply. What the president says is an order.”

Bellido has been the most controversial member of Castillo’s cabinet since the government was sworn in in late July.

A Marxist congressman, he has expressed sympathy for the Maoist guerrilla group Shining Path. On several occasions before assuming office he sought to justify the actions of the insurgents whose war with the state claimed 70,000 lives in the 1980s and 1990s.

While Castillo was in the US last month trying to convince potential investors to come to Peru, Bellido was telling the foreign owners of the largest natural gas project in the country that they should hand over more of their profits to the state or else face nationalisation.

Bellido has also suggested the government should be prepared to shut down congress if it tries to impeach the president or censure government ministers.

His departure is the second in just 70 days of what has been a chaotic and improvised start to Castillo’s mandate.

In August, the 85-year-old foreign minister, a former leftwing guerrilla who defended the regimes in Cuba and Venezuela, quit after just 19 days when videos emerged in which he claimed Shining Path was “largely a product of the services of the CIA”.

Castillo’s labour minister has also been under pressure to quit over his alleged links to the Maoists and is likely to be a casualty of the cabinet reshuffle.

A rural primary school teacher with almost no political experience and no party of his own, he stood as a candidate for Free Perú, the Marxist party of which Bellido is a member. Peruvians and foreigners alike have been watching to see who holds the power in government — Castillo or his ideological backers.

When Castillo appointed Bellido on his first full day in office, it seemed Free Perú had the upper hand and several moderate leftists baulked at joining the government.

Since then, Castillo has sent mixed signals about the direction in which he wants to take Peru, one of the fastest-growing economies in Latin America this century and a big producer of copper, gold, silver and other metals.

Centrists have urged Castillo to move away from the Marxists, while rightwingers have threatened to impeach him if he tries to press ahead with his more radical proposals, including a rewrite of the constitution.

He said Castillo would now have to choose “between the conservative and the revolutionary” when appointing his new prime minister and — in an ominous warning — insisted the new cabinet must not include “rightwingers, bourgeois leftists and traitors”.

“It is time for Free Perú to demand its share of power,” he tweeted.