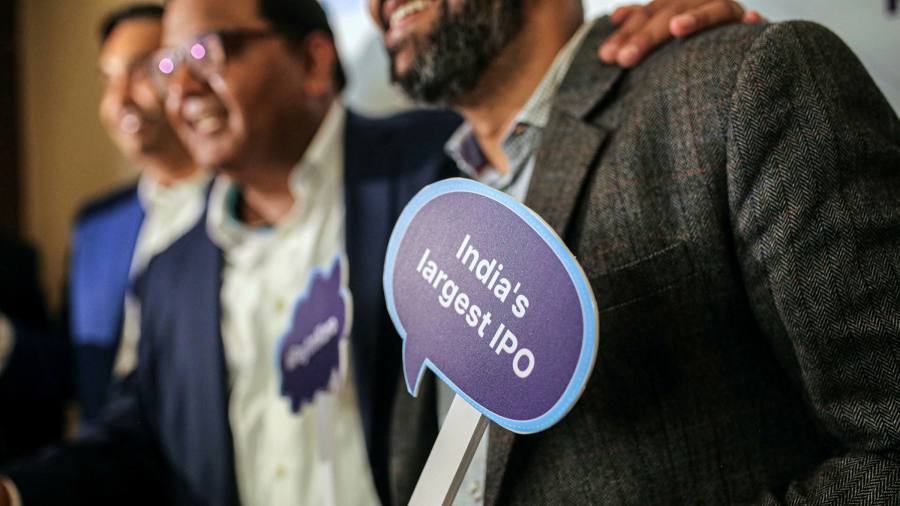 Shares in the recently listed financial services company Paytm plunged for the second day running as traders and bankers blamed one of India’s worst market debuts on an overly ambitious valuation target.

The stock of Paytm, which is backed by Japan’s SoftBank, China’s Ant Group, and Alibaba, closed 27 per cent lower following its listing last Thursday and fell another 13 per cent on Monday after a market holiday on Friday.

That brought Paytm about 37 per cent lower from its IPO pricing and wiped about $8bn from the company’s market capitalisation in just two days of trading, with the chief financial officer saying the plunge was “unexpected”.

Paytm had raised $2.5bn from the IPO, valuing it at about $20bn and lining up a massive payday for its backers. But bankers and brokers familiar with the deal said Paytm’s push for a record listing, investor insistence on a high valuation, weak domestic demand and India’s strict rules for allocating shares to different classes of investors had combined to ensure a damaging fall.

“Obviously the way the stock behaved . . . was unexpected,” said Paytm’s chief financial officer Madhur Deora to the FT. “We’re totally sensitive to the fact that some of the shareholders who have backed us would not have expected this performance either in the share price,” he said.

Critics of the company said Paytm had focused too much on notching a fundraising record, while top backers pushed Paytm to increase its IPO size after filing its draft prospectus in June from about $2.2bn to $2.5bn.

“This is a very specific reaction to how this book was allocated and who was in this book,” said the head of Asia equity capital markets at a Wall Street investment bank, adding that the deal had shown many signs of “pushing the envelope on value”.

A person close to the company argued the deal size was set in response to demand from investors and bankers, as well as the regulatory need to reduce stakes of investors including Ant, which sold off part of its stake after being hit by Indian curbs on Chinese investment last year.

The head of India capital markets at another Wall Street bank said many long-only buyers had participated as anchor investors, who are not allowed to sell their holdings for 30 days and who received more than enough shares from that portion of the deal, which must cover 45 per cent of shares sold.

They were largely absent from the main institutional investor tranche, accounting for 30 per cent of the deal. That resulted in other investors, who had expected only a small portion of their own large orders to be filled receiving far more shares than expected.

The banker said it had been a “real stretch” for bookrunners Morgan Stanley, Goldman Sachs, JPMorgan and Citi to cover the main institutional portion of the book and that many hedge funds “got more than they bargained for”.

That over-allocation to institutional investors was compounded by a 10 per cent cap on retail exposure due to Paytm’s lack of profits, a near-total absence of Indian mutual funds and weak demand from wealthy individuals, who were granted 15 per cent of shares sold.

“All of these guys [institutional investors] got very full allocations and a lot of that is making its way out into the market [through selling],” the banker said.