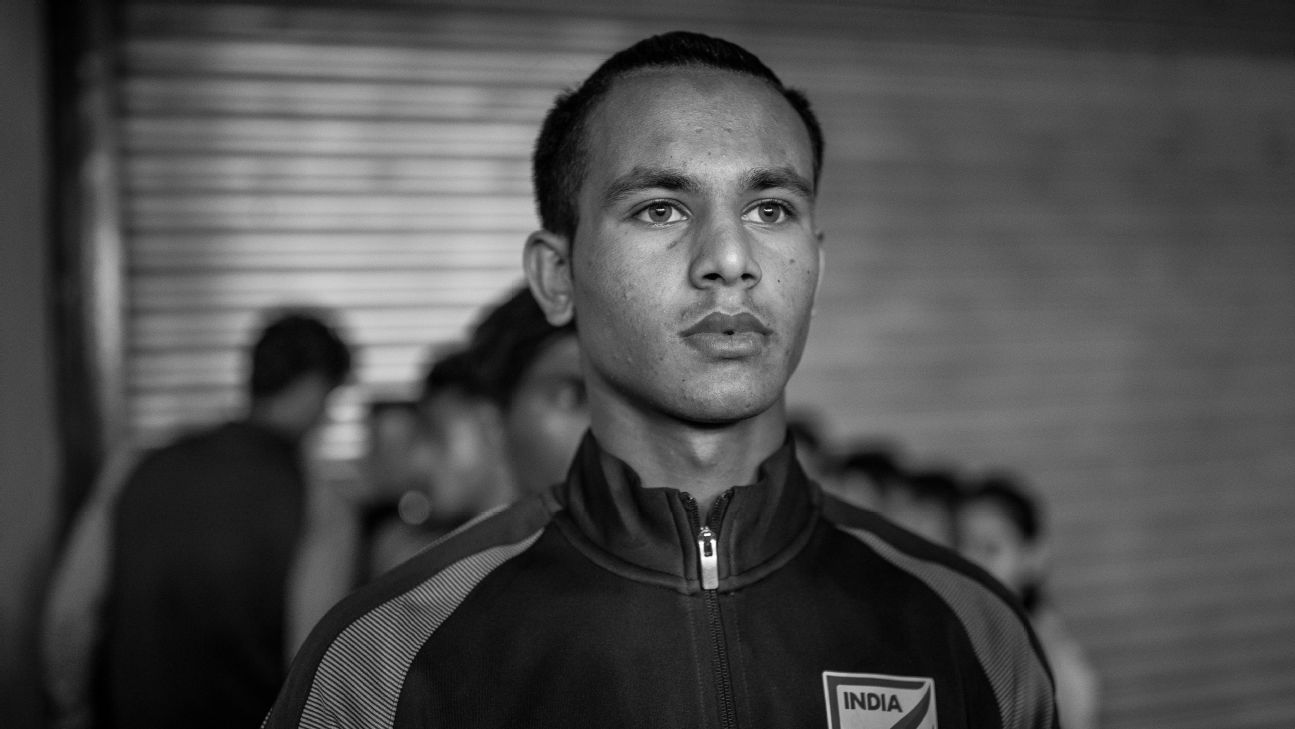 Anwar Ali was surprised at the lack of nerves when he stepped out onto the grass field at the GMC Athletic ground in Bambolim, Goa on Wednesday. A light afternoon training session was all that was scheduled – yet it was a hugely significant moment for the 21-year-old.

After all, it was the first time in nearly two years that Ali was training in the top flight of Indian football. The youngster was signed on a two year loan by Indian Super League club, FC Goa, with the Gaurs set to register him officially when the transfer window opens on the 1st of January, 2022.

The past two years have been a nightmarish period for Ali. His performances at the 2017 U-17 World Cup in India had made him one of the brightest prospects in Indian football. He was a regular for the Indian Arrows in the I-League, part of the senior Indian team camp under national coach Igor Stimac, after which he signed a contract with Mumbai FC in the Indian Super League.

All of which came to an abrupt end following the diagnosis of a rare congenital heart condition – hyper cardio myopathy (HCM) – a condition where the heart muscle wall becomes abnormally thick and affects the pumping of blood. Undiagnosed, it can have severe consequences. In 2012, English footballer Fabrice Muamba, who was later diagnosed with the condition, collapsed on the pitch. While he recovered, the episode was the end of his footballing career.

Two different sets of doctors concluded that Ali’s risk of playing was too high. Subsequently, the AIFF medical committee barred him from playing or even practicing with a professional club. Ali approached the Delhi High Court, challenging the AIFF’s directive. Professor Sanjay Sharma, a fellow of the European Society of Cardiology (ESC) testified to Ali’s suitability to return to competition, and also produced a medical report to that effect. While earlier recommendations of the ESC had advised athletes with HCM to abstain from competitive sports, the latest guidelines published by the same body on August 29, 2020 suggested taking a more ‘liberal approach’. Ali was permitted to play by the Delhi High Court last November, pending a final decision by the AIFF committee.

It was only in August this year that the medical committee too recommended to the AIFF that Ali be permitted to compete after presenting an affidavit admitting full responsibility for his actions – something Ali had been requesting from the start.

It was that decision by the AIFF medical committee that finally cleared the way for Ali to return to the ISL. Ali says he was nervous when he first landed in Goa. “The first day that I came to Goa, I was really tense. I had so many thoughts in my head. I’d been away from this level for so long. Was I still good enough? How would people respond?” he says. Those doubts vanished the moment he stepped onto the grass field. “When I was out I felt so much pressure. But once I was on the ground, I felt at home. I knew this is where I belong. I was just glad I was back,” he says.

It was a familiar feeling but also, not quite. Despite being granted relief by the courts last year, no ISL team was willing to play him until the AIFF finally allowed him to return. It meant that for nearly a year, Ali played wherever he got the chance. He played on rock covered pitches with scanty grass and uneven slopes in the Himachal Pradesh state league, travelled by minivan to play matches in the lower divisions of Punjab, and competed in front of empty stands in the New Delhi League. Now, with FC Goa, he was staying in a comfortable room, traveling in an air conditioned bus and practicing on the slick turf of an international quality field.

Much like the lower divisions however, adjacent to every field Ali plays in, was the mandatory ambulance with the Automated External Defibrillator, a device he’ll need in an emergency. Ali hardly notices them though – his mind is on the field and the ball.

Ali can only grin though as he compares the two. “Man bohot khush hai. (The mind is really happy)” he says.

It’s not just the ball and the field that are different though. “The thing that I really missed was playing alongside high quality players. As a player you want to test yourself with the best,” he says. A scenario that wasn’t possible as Ali bided his time, waiting for a comeback.

“It was a little difficult to adjust because I had played at a certain level. And then suddenly I was competing with players not of the same standard. Initially it wasn’t easy but I told myself it’s fine. It’s a chance to learn something new. I had to take it as if I was starting my career again. This was almost like a second career for me and I had to start from the bottom once again,” he says.

Ali did manage to make the most of his time in the minor leagues. The records show he’s played more domestic matches than any other player in India since the start of the COVID-19 pandemic – a period where footballing activities nearly ground to a halt country wide. Ali competed in 10 matches in Punjab, six in Himachal, four in the Durand Cup, seven Delhi League games and another seven I-League qualifiers. Impressive in the center back position, he’s also honed his scoring abilities. Belying his defensive position, Ali was the leading goal scorer in the Delhi league until the last couple of matches.

While he was impressive, Ali says he wasn’t expecting to move back to the ISL as soon as he had. He’d expected to join an ISL team only after the winter transfer window opened in January next year. However, when Goa asked the youngster to join them for a pre-season training camp in November, there wasn’t any similar surprise for Ranjit Bajaj, the mercurial owner of Minerva – the Academy where Ali first learned his skills – and the man who had spearheaded the 21-year-old’ s campaign to return to the ISL.

“FC Goa was a team that had been in touch about Anwar for a long time. They had kept in touch with us even when it wasn’t clear that he would be ready to play. They also have a long term plan for him. They have a playing style where they build up their attacks from the back of the field and a central defender in Anwar’s position can do great things in that set up. It was a no brainer really,” Bajaj says of the move.

Ali too was excited about the shift to Goa. “I also like the way Goa play. Their style of building up their attacks will give me more of a chance to be involved in the game. That’s what I want. I don’t want to be hidden away. I want to be part of everything. I’ve always like playing here. I’ve played against Goa many times during my professional career and I’ve also trained here for many months during my time with the U-17 team. I’ve got a lot of good memories associated with this place and I think I can make some more,” he says.

Of course, Ali’s signing meant more than just football. His family of cattle herders had come to depend heavily on the seven figure sum he had earned during his two year contract with Mumbai City FC from 2018-2019. When his medical diagnosis saw him being dropped from his ISL team, his family ended up having to depend on his father’s small dairy business. Often, Bajaj would have to loan the family money in order for them to make ends meet. “It was a really difficult time for my family. After my family lost my salary, we really struggled. There was a little bit of money that came from the dairy business but if it wasn’t for Ranjit sir, I’m not sure what we would have done. He really has been like a second family for me,” says Ali.

It’s evident how important this opportunity is that Ali hasn’t even gone home once since he knew Goa were interested in bringing him over on loan. “I actually have my sister’s wedding coming up, but if it comes in the way of my football, I probably won’t go. This is a second chance that I’ve got. How many people can say they have a second chance at life? I have to make it count,” he says.

Making the most of second chances is just one of the many life lessons Ali has learned over a difficult couple of years. A committed carnivore once, he’s switched to a largely vegetarian diet for one – a lifestyle choice that Bajaj had encouraged him to make shortly after his diagnosis. However it’s his attitude to the sport that he says has seen the biggest change. “My mindset has changed. I’m a lot more positive now. I’ve found it’s helped me push my body more than you thought possible. I know I have a lot more courage in me than before. I wasn’t very mentally strong previously. But after going through so much stress, I think I’ve learned to manage it a lot better,” he says.

It will need the power of all of Ali’s positive thinking, if he has to once again match the expectations many had of him becoming a mainstay, not just in the ISL but the Indian team. There are no shortage of well-wishers. “I got a lot of messages from my teammates in the India U-17 team who are now playing in the U-23 squads. They said they were looking forward to playing with me in the national team once again. They were saying if I had a couple of good years, there no way I can’t be back in the Indian team,” he says.

Yet, Ali isn’t looking anywhere near that far ahead. It’s another lesson he’s learned over the past couple of years. “I’ve stopped making long term plans. In the past, I played football thinking I’d always be playing. Then I faced a situation where I wasn’t even sure I’d play again. Now I think I have to make every day count. There are no small days. People say I can make it to the Indian team, but I don’t think that far ahead. I just think about what I have to do the next day. Even if it’s just a light training session. That’s all that I will focus on,” he says.